EghtesadOnline: U.S. liquefied natural gas was supposed to go mainly to Asia and Europe, lured by prices as much as four times higher than those at home. So far, South America has been the destination of choice.

Thanks to a global glut that depressed prices, Cheniere Energy Inc. has sent more than half of the LNG tankers from its Sabine Pass terminal in Louisiana to South America. Premiums once available in Asia and Europe disappeared and those regions are well-supplied from elsewhere.

According to Bloomberg, the U.S. is poised to become a major player in global LNG markets as a rising supply of shale gas provides more than the domestic market can absorb. Latin America is hungry for the power plant and heating fuel from its northern neighbor as the region lacks reliable energy sources of its own. The regional trade is easier aslarger tankers can now use the Panama Canal, cutting travel time and cost.

“It’s certainly been good timing for all the parties,” said Ted Michael, a Genscape Inc. LNG analyst in Boulder, Colorado. “Cheniere is coming on and Latin America is looking for a more consistent supply.” 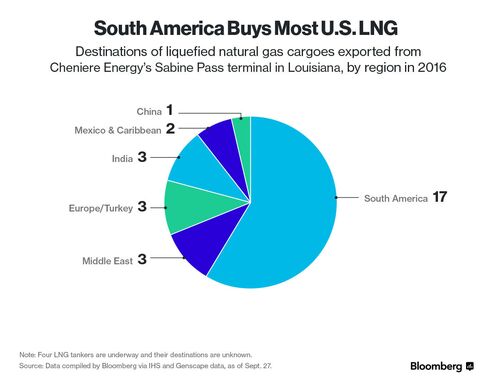 Seventeen of the 33 cargoes shipped from Sabine Pass have gone to South America since exports began in February, according to vessel-tracking data compiled by Bloomberg. Chile was the leading recipient with nine, three of which traversed the expanded Panama Canal. The canal can cut travel time to Chile from the U.S. Gulf by about 11 days, according to Bloomberg New Energy Finance.

A shipment to Chile cost $5.60 per million British thermal units from Sabine Pass in July, according to data from the U.S. Department of Energy. The average month-ahead price in the U.K. was $4.63, according to ICE Futures Europe, while spot LNG in Singapore traded at an average of $5.16 in July. U.K. gas slumped 45 percent in the past two years and spot LNG tumbled 60 percent. U.S. gas futures declined 25 percent in the period.

In Brazil, the biggest LNG importer in South America, LNG demand will vary depending on hydro, analysts Anne-Sophie Corbeau and David Ledesma wrote in a book published this month, LNG Markets in Transition: The Great Reconfiguration.

Future LNG demand in Argentina, where gas use is typically higher in the Southern Hemisphere’s winter, will in part depend on development of its own unconventional resources, they said. Chilean LNG demand is forecast to increase for use in power plants, industry and at homes, according to the analysts.

“The fact that most of the early Cheniere exports are heading to Latin America is not surprising, given that the region is relatively close geographically,” Alex Tertzakian, an analyst with Energy Aspects Ltd. in London, said in an e-mail. “In the longer term, the region’s LNG demand story is not looking particularly bright.”

Headwinds include use of renewable energy in Brazil and Chile, as well as increased gas production in Argentina and Brazil, he said.

While Latin America offers a pocket of demand, the region won’t be able to absorb all volumes from the U.S., Costanza Jacazio, a senior gas analyst with the Paris-based International Energy Agency, said in a telephone interview.

“We should really wait for U.S. LNG exports to ramp up to have a better understanding of the geographic distribution,” she said.

The shipments will eventually come to Europe, Carmen Lopez-Contreras, a senior analyst at Madrid-based Repsol SA, said at a conference in London Sept. 21. The region has spare terminal capacity and liquid hubs to absorb the fuel.

Back in 2010, Charif Souki, then chief executive officer of Cheniere, said volumes to South America would be flowing “to some extent” and “in the second phase,” while envisioning Europe and potentially Asia as the main markets.

At the moment, there’s little need for American LNG in Europe and Asia. No U.S. LNG has landed in northwestern European markets yet, and only one cargo was delivered to China, the world’s third-biggest LNG buyer.

Asian demand is slowing amid restarts of nuclear capacity in Japan, the biggest LNG buyer, and previous over-contracting for the fuel. Some regional buyers are selling surplus volumes, orseeking to swap U.S. fuel with European companies to cut costs, turning into traders. Meanwhile, Australia is set to overtake Qatar as the biggest exporter of LNG, giving Asia a growing alternative to U.S. gas.

Before global prices collapsed and demand outlook turned gloomier, Cheniere sold future LNG shipments to Asian customers including Gail India Ltd. and Korea Gas Corp. U.S. LNG is flexible, without destination restrictions, meaning it can be resold across the globe so this gas may not end up in Asia.

In Europe, U.S. LNG competes with other suppliers such as Qatar. Pipeline-gas exporters Norway and Russia have both said they plan to ship record volumes to Europe this year.

Those realities were underscored earlier this year when Credit Suisse Group AG analysts in a research note predicted that U.S.-sourced LNG appears to be priced out of Asia until 2018 and extremely “border line for supply to Europe.”

As global export capacity surges 45 percent by 2020, the U.S.’s share will jump to 14 percent, according to Energy Aspects. That may keep Latin America a lucrative market.

“The European Union is more of a market of last resort,” said Michael of Genscape. “In Latin America, they don’t have the same alternatives for gas. They do not have coal generation, and they are heavily dependent on hydro power.”