OPEC May Finally Be Willing to Curb Oil Glut, Just Not Yet

EghtesadOnline: After two years of pumping without limits, OPEC may finally be ready to do something to shrink the global glut. Just not quite yet.

According to Bloomberg, Saudi Arabia has offered to reduce production to January levels, according to Algeria’s Energy Minister. That would remove about half of the kingdom’s 1 million barrel-a-day increase in output since it led the Organization of Petroleum Exporting Countries’ push to defend market share in 2014. While Iran was said to have rejected the Saudi offer, the chance of the group eventually taking action is growing, said consultant JBC Energy GmbH. 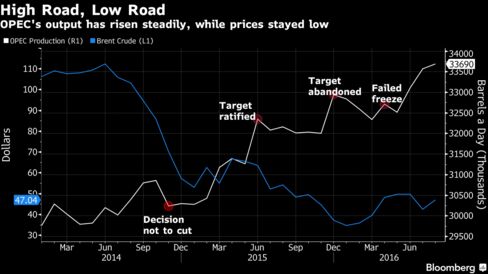 “The Saudis and the Iranians are talking and they’re not as far apart as they were in the Doha meeting” in April when a proposal to freeze output failed, said Michael Poulsen, an analyst at Global Risk Management Ltd. “The symbolism would be more important than the actual number in the event that something is agreed to be cut.”

OPEC’s decision to abandon its long-standing strategy of supporting prices by cutting production has defined the market since November 2014. Members, led by Saudi Arabia, have boosted output almost 10 percent to 33.7 million barrels a day. That’s driven U.S. output down 11 percent, but also hammered oil exporters’ own economies as prices languish at half their level two years ago. With the International Energy Agency forecasting a fourth year of surplus in 2017 as non-OPEC supply proves resilient to low prices, the strategy may be shifting.

“The chances that OPEC will take some action over the remainder of the year –- although probably only at the regular meeting in Vienna on 30 November –- appear to be rising,” Vienna-based JBC said in an e-mailed note. A surplus of 2 million barrels a day looms early next year and “in such an environment, players as diverse as Iran, Russia, and Saudi Arabia would probably find common ground.”

West Texas Intermediate crude rose as much as 3.9 percent to $46.20 a barrel in New York Monday amid speculation that the door was opening to a future OPEC agreement. The U.S. benchmark fell 4 percent on Sept. 23 after Saudi Arabia indicated it didn’t expect any deal in Algiers.

More than 800,000 barrels a day of additional crude is entering the global market this month compared with August. Libya and Nigeria are restoring disrupted supplies, according to statements from ministry officials. Russia, the largest non-OPEC producer that will also be present in Algiers, is pumping at a post-Soviet high. The Kashagan field in Kazakhstan, one of the largest oil projects in the world, is due to start next month after years of delay.

World oil stockpiles will continue to accumulate through 2017, according to the IEA. Consumption growth sagged to a two-year low in the third quarter as demand faltered in China and India, while record output from OPEC’s Gulf members is compounding the glut, it said. Just last month the agency predicted the market would return to equilibrium this year.

The oil market is in a “much more critical” state than when OPEC last met three months ago, Algerian Energy Minister Noureddine Boutarfa said Sunday in an interview with Bloomberg television. Now is the “right time” for OPEC to reach an agreement, said Falah Al-Amri, Iraq’s governor to the group.

While Saudi Energy Minister Khalid Al-Falih said Sept. 5 that there was no need to cap production because markets are trending in the right direction, the kingdom is not immune from the pain of low prices. Foreign reserves have declined by almost a quarter in the past two years and the country is weighing plans to cancel more than $20 billion of projects and slash budgets to repair finances.

OPEC’s price war may now have reached its natural conclusion, because the group has little to gain from seizing an even greater share of the global oil market, according to Bank of America Merrill Lynch.

“OPEC government budgets are very strained after a two-year price war” and members aren’t investing enough in new projects to be able to keep increasing output, the bank said. The group’s share of global oil sales has expanded to 35 percent from 33 percent in the past seven quarters, it said.

“If the cartel keeps increasing output, the market will not move into deficit and oil prices will stay low,” Bank of America said. In the medium to long term, Saudi Arabia would be better off “capping output and allowing prices to rise.”

It’s far from certain whether talks in Algiers can overcome longstanding rivalries to deliver an agreement, or even a road map to a potential supply deal when OPEC meets again in November. 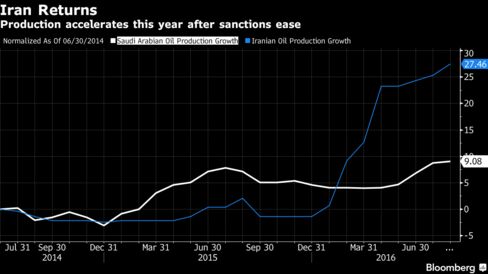 A proposal in April for OPEC and other producers including Russia to freeze production failed because the Saudis refused to agree without the participation of Iran, which wanted to keep increasing output following the removal of international sanctions.

Negotiations in Algiers will be “warm up” for OPEC’s next full meeting in November, Iran’s oil ministry news service Shana reported, citing an interview with Oil Minister Bijan Namdar Zanganeh. The Gulf nation was said to have refused last week to cap its output at the current level of about 3.6 million barrels a day in exchange for Saudi cuts. Iran has said repeatedly that it intends to expand production to 4 million barrels a day.

No leeway will be given to members who would want to be able to increase output within the framework of a supply agreement, United Arab Emirates Oil Minister Suhail Mohammed Al Mazrouei told reporters in Algiers Monday.

"If all OPEC members are supportive, I think the likelihood of getting something at a larger scale is going to be achieved,” said Mazrouei. “If some of the members are blocking this, not participating, then it’s not going to work."

While there are signs of progress, the most likely outcome to OPEC’s current efforts is more inaction, according to JBC. Algiers may deliver the necessary steps for a future agreement, although that probably won’t happen until the middle of 2017, according to JPMorgan Chase & Co.

"There definitely seems to be a bigger push towards achieving some coordination amongst members this time around, so even if there is no concrete deal in Algeria, this isn’t over yet," said Amrita Sen, chief oil analyst at consultant Energy Aspects Ltd. in London. "The door remains open for further negotiations and a possible deal at the 30 November OPEC meeting in Vienna."