EghtesadOnline: OPEC probably won’t clinch a deal to limit oil production in Algiers next week as members stay focused on either boosting output or defending their market share, according to a Bloomberg survey.

The Organization of Petroleum Exporting Countries, which will hold informal talks with Russia on Sept. 28, faces the same internal rivalries that thwarted a previous agreement in April, according to all but two of 23 analysts surveyed. Iran and Iraq have signaled their resolve to increase output, while group leader Saudi Arabia is maintaining near-record supply, reports Bloomberg.

“OPEC has somewhat become a toothless tiger,” Christoph Eibl, co-founder and chief executive officer of commodity asset manager Tiberius Group, said Tuesday in a Bloomberg Television interview. “The incentives for Saudi, for Iran are all the same: increasing output.”

OPEC Secretary-General Mohammed Barkindo has damped expectations, saying the talks are for consultation rather than decision-making. Yet the planned meeting drove up oil prices last month on speculation members may revive a proposal to freeze production with market rival Russia. President Vladimir Putin said Sept. 2 that producers can overcome the dispute that derailed the April deal, which failed when Saudi Arabia insisted Iran join in.

Iran, which was just starting to restore output after being released from international sanctions, had refused. The chances of an accord are better now as Iran is pumping at pre-sanctions levels, according to Natixis SA.

“There is a great window of opportunity for a freeze here,” said Abhishek Deshpande, chief energy analyst at Natixis, who still considers a deal unlikely. “A more combined effort to freeze oil output at current levels for next year will help provide stability. Iran is unlikely to add extra production anyway.”

Iranian President Hassan Rouhani said Sept. 6 that it’s still “vital” for the country to make up for the output it lost during years of sanctions. That means raising production to “slightly” more than 4 million barrels a day, from 3.8 million currently, before joining discussions on a cap, according to Mohsen Ghamsari, director for international affairs at state-run National Iranian Oil Co.

OPEC may turn its informal meeting in Algiers into a formal session depending on discussions before or during the gathering, Algerian Energy Minister Noureddine Bouterfa said Tuesday on public radio. Producers need to cut global crude supply by 1 million barrels a day to rebalance the market, he said.

His counterpart from the United Arab Emirates set more modest expectations. Producers shouldn’t make a hasty decision and the meeting in Algiers is for consultation, not an official session of OPEC, Energy Minister Suhail Al Mazrouei told reporters in the emirate of Fujairah Wednesday. 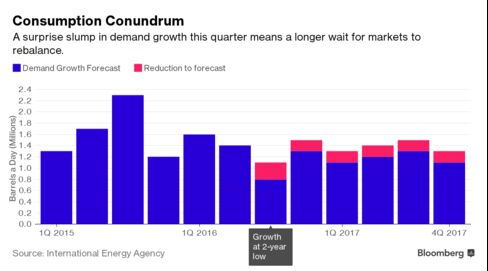 The global oil surplus will last for longer than previously thought, persisting into late 2017 as demand growth slows and output proves resilient, the International Energy Agency said Sept. 13. Just last month, the agency predicted the market would start returning to equilibrium this year.

Oil is still trading at less than half its level in mid-2014. Benchmark Brent for November settlement rose 2.1 percent to $46.86 a barrel on the London-based ICE Futures Europe exchange at 4:35 p.m. local time on Wednesday.

Saudi Energy Minister Khalid Al-Falih, after pledging cooperation with his Russian counterpart Alexander Novak on Sept. 5, denied there was any current need to cap production, saying “markets are trending in the right direction.” The kingdom is reluctant to constrain output as the resulting boost for prices could revive supplies from U.S. shale drillers, according to Hermes Investment Management.

“They’re worried that if they do so, there’ll be production from outside OPEC,” Saker Nusseibeh, CEO at Hermes, said in a Bloomberg Television interview. “They’re playing chicken with the market. They want to see how far they can take it without giving up capacity.”