EghtesadOnline: As most of the world focuses on how unfettered oil production will weigh on prices, a few say a rebound is on the cards as the market starts to reflect a growing risk of shortages.

According to Bloomberg, OPEC’s strategy of keeping its taps open is leaving a smaller cushion if there’s an unexpected need for more oil. The group’s spare capacity has dwindled to the least since 2008, U.S. government data show, while global spending cuts have diminished prospects for new output. Crude may jump more than 35 percent from current levels as the possibility of a supply squeeze begins to get priced in, according to Citigroup Inc. and trader Gunvor Group.

The biggest energy crash in a generation prompted the industry to cut $1 trillion in spending. That’s resulted in less new production and the slowing of current output as firms scrimp on technology that lengthens the life of fields. Citigroup sees prices rising to $65 next year, while Gunvor envisions an advance to as much as $70, levels last seen in 2014.

“The move from $50 to $60 to $70 a barrel could be a lot quicker than people think,” David Fyfe, Gunvor’s head of market research and analysis, said in an interview in Singapore. “Everyone in the supply universe apart from Saudi Arabia is, over the short term, producing as much as they can. There’s no one apart from Saudi Arabia, which has between 1 and 2 million barrels a day of spare capacity.” 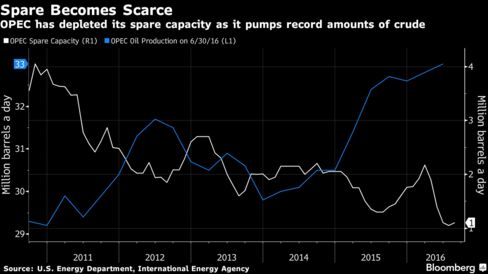 Members of the Organization of Petroleum Exporting Countries had about 1.1 million barrels a day of spare production capacity last month, the U.S. Energy Department estimates, compared with more than 4 million in late 2010.

While producers try to extract what they can from underground, supplies stored on land are ample. Global petroleum stockpiles rose to 3.1 billion barrels in June, about 360 million above the average of the previous five years, according to the International Energy Agency.

A price spike would require demand growth to be strong enough to overwhelm daily supply and eat into those inventories. The IEA on Tuesday said it doesn’t see that happening until at least 2018 as growth in consumption falters and output proves resilient.

Still, while inventories are depressing prices as they remove the fear of scarcity, buyers probably shouldn’t feel so secure, Seth Kleinman, global head of energy strategy for Citigroup, said in an interview in Singapore.

Stockpiles grew as OPEC reduced spare capacity and pumped at record levels. The increase in supply is effectively a transfer of oil stored in reservoirs below OPEC countries to crude stored in tanks above ground, according to Kleinman, who said that the combination of factors could push prices to $65 a barrel next year.

OPEC production rose to a record 33.7 million barrels a day in August as members followed a strategy of maximizing output to force higher-cost producers to cut supply. Both Saudi Arabia, the group’s biggest member, and the United Arab Emirates pumped at record levels last month, while Iran and Iraq are adding output after declines caused by sanctions and violence, respectively.

Russia, the world’s second-largest petroleum producer after the U.S., increased production to more than 11 million barrels a day, according to daily data published on the website of the Energy Ministry’s CDU-TEK unit earlier this month. It’s the first time that level has been reached in records dating back to 1991.

As OPEC pumps more, output outside the group slid to 56.1 million barrels a day in the second quarter, down from 58.3 million at the end of 2014, data from the Paris-based IEA show. Investment in the development of oil and gas resources from 2015 to 2020 will be 22 percent, or $740 billion, lower than anticipated before prices plunged in 2014, with the deepest cuts in the U.S., Wood Mackenzie said in a June report. A further $300 billion will be eliminated from exploration spending.

While U.S. shale production has declined slower than predicted after prices bottomed out, any output increases after prices begin to rise will also take longer than expected, according to Gunvor’s Fyfe.

“The low oil price is doing the work of squeezing out that excess capacity in every link in the supply chain,” Kleinman said. “The problem is that it’s setting us up for a bullish oil market because we’re just not sanctioning any oil projects from down here.”

The spending cuts extend to strategies such as in-fill drilling and enhanced oil recovery techniques that can extend life and slow production declines in older fields. Questions also remain about whether the rush to produce as much oil as possible now might lead to steeper output decreases in the future, said Eirik Waerness, chief economist for Norway’s Statoil SA.

“What is really uncertain is the slightly longer-term impact of all the cost-cutting that is going on now,” Waerness said in an interview in Singapore. “We’ve done everything we can to increase efficiency, drill as efficiently as possible and increase our recovery rates, and you can’t do that for ever.”