EghtesadOnline: The dollar strengthened and government bonds fell as investors awaited a batch of U.S. economic data for clues on the strength of the world’s biggest economy and the trajectory of interest rates before next week’s Federal Reserve meeting.

The greenback strengthened the most against the New Zealand dollar, while the pound was steady before a Bank of England policy meeting. European stocks fluctuated after a five-day run without gains, with energy companies sliding as oil held below $44 a barrel following a two-day slump. Asia’s benchmark share gauge slid for a sixth session as traders awaited central bank meetings in the U.S. and Japan, reports Bloomberg. 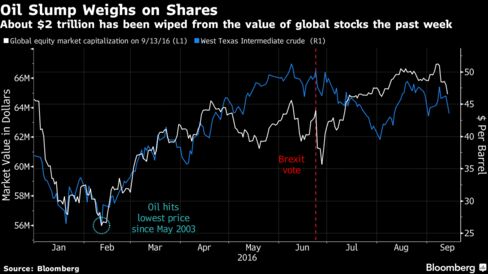 About $2 trillion has been wiped off the value of global equities over the past week as anxiety over the oil market coincided with signs major central banks were preparing to recalibrate monetary policy. While the odds of a U.S. interest-rate hike on Sept. 21 are 20 percent, the probability is 52 percent for a move this year. Prospects may be swayed on Thursday as August data on industrial output, producer prices and retail sales are released. In the U.K., BOE policy makers are forecast to leave the key rate at a record-low. Markets in mainland China, South Korea and Turkey are shut Thursday for holidays.

“Markets are at the mercy of central banks but there’s a bit of a problem regarding credibility,” said Thomas Thygesen, SEB AB’s head of cross-asset strategy in Copenhagen. “Until we get a true picture of where global monetary policy is headed, markets can’t really pick a direction.”

The Bloomberg Dollar Spot Index, a gauge of the greenback against 10 major peers, added 0.1 percent at 10:32 a.m. in London . The New Zealand dollar led declines with a 0.3 percent drop, after second-quarter gross domestic product increased less than economists predicted.

Japan’s yen was little changed at 102.44 per dollar. Morgan Stanley said the Bank of Japan will probably cut the rate on some bank reserves to minus 0.2 percent from minus 0.1 percent at next week’s meeting. Kyodo News reported Wednesday that such a move will be considered by the BOJ, while a Nikkei newspaper article said that the central bank was exploring a deeper foray into negative rates to stoke inflation.

The euro fell 0.1 percent to $1.1242 as a report confirmed that inflation stayed well below the European Central Bank’s goal last month, and as Governing Council member Klaas Knot said the institution’s quantitative easing program will be maintained until the end of 2020 as maturing debt is reinvested.

Britain’s pound was steady at $1.3224 as traders awaited the BOE’s assessment of how the economy has performed since it cut interest rates at the last review on Aug. 4. All economists surveyed by Bloomberg predict the benchmark will be unchanged and the asset-purchase target will be maintained at 435 billion pounds ($574 billion). The currency erased an earlier drop as data showed retail sales fell in August less than economists predicted.

The Stoxx Europe 600 Index added 0.2 percent. Lenders rebounded after their worst three-day drop in two months, with those in Italy, Spain and Portugal leading the advance. The U.K.’s FTSE 100 Index gained 0.3 percent before the BOE decision.

Hennes & Mauritz AB declined 3 percent after the Swedish fashion retailer’s August sales missed estimates because of hot weather. Next Plc dropped 5.3 percent after warning that the current quarter will be its toughest this year and 2017 sales will be hurt by Brexit-induced price increases.

Energy producers were among the worst performers in the index, with Royal Dutch Shell Plc and BP Plc weighing the heaviest, as oil traded below $44 a barrel.

Futures on the S&P 500 Index gained 0.2 percent after the underlying benchmark retreated 0.1 percent on Wednesday.

Hong Kong’s Hang Seng Index added 0.6 percent, trimming its weekly loss to 3.2 percent ahead of a holiday in the city on Friday. A Bloomberg measure tracking Macau casino stocks jumped as much as 5.5 percent amid optimism Chinese Premier Li Keqiang will announce supportive policies during an October visit to the city.

Indonesian and Philippines shares also gained, with the exchange in Manila reversing losses in the final moments of trading to close up 2.2 percent. Indonesian shares gained the most in six weeks after the tax office said it collected 21.3 trillion rupiah ($1.6 billion) in revenue from tax amnesty.

Crude oil traded at $43.70 a barrel following a two-day slide of almost 6 percent. Libya and Nigeria, two OPEC members whose supplies have been crushed by domestic conflicts, are preparing to add hundreds of thousands of barrels to world markets within weeks. U.S. data showed crude stockpiles fell 559,000 barrels last week, compared with a 4 million gain forecast in a Bloomberg survey.

“The market is getting a little more conservative about when the balance will return and prices are adjusting to that,” said Ric Spooner, chief market analyst at CMC Markets in Sydney. “We have moderating demand combined with the possibility of increased supplies from Libya and Nigeria. There is also the potential for non-OPEC output to start increasing.”

Copper held near its highest level in almost four weeks in London. It jumped 2.6 percent on Wednesday -- the most in three months -- after a report showed Chinese lending increased in August by more than economists estimated, brightening the outlook for demand in the world’s top user of industrial metals.

The yield on U.S. Treasuries due in a decade rose one basis point to 1.71 percent, after falling three basis points the previous day. Thirty-year yields increased two basis points to 2.47 percent, leaving the spread between the two securities at 75 basis points, having reached the widest in more than six weeks on Wednesday.

Traders have been favoring shorter-dated notes, which tend to be influenced more by the prospect of policy changes from central banks, on confidence that the Fed will keep interest rates on hold, at least through next week’s policy meeting. Securities with longer due dates have come under pressure after a selloff in Japan’s 30-year debt before next week’s BOJ meeting.