EghtesadOnline: The longer OPEC and other producers talk about a ceiling on crude output, the more doubts grow in the market.

Money managers increased wagers on falling prices by the most in three months as a meeting between Russia and Saudi Arabia ended without specific measures to support prices. Producers have pledged to discuss action in Algiers later this month, reports Bloomberg.

“The more they talk, the less people listen,” said Michael D. Cohen, an analyst at Barclays Plc in New York. “If you look at the actual statements from the Saudis, there’s not a lot of enthusiasm. They’re saying that either they don’t believe a substantial intervention is needed right now or that if other producers want a freeze, they’ll go along.” 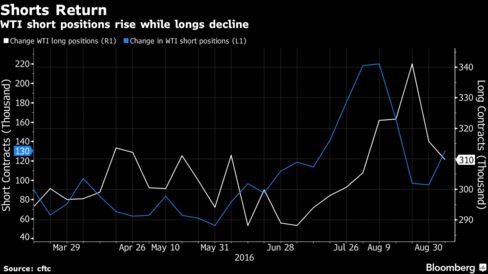 Saudi Arabia’s Energy Minister Khalid Al-Falih said on Sept. 5 that he’s optimistic producers will agree to cooperate in Algiers. He spoke after meeting with his Russian counterpart, Alexander Novak, at the G-20 summit in China. Novak said that a freeze in production by OPEC and Russia would be the most effective way of stabilizing the market.

The International Energy Forum, including 73 countries that account for about 90 percent of the global supply and demand for oil and natural gas, will meet in the Algerian capital Sept. 26-28. The Organization of Petroleum Exporting Countries will hold informal talks on the sidelines of the gathering.

“Everyone is sifting for clues on whether OPEC will reach an agreement to limit production or leave it uncapped with the potential for higher output,” said Tim Evans, an energy analyst at Citi Futures Perspective in New York. “At this point we’re waiting for the outcome of the talks. A lot of people are standing to the side while others are building positions with a specific view in mind.”

A freeze deal between OPEC members and other producers was proposed in February. A meeting in April ended with no accord because Iran refused to join, while Saudi Arabia insisted that its rival take part. Iran has said it’s too soon to cap output as it’s still restoring production curbed by sanctions.

Speculators bolstered their short position in West Texas Intermediate crude by 34,954 futures and options during the week ended Sept. 6, according to the Commodity Futures Trading Commission. Bets on rising prices declined.

Futures surged Sept. 8 after the Energy Information Administration reported U.S. crude inventories fell 14.5 million barrels in the week ended Sept. 2, the biggest drop since January 1999. Prices retreated the next day as speculation grew the supply drop was a one-off caused by a tropical storm that disrupted imports and offshore production.

“There’s a lot of gambling taking place,” said Stephen Schork, president of the Schork Group Inc., a consulting company in Villanova, Pennsylvania. “A lot of money managers are betting that a bottom has been put in but I’m skeptical.”

U.S. crude stockpiles remain at their highest seasonal level in more than 20 years. Refineries plan maintenance programs for September and October when fuel demand is lower. Over the past five years, refiners’ thirst for oil has dropped an average of 1.2 million barrels a day from July to October.

“The market will probably yo-yo in a range through the maintenance season but there’s downside risk,” Schork said. “If demand isn’t a strong as hoped and crude inventories rise, the market could take another leg lower.”