EghtesadOnline: Apple Inc. is challenging it, Ireland’s government doesn’t want it, but bond investors might one day end up benefiting from it.

According to Bloomberg, the European Commission’s ruling last week that the U.S. company must pay Ireland as much as 13 billion euros ($14.5 billion) plus interest is “potentially highly significant” and could help narrow the premium of 10-year Irish bonds over German debt even further, according to David Schnautz, an analyst at Commerzbank AG.

“It’s like having a potential oil field or pot of gold offshore -- what’s the worst that can happen?” Schnautz said. “I don’t see much downside for Ireland and Irish bonds.”

Finance Minister Michael Noonan last week called the judgment an attack on the nation’s 12.5 percent tax rate, the cornerstone of its economic policy, and the government will appeal by the end of November in an attempt to avoid undermining Ireland’s allure for U.S. companies. Others see it as a chance for the country to cut its national debt by almost 10 percent.

Fitch Ratings said on Monday that taking the Apple money would represent a “substantial one-off fiscal windfall for Ireland” and quicken the improvement in the nation’s debt position. It also said the risks of companies fleeing Ireland if the government doesn’t fight the ruling are limited.

“Ireland’s low corporate tax rate, and its high human development and governance indicators should keep the business environment attractive to multinationals, and the costs of relocating would be large,” Fitch said.

While Schnautz said the Irish premium, or spread, over bunds may drop to French of Belgian levels, investors are still waiting to see what happens next. With the support of the European Central Bank’s monthly bond-buying program, 10-year Irish bonds yielded 0.40 percent on Monday, about the same as before the European Union’s executive revealed the scale of the Apple arrears due to the Irish state. 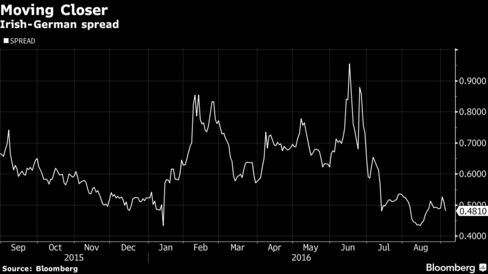 The spread between benchmark Irish bonds and German securities of a similar maturity stood at 47 basis points on Monday compared with 29 points for France and 23 points for Belgium. Ireland will sell 1 billion euros of bonds maturing in 2026 this week.

“Across Europe, individual country risks such as political risk have been overshadowed by the dominant theme of the day, ECB bond buying,” said Ryan McGrath, head of fixed-income strategy at Cantor Fitzgerald LP in Dublin. “The market will wait and see.”

Including interest, the final Apple payment may rise to 17 billion euros. To put that in context, Ireland’s national debt stands at 180 billion euros. The EU also opened the way for other nations to claim a share of the Apple tax, meaning that even if the European courts force the company to pay, Ireland may not be only beneficiary.

“In the best case, Ireland gets a highly significant amount of money,” said Schnautz at Commerzbank. “If not, no harm done.”