According to Bloomberg, the U.S. currency fell against all but one of 31 major peers, with South Korea’s won and South Africa’s rand among the biggest climbers. The Stoxx Europe 600 Index climbed to an eight-month high and the MSCI Asia Pacific Index jumped by the most in eight weeks. The pound rallied after a gauge of U.K. services jumped the most on record. Oil surged above $46 a barrel as a Saudi official said a significant announcement was imminent. Financial markets in Canada, India and the U.S. are shut on Monday for holidays. 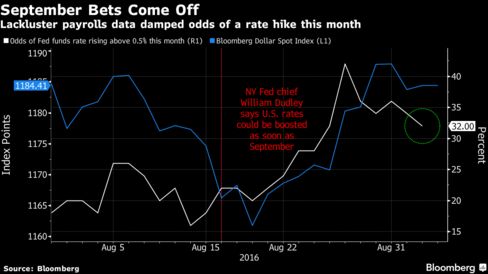 While Friday’s U.S. payrolls data showed hiring moderated more than economists forecast in August, the estimate of the number of jobs added in July was revised higher and financial markets still reflect the potential for a September interest-rate increase. The chance of the Fed hiking this month ended last week at 32 percent, futures show, having been 34 percent on Thursday. The probability fell briefly to 20 percent in the wake of the jobs report.

“The jobs report probably reduces the probability of a Fed hike in September, but it wasn’t so weak that it detracts from the whole concept of an underlying economic recovery, said Daniel Murray, head of research at EFG Asset Management in London. “That’s a completely reasonable backdrop for global equities.”

In the U.K., IHS Markit said its Purchasing Managers Index surged to 52.9 from a seven-year low of 47.4 in July, the biggest monthly gain since the survey began two decades ago. The median estimate of economists in a Bloomberg News survey was for an increase to 50, the level that divides expansion from contraction. China’s services output picked up in August, data showed Monday. Leaders of the Group of 20 nations are attending an annual summit, which is being held in Hangzhou, China.

The Bloomberg Dollar Spot Index, a gauge of the greenback against 10 major peers, fell 0.4 percent as of 9:58 a.m. London time. The measure slid as much as 0.5 percent on Friday following the release of the payrolls data, before erasing its decline as investors weighed the significance of the revised July figures.

“The interpretation of the payrolls data is a bit mixed: It has missed expectations but it’s not terrible,” said Sim Moh Siong, a currency strategist at Bank of Singapore Ltd. “Asian currencies should stay supported because the softer-than-expected payrolls should reduce the chance of a Fed rate hike in September.”

The pound jumped to its strongest level in more than seven weeks versus the dollar as services became the latest part of the economy to show a bounce back after the Britain’s vote to leave the European Union. It rose 0.5 percent to $1.3365, after touching $1.3376, the highest since July 15.

The Stoxx Europe 600 Index rose 0.3 percent. SBM Offshore NV and Tullow Oil Plc advanced at least 3.9 percent as crude climbed. ArcelorMittal and AngloAmerican Plc led miners higher as leaders of the Group of 20 major economies mentioned the global steel glut in their communique at a meeting in China.

SFR Group SA jumped 6.3 percent after Patrick Drahi’s Altice NVagreed to buy the 22 percent of the telecommunications company that it didn’t already own for 2.4 billion euros ($2.7 billion). Altice gained 1.2 percent.

Crude rose 3.9 percent to $46.15 a barrel in New York, after earlier sliding as much as 0.9 percent. Saudi Arabia and Russia agreed to work together to ensure oil market stability even as leaders from the world’s two biggest crude producers stopped short of offering detailed proposals. Saudi Energy Minister Khalid Al-Falih will speak at a news conference at the Shangri-La Hotel in Hangzhou, China, said the minister’s chief of staff, Nabil Al-Jamei.

Gold held near its highest level in more than a week, having rallied 0.9 percent on Friday following the payrolls data.

Australia’s sovereign bonds due in a decade fell, pushing their yield up by four basis points to 1.89 percent. The nation’s central bank is forecast to keep the benchmark interest rate unchanged at Governor Glenn Stevens’s final policy meeting on Tuesday as policy makers hang on the Federal Reserve’s next move.

Japanese long-term bonds fell, with 30-year debt extending to its biggest weekly loss in more than two years, as investors prepared to bid at an auction of the securities on Tuesday. The rout is being driven by speculation the BOJ will reduce its bond-buying program at its next policy meeting now that it owns a third of the nation’s government debt. Governor Haruhiko Kuroda said Monday he doesn’t share the view there’s a limit to monetary easing.

“Unless Governor Kuroda directly rules out scaling back bond purchases, the market will continue to hold that as a possibility,” said Shuichi Ohsaki, the chief rates strategist at Bank of America Corp.’s Merrill Lynch unit in Tokyo. “Selling of longer-dated debt is likely ahead of tomorrow’s 30-year auction.”