EghtesadOnline: As speculation swirls over whether oil producers will reach a deal to coordinate output and aid a recovery in prices, Iran says it’s ready to pump more.

The OPEC member can raise production to 4 million barrels a day in two to three months from the current daily level of about 3.8 million, Mohsen Ghamsari, director of international affairs at state-run National Iranian Oil Co., said in Singapore on Monday. The company faces no technical or operational reasons to restrict or cut output, state news agency Mehr cited Managing Director Ali Kardor as saying. 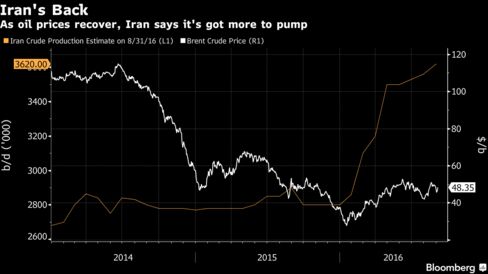 The comments signal that any deal between oil producers inAlgiers later this month may have to accommodate more supplies from Iran. The Persian Gulf state is seeking to regain market share after the removal of international sanctions earlier this year, and its decision not to attend a gathering in Doha in April led to the collapse of a proposal to freeze output then. While Saudi Arabia and Russia on Sunday agreed to work together to ensure market stability, their leaders stopped short of offering detailed proposals, according to Bloomberg.

“The Algiers summit may very well set the stage for the re-emergence of OPEC’s traditional Prisoner’s Dilemma,” said John Driscoll, the chief strategist at JTD Energy Services Pte, who has spent more than 30 years trading crude and petroleum in Singapore. “A general consensus on output levels and higher prices might win nods and endorsements but securing full compliance with sacrifice of national self-interest from both OPEC and non-OPEC producers to achieve collective goals may prove more elusive.”

Iranian Oil Minister Bijan Namdar Zanganeh will make the final decision on whether the country joins any plan by producers to freeze crude output, Kardor said, according to Mehr.

Crude has gained more than 5 percent since the Organization of Petroleum Exporting Countries said in August that it will hold talks in Algiers later this month. Producers have been discussing proposals to limit output after a glut cut prices by more than half from two years earlier. While OPEC adopted a Saudi-led policy allowing members to raise output to protect market share from higher-cost producers in 2014, Iran’s supplies were constrained until this year by international sanctions over its nuclear program.

Brent crude, the benchmark for more than half the world’s oil, was 2.1 percent higher at $47.79 a barrel by 3:52 p.m. Singapore time on the London-based ICE Futures Europe exchange. West Texas Intermediate, the U.S. marker, was up 1.8 percent at $45.23 a barrel.

Iran will support any measures to revive prices “while preserving its national interests” to regain market share, Mehr news agency cited Deputy Oil Minister Amir Hossein Zamaninia as saying on Saturday. The nation can raise its total oil output to 5 million barrels a day in two to three years, NIOC’s Ghamsari said on Monday in Singapore.

Oil-market stability is impossible without Saudi-Russian cooperation, the kingdom’s influential Deputy Crown Prince Mohammed bin Salman said after meeting on Sunday with President Vladimir Putin in Hangzhou, China. Putin told Bloomberg in an interview last week that he’d like his nation and OPEC to reach an output freeze, exempting Iran until it raises production to pre-sanctions levels.