EghtesadOnline: Vladimir Putin said Russia and the U.S. are close to striking a deal on fighting terrorists in Syria, potentially a major step toward ending a civil war that’s flooded Europe with refugees and helped give rise to Islamic State.

“We’re gradually, gradually heading in the right direction,” the Russian president said in an interview Thursday in the Pacific port city of Vladivostok. “I don’t rule out that we’ll be able to agree on something in the near future and present our agreements to the international community.”

Putin, a dogged critic of U.S. foreign policy, had praise for Secretary of State John Kerry, whose “patience and determination’’ in pushing for an accord before President Barack Obama leaves office next year have made a deal possible. Russia and NATO member Turkey, a key backer of some rebels fighting Syrian President Bashar al-Assad, are also aligning their interests in the conflict, Bloomberg quoted him as saying.

The U.S. and Russia are intensifying efforts to find common ground in Syria, where multiple countries and different extremist and rebel groups have been battling each other for 5 1/2 years. Russia entered the conflict last September on behalf of Assad, launching strikes by air and sea in its first military foray outside the former Soviet Union since it collapsed a quarter century ago. Hundreds of thousands have died in the conflict and millions more have fled.

The U.S., which is ultimately seeking Assad’s ouster, has proposed establishing a Joint Implementation Group near Amman, Jordan, in which the U.S. and Russia would coordinate airstrikes against Syrian rebel groups that the two countries agree are terrorists, according to a text of the proposal obtained by the Washington Post.

Over the past few months, Kerry has held repeated meetings with his Russian counterpart Sergei Lavrov and, on occasion, Putin himself. A meeting between Obama and Putin may take place on the sidelines of the Group of 20 summit in China on Sunday and Monday, according to the Kremlin.

A key concern for Russia is that the former al-Qaeda wing Nusra Front -- which recently changed its name to Jabhat Fatah al-Sham -- has in many cases teamed up with moderate rebels the U.S. supports. 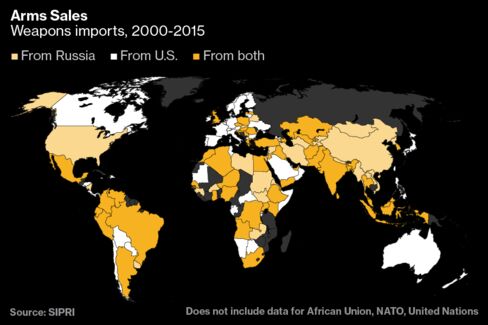 The U.S. argues that Russia’s military campaign is targeting moderate rebels opposed to Assad under the guise of fighting terrorists. Russia says the U.S. is looking to block strikes on terrorist groups out of concern that the rebels it supports would be hit.

“The talks are very difficult,” Putin said. “One of the key problems is that we insist, and our U.S. partners are not opposed to this, that the so-called healthy part of the opposition should be separated from the radical groups and terrorist organizations.”

Asked about Turkey’s large-scale military operation in Syria, aimed at Islamic State and Kurds allied with Turkish separatists who are fighting the terrorist group with U.S. support, Putin said Ankara and Moscow “have a mutual desire to come to an agreement about the region’s problems, including the Syrian one.”

A softening in Turkey’s insistence on Assad’s departure in any settlement of the war has narrowed differences with Russia, whose military intervention bolstered the Syrian leader. Turkey, which mended its ties with Russia after apologizing for downing a Russian warplane near the Syrian border last year, has also reached out to Iran, Assad’s other main backer.

Putin, who will meet with Erdogan at the G-20 summit, said he “valued” the Turkish apology for the plane incident. “We see a clear interest on the part of Turkey’s president in restoring full-scale relations with Russia,” he said.

Putin urged other powers to accept gradual change in Syria rather than pushing for the overthrow of the country’s leader. He cited the examples of Libya and Iraq, where the removal of long-time dictators led to the “collapse of the state” and the spread of terrorism. “Where do you see elements of democracy in Libya?”

“Of course it won’t happen today or tomorrow. Maybe that’s what political wisdom is,” he said.

Russia has been pushing over the past year for a broad anti-terrorist coalition, so far without success. After their latest round of negotiations in Geneva last month, Kerry and Lavrov said they had made significant progress toward renewing a truce in Syria that would allow them to focus on fighting terrorist groups, though there was no breakthrough yet.

Russia and the U.S in February negotiated a cease-fire that subsequently collapsed. Syrian forces backed by Russian warplanes and Iranian militias are now besieging the rebel-held part of Aleppo, once the country’s most populous city and the last major urban center in the hands of the opposition.

With only a few months left of the Obama administration, the window is closing for a deal that can be implemented, according to a Russian official who declined to be named because of the sensitivity of the matter.

Republican presidential contender Donald Trump has said he’d be willing to cooperate with Russia to defeat Islamic State because the U.S. has “bigger problems than Assad.” Democratic Party candidate Hillary Clinton, who’s ahead in the polls, has pledged to establish a no-fly zone in Syria to protect civilians, which could risk clashes between the U.S. and Russian air forces.