EghtesadOnline: Emerging-market assets declined and the dollar strengthened versus most peers after comments from central bankers highlighted the divergence between monetary policy in the U.S. and other parts of the world. European shares were little changed.

According to Bloomberg, MSCI gauges of emerging-market stocks and currencies sank to their lowest levels in at least three weeks after Federal Reserve leaders spurred bets a U.S. interest-rate increase is coming in September. The Bloomberg Dollar Spot Index built on its biggest jump since June, while commodities including crude oil and gold fell. Japan’s Topix index of shares jumped after central bank chief Haruhiko Kuroda reiterated a pledge to boost monetary stimulus if needed. Sovereign bonds fell across most of Europe. 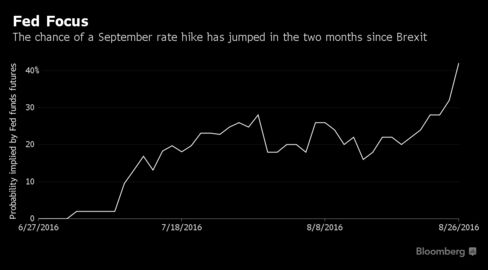 Almost unthinkable two months ago, the prospect of a September rate hike in the U.S. is now firmly on the table with the probability of such a move having jumped to 42 percent from 22 percent in the space of a week. Fed Chair Janet Yellen said Friday at a gathering of central bankers in Jackson Hole, Wyoming, that the case for an increase was getting stronger, while Vice Chairman Stanley Fischer indicated a tightening is possible at the next review. European Central Bank Executive Board member Benoit Coeure said monetary policy may have to be used more frequently to help revive growth in the euro area.

“Friday’s gain in the dollar, driven by Fed Reserve leaders, is expected to be sustained this week,” said Jason Wong, a currency strategist at Bank of New Zealand Ltd. in Wellington. “With most other central banks clearly in the mood to ease, the Fed may still be cautious in its approach to guard against the negative effects of the dollar strength on the global economy.”

Fischer said in an interview with CNBC that Yellen’s Jackson Hole comments left open the possibility of a Fed rate increase next month, noting that the U.S. was “reasonably close to what is thought of as full employment.” The nation’s unemployment rate fell below 5 percent this year for the first time since 2008 and payrolls data on Friday are forecast to show 180,000 jobs were added in August. A report on Monday is expected to show American consumers boosted spending for a fourth month in July.

The MSCI Emerging Markets Index fell 0.8 percent as of 8:16 a.m. London time, with about two stocks declining for every one that rose.

The Stoxx Europe 600 Index was down less than 0.1 percent with financial markets in the U.K. shut Monday for a holiday. Futures on the S&P 500 Index were also little changed after the U.S. benchmark declined 0.2 percent in the last session.

“There will be some mild pressure on markets,” said Michael McCarthy, chief market strategist at CMC Markets in Sydney. “The Fed remains very much data dependent, and that gives you the next hurdle for global markets which is the U.S. non-farm payrolls on Friday.”

Japan’s Topix index climbed 2 percent as Toyota Motor Corp. and Mazda Motor Corp. jumped at least 4 percent. Australia’s S&P/ASX 200 Index slid 0.8 percent as a retreat in the nation’s currencyeroded the case for its central bank to add to this year’s two interest-rate cuts.

The Bloomberg Dollar Spot Index gained 0.2 percent, after surging 0.8 percent on Friday. The yen fell 0.5 percent, after sliding 1.3 percent in the last session, and the euro fell to a two-week low. The pound and the Australian dollar weakened 0.3 percent. 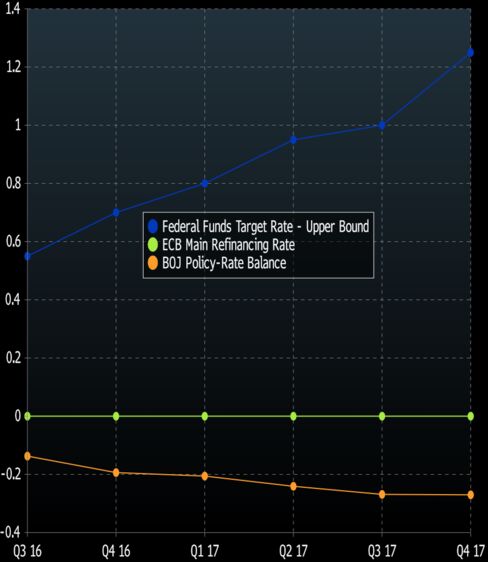 Fed policy is seen diverging further from the ECB and the BOJ, Bloomberg surveys show

The MSCI Emerging Markets Currency Index fell 0.7 percent, led by a 1 percent slide in South Korea’s won. Most of the central banks that are tracked by Bloomberg in both Asia and Europe have cut interest rates this year.

South Africa’s rand weakened 0.4 percent, after a 5.9 percent weekly loss that marked its steepest slide of the year. Concern a tussle between South African Finance Minister Pravin Gordhan and the local police could result in Gordhan’s ouster has weighed on the currency, in turn fueling speculation that the country may have to boost interest rates.

West Texas Intermediate crude slid 1.5 percent to $46.91 a barrel, after rising 1.9 percent over the previous two sessions on speculation informal OPEC talks next month will result in some kind of output freeze. A similar proposal was made in February, but a meeting in April ended with no final accord.

“The likelihood of them actually agreeing to some kind of production freeze is relatively low,” Daniel Hynes, a senior commodity strategist at Australia & New Zealand Banking Group Ltd. in Sydney, said in a Bloomberg television interview.

Germany’s 10-year bond yield rose by three basis points to minus 0.045 percent, while the rate on similar-maturity debt in France increased by the same amount to 0.195 percent.

The yield on U.S. Treasuries due in a decade fell two basis points to 1.61 percent, after jumping six basis points to a two-month high in the last session. The two-year yield was steady at 0.84 percent, having jumped 10 basis points last week. Fed funds futures showed there is a 65 percent chance that Yellen will raise interest rates by year-end.

“Unless we have a blow-up payrolls number on Friday, and strong data between now and the September meeting, she’ll probably go in December,” said John Gorman, head of non-yen rates trading for Asia and the Pacific at Nomura Holdings Inc. in Tokyo. “The short end of the curve is a bit on the dangerous side, because markets are still trying to decide whether the Fed is going to hike in September or December. Which means the two-year notes can sell off quite a lot.”