EghtesadOnline: Emerging-market assets fell with commodities as expectations for a U.S. interest-rate hike grew before a speech this week by Federal Reserve Chair Janet Yellen.

According to Bloomberg, the MSCI gauge of developing nations’ shares dropped the most in three weeks after Fed funds futures ended Tuesday showing a 54 percent chance of a U.S. interest-rate increase by December. South Korea’s won weakened after North Korea conducted a missile test, while South Africa’s currency and bonds declined amid speculation the finance minister will be replaced. Basic-resource stocks fell in Europe as Glencore Plc’s profit tumbled, while oil resumed declines after data showed a buildup in U.S. stockpiles.

“With emerging markets, it’s about the uncertainty over the Federal Reserve," said Stephen Innes, a currency trader at Oanda Asia Pacific Pte in Singapore. "There’s some expectation that interest-rate hikes are going to eventually hit the market.” 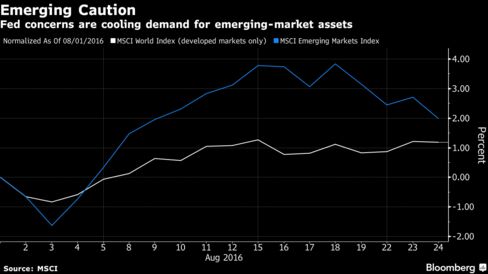 Market sentiment has seesawed in recent weeks as traders look for clues on how aggressive the Fed will be in tightening monetary policy, something Yellen may touch on when she speaks on Friday at a gathering of central bankers in Jackson Hole, Wyoming. At least three Fed officials have made hawkish remarks since the start of last week, though U.S. economic data remain mixed with figures on Tuesday showing a surge in new home sales and a slowdown in manufacturing. A report on Wednesday is forecast to show sales of existing homes held close to a nine-year high.

The Borsa Istanbul 100 Index slid 1.8 percent, the most in a month, as Turkey began its first major offensive in Syria. The military started bombing Islamic State positions in the district of Jarablus in Syria’s Aleppo province Wednesday morning, according to the prime minister’s office.

The Stoxx Europe 600 Index was little changed while Glencore fell 4.9 percent after the commodities trader reported a 66 percent drop in first-half profit. Futures on the S&P 500 Index slipped less than 0.1 percent after the U.S. benchmark ended the last session within 0.2 percent of its all-time high.

West Texas Intermediate crude fell 1.7 percent to $47.30 a barrel in New York after American Petroleum Institute figures showed inventories increased by 4.46 million barrels last week. It rallied 2.2 percent in the last session after Reuters cited unidentified sources in OPEC and the oil industry as saying that Iran is sending “positive signals” it may support joint action to bolster the market.