It’s allowed him to leverage the volatility of the fast-moving oil market in a year in which prices have flipped five times between bear and bull markets as investors weighed how quickly a global supply glut might ease.

“There’s a theme among the younger generation to try to get rich quick," according to Santos. The oil market’s been "like a roller coaster,” he said. “Ultimately, that’s why I’m trading this position. It’s been pretty volatile lately, with these huge swings. It’s kind of fun.”

ETNs, or exchange-traded notes, are similar to exchange traded funds, or ETFs, in that they both trade on exchanges and track an underlying asset. However, while an ETF will usually hold the assets it tracks, an ETN is an unsecured debt note issued by a bank. It allows leveraged exposure and no tracking errors, but also increases risk since it’s linked to the issuing institution’s credit, reports Bloomberg.

Santos isn’t alone in his investment choice. TD Ameritrade lists the Credit Suisse ETN, known by its UWTI ticker, fifth among the top securities traded by those aged 18 to 34, after Apple Inc., Netflix Inc., Facebook Inc. and Walt Disney Co. While the risks with ETNs may be as significant as the gains, Santos, for one, said he is OK with that.

“I’m young,” said Santos, who noted that most of his personal portfolio is in more diversified traditional funds. “I can afford to lose the money.”

More cautious investors, however, probably want to stay better grounded, said David Fabian, managing partner at FMD Capital Management in Irvine, California. These ETNs magnify both gains and losses, and the fact that UWTI resets at the end of the day hinders long-term performance, he said.

Fabian said he advises people not to trade the note and its short counterpart, the VelocityShares Daily 3x Inverse Crude ETN, and doesn’t do so himself. 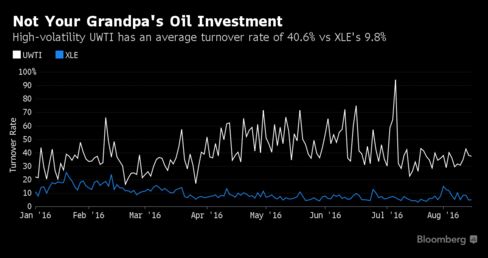 “There’s a lot of juice if you have a short-term tactical outlook and you want to take a risk with some big reward,” said Jason Bloom, director of commodities and alternatives research and strategy at Invesco Advisers Inc, who emphasized that leveraged ETNs are appropriate only for short-term bets and those with a higher risk tolerance. "It certainly provides entertainment."

Credit Suisse writes in its prospectus that the ETNs “may not be suitable for investors who plan to hold them for a period other than one day. They are designed to achieve their stated investment objectives on a daily basis, but their performance over different periods of time can differ significantly from their stated daily objectives.” The company declined to comment further.

Still, ETNs are drawing converts. This year, UWTI attracted an average of $400 million a day in trades. Its turnover rate, the percentage of its $1.2 billion in assets traded each day, is about 40 percent, according to data compiled by Eric Balchunas, a Bloomberg Intelligence analyst. That’s more than four times the rate of State Street Corp.’s broad-based Energy Select Sector SPDR exchange-traded fund and nearly 40 times the popular Vanguard S&P 500 ETF.

Even though Fabian is cautious in his advice on ETNs, he sees the draw in volatile times. “When oil is moving 3 or 4 percent a day, you’re able to magnify that,” he said. “The sharper and quicker the better. That’s where the money’s going to be made.”

Over more than four years, UWTI has fallen 99.5 percent, joining oil tracking notes such as the iPath S&P GSCI Crude Oil Total Return Index ETN, which has dropped 76.3 percent, and the United States Oil Fund LP, which has slipped 70.8 percent in the same period.

West Texas Intermediate, the U.S. benchmark crude, entered a bull market on Aug. 18, less than three weeks after it tumbled into a bear market. Prices slid 64 cents to $47.46 a barrel on the New York Mercantile Exchange at 1:34 p.m. in Hong Kong. WTI has climbed about 28 percent this year.

For Santos, who majored in politics and economics at the University of Toronto, the ETN is not a central part of his portfolio. But it does serve to give him a bit of a rush, he said.