U.S. Risks Losing an Ally and This Jailed Prosecutor Knows Why

EghtesadOnline: If Joe Biden wants to know why so many Turks are infuriated by the hesitant U.S. response to last month’s failed military coup, he could talk to Ilhan Cihaner.

The U.S. vice president visits Ankara this week with anti-Americanism at a peak in Turkey because of what many see as the country’s refusal to hand over their public enemy No. 1: Pennsylvania-based faith leader Fethullah Gulen. Cihaner is a former provincial chief prosecutor whose journey from power to jail and back again has tracked Recep Tayyip Erdogan’s tumultuous relationship with Gulen’s organization, which the Turkish president accuses of trying to topple and even kill him, reports Bloomberg.

“There were times I would ask myself, am I crazy? Am I just obsessed with Gulenists?” said Cihaner, 48, now a legislator with the opposition Republican People’s Party in Turkey’s parliament.

Cihaner said he was sympathetic to U.S. confusion over an organization that Turkey once pressed foreign governments to accept as a modernizing force for Islam but now describes as a terrorist organization. Because Gulen’s followers concealed their beliefs and loyalties to infiltrate the state, proving that they are behind any given action can be frustrating, he said. “Now I think the West is in the same position I was," said Cihaner.

Unfortunately for Biden, few Turks are as understanding of Western confusion as the former prosecutor. That has left the U.S. administration in the invidious position of trying to manage the dispute over Gulen’s extradition, which it doesn’t fully control, with a furious NATO ally that borders Syria, Iraq and Iran. The tension was partly of the U.S.’s own making, diplomats say, as top officials failed to quickly grasp how Turks -- including Erdogan’s domestic opponents -- would respond to the July 15 effort to oust him.

Rather than polarizing the country, as with previous crises where Erdogan has lashed out at alleged "terrorist" plots, last month’s coup attempt has given Turkey’s leader the biggest political boost in years. His approval rating has soared, to 68 percent from less than 50 percent. 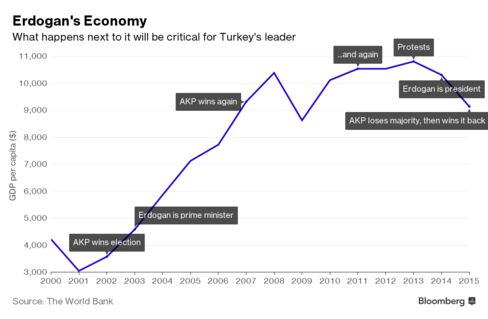 Gulen has strongly denied any role in the coup attempt, though he also said it’s possible some of his followers may have been involved. Few Turks, including Cihaner, take Gulen’s denials seriously and many are astonished that the U.S. should do so, concluding that it must have been working with him.

“If you are a Turk, and you have been brought up on conspiracy theories, what do you see? You see Fethullah Gulen in the U.S.,” said James Jeffrey, a former U.S. ambassador to the country. "We need to up our game very quickly, or we’re going to lose Turkey."

Turkey’s secularists have long despised the Gulen movement, which they saw as a tool in an underhanded effort by Erdogan to change the nature of the state built by Mustafa Kemal Ataturk in 1923. With the coup, however, Gulen and his followers -- active since the 1970s -- have drawn the enmity of fellow religious conservatives, too.

The story of the attempted putsch goes back to when Erdogan and Gulen, both running moderate Islamist organizations, made common cause to wrest control of state institutions -- from the judiciary to the armed forces -- away from the old guard.

Cihaner was chief prosecutor in Turkey’s Eastern region of Erzincan at the time. Shortly after he turned to investigate the Gulenists, he was charged with belonging to an armed terrorist organization working to overthrow the government. His arrest by fellow prosecutor Osman Sanal was captured on film and gripped Turkey at the time because it seemed to expose the struggle for power that was under way.

The alliance between Erdogan and the Gulenists ended in acrimony in 2013. Today, it is Gulenists who are charged with belonging to an armed terrorist organization, with tens of thousands of suspected Gulen followers purged from their jobs in state institutions and schools since the failed coup. Sanal is among the thousands in custody. Cihaner, meanwhile, is free again and on a six-man opposition committee to monitor the latest purges.

It’s all the more confusing because outside Turkey the Gulen movement is known for establishing a global network of schools and interfaith dialog, hardly the stuff of terrorists, said Cihaner. In Turkey, they are ruthless "and completely un-transparent," he said. "They infiltrated most of the state. Ask yourself: Did they take all that power just to teach foreign kids to speak Turkish?”

Asked how he could be sure the Gulen organization carried out the coup, Cihaner said the government only recently gathered the means to destroy the movement.

First, in May, the government officially designated the Gulen movement as an armed terrorist organization, making even membership a crime. Then the government drew up a list of 600 alleged Gulen followers in the military, who were to be purged at the annual promotions board in August, an assertion confirmed by a senior government official.

Ten days before last month’s coup, a new law passed through parliament that would have removed Gulenists from the entire high court system. On July 9, prosecutors in Izmir arrested seven active-duty officers, in connection with a separate alleged Gulenist plot. The noose was clearly closing on Gulen’s Turkish followers, said Cihaner.

"This is an organization with billions of dollars worth of business assets and people in important positions throughout the state sector," he said. "They were losing their power and they were going to lose everything. Gulen could not just sit and watch it happen," said Cihaner.

Worse for Biden as he becomes the highest-level Western leader to visit Turkey since the attempted coup is that many Turks are also convinced by circumstantial evidence that Gulen is in the employ of the U.S.

Dursun Cicek, a former naval officer who spent five years in jail based on fabricated evidence that he wrote an elaborate coup plot, harbors no doubts. Gulenist prosecutors went after him because his job was to root them out of the Navy, said Cicek, 47, who like Cihaner is now an opposition lawmaker. "But it is clear that the U.S. is behind them,” he said.

Asked for evidence, Cicek said there is the way in which Gulen got his green card -- a scenario by now familiar even to Istanbul taxi drivers. Gulen applied in 2006, on grounds that his global network of schools and universities made him "an alien of extraordinary ability." Although the State Department and FBI fought the application in court, Gulen drew letters of support from two retired CIA officials and a former U.S. ambassador to Turkey. Gulen won.

Second, claimed Cicek, trials brought by Gulenist prosecutors in which hundreds of top military officers, including himself, were jailed, were U.S.-inspired. The naval commanders targeted in the case were chosen because they wanted to reduce Turkey’s reliance on the U.S. by reaching out to China, Iran and Russia, and by building their own ships and computer systems, he said.

The third and clinching piece of evidence, said Cicek, is that the U.S. is still "protecting" Gulen.

President Barack Obama has dismissed claims of U.S. complicity in the coup as "completely false, unequivocally false.” An Obama administration official also told reporters on Friday that Turkey hasn’t yet provided formal evidence that Gulen personally was involved in the coup. Extradition from the U.S. is an often lengthy legal process, requiring a federal judge to agree that the Justice Department has persuasive evidence.

Even so, Biden is likely to struggle to persuade Turks of U.S. good faith, so long as Gulen remains in the U.S.

"America has to decide whether to be with a terrorist organization, or with the Turkish nation," said Abdulbari Celik, a 36-year-old businessman from Mardin in eastern Turkey, while visiting the vast mausoleum of Ataturk in Ankara last week. "After 9/11, if Osama Bin Laden had been in Turkey and we had protected him, what would the U.S. have done?”