EghtesadOnline: OPEC and some producers from outside the group may agree to freeze output during informal talks next month, which could prove “self-defeating” because it would benefit other suppliers, according to Goldman Sachs Group Inc.

A deal would show signs of cooperation from Saudi Arabia’s new energy minister after six failed attempts, Goldman analysts including Damien Courvalin said in a report dated Aug. 22. An output cap would likely prove counter productive for the Organization of Petroleum Exporting Countries if it led to further price gains and an increase in supply from other producers, it said. 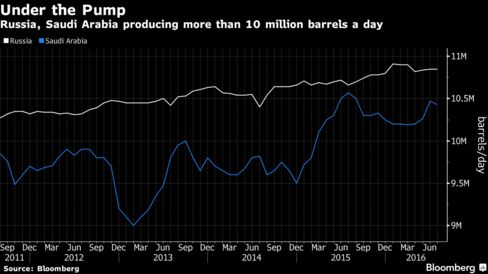 “Thawing relationships between parties in conflict in areas of disrupted production would be more relevant to the oil rebalancing than an OPEC freeze, which would leave production at record highs,” Goldman said. “A production freeze would also likely prove self-defeating if it succeeded in supporting oil prices further, with the U.S. oil rig count up 28 percent since May.”

According to Bloomberg, oil climbed more than 20 percent to enter a bull market Thursday amid speculation talks in September may lead to action to stabilize the market. OPEC is on course to agree to a freeze because its biggest members are pumping flat-out, according to Chakib Khelil, former president of the group. A similar plan was proposed in February, but a meeting in April ended with no accord.

Saudi Arabia and Iran continue to focus on market share and appear unlikely to unilaterally accept a freeze, Goldman said. Supply will remain the driver for oil prices in coming weeks, with no evidence demand growth is weakening, the bank said. Uncertainty about the sustainability of supply gains from Iraq, Libya and Nigeria and the magnitude of these improvements “remain large.”

Goldman maintained its $45 a barrel to $50 a barrel forecast through next summer and reiterated that the price and fundamental recovery remain fragile.

West Texas Intermediate extended losses for a second day on Tuesday, falling as much as 1.7 percent to $46.62 a barrel on the new York Mercantile Exchange, while Brent crude slid as much as 65 cents to $48.51. WTI capped a 16 percent advance over seven sessions on Friday.