EghtesadOnline: The debate over the path for U.S. interest rates heightened as hawkish comments from another Federal Reserve regional chief sent Treasuries and stocks slumping, while spurring dollar gains.

Benchmark 10-year notes halted a two-day rally after San Francisco Fed President John Williams said the central bank’s September meeting is “in play” for a rate hike. The dollar rose against all but one of its major counterparts. The S&P 500 Index slipped after approaching a record high, while Italy’s shares led losses among global equities on concern over the health of the nation’s lenders and a referendum that may lead to the prime minister’s resignation. Oil posted its strongest weekly increase in five months, according to Bloomberg. 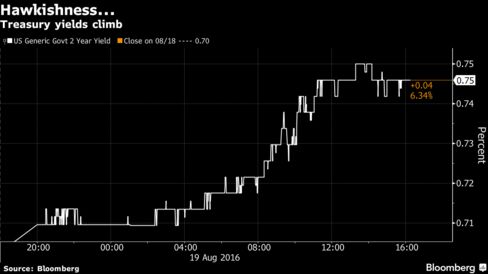 Global markets have been buffeted by comments from regional Fed chiefs pointing toward higher borrowing costs, while minutes of the central bank’s last meeting struck a more dovish tone. Williams’s comments came after a paper he issued earlier this week that called for officials to rethink the way they operate given a fundamental shift in economic conditions. Traders now assign a 24 percent probability to a September rate increase, up from 16 percent last week, according to futures data compiled by Bloomberg.

“My inbox is full today of people returning to the Williams statements,” said Jim Vogel, head of interest-rate strategy at FTN Financial in Memphis, Tennessee. “It appears that people are taking the Fedspeak a little more seriously than they had been.”

Williams, who doesn’t vote on policy this year, is viewed as an important thought leader on the Federal Open Market Committee because he is a prominent researcher who succeeded Chair Janet Yellen as head of the San Francisco regional bank. New York Fed President William Dudley and Atlanta Fed chief Dennis Lockhart jolted markets Tuesday by indicating policy makers might lift borrowing costs as soon as September.

Their comments came ahead of next week’s symposium hosted by the Kansas City Fed in Jackson Hole, Wyoming, where top global central bankers and economic thinkers will gather to discuss how to design resilient monetary policy.

The probability of a U.S. rate increase by year-end climbed to about 51 percent, according to data compiled by Bloomberg based on fed fund futures, from 45 percent on Aug. 15.

Spain’s government bonds are outperforming their Italian peers as the nations’ political fortunes diverge. The yield premium that investors demand for holding Italian 10-year securities instead of similar-maturity Spanish debt has risen to the most in more than 18 months.

Spain moved closer this week toward forming a government after acting Prime Minister Mariano Rajoy made progress in alliance talks with the liberal party Ciudadanos, while Italy is facing increased pressure on its banks and a referendum in the fourth quarter that may cost Premier Matteo Renzi his job.

MSCI’s global index of equities erased its weekly advance as emerging-market shares slumped from the highest level since July 2015.

U.S. stocks slipped for the first time in three days, with a recent rally showing signs of tiring amid elevated valuations and speculation over the potential timing of higher borrowing costs. Optimism that central banks will maintain their efforts to bolster growth, better-than-forecast earnings and continued signs of a strengthening labor market have helped boost valuations to the highest of the seven-year bull market.

“The daily movements are really a function of a fully valued market that’s trading at its highs in a narrow range,” said Ernie Cecilia, chief investment officer at Bryn Mawr Trust Co., which oversees $9.6 billion in Bryn Mawr, Pennsylvania. “The markets are just hanging in there.”

In a broad-based selloff, the Stoxx Europe 600 Index retreated 0.8 percent. A gauge of miners fell the most in a month as commodities sank amid a rebound in the dollar. Italy’s FTSE MIB Index lost 2.2 percent, while Spain’s IBEX 35 Index slid 1.2 percent.

“The Fed has signaled it is unwilling to let tightening expectations fall much further,” Valentin Marinov, head of Group-of-10 foreign-exchange strategy at Credit Agricole SA in London, said in a note. “Against this backdrop, the U.S. dollar sell-off should be coming to an end.”

Brazil’s real posted the only advance among major currencies as the central bank scaled back efforts to weaken the currency.

Oil extended gains after entering a bull market as investors weighed speculation that OPEC talks next month could lead to an output freeze, and U.S. inventories dropped.

Futures rose 0.6 percent in New York. While OPEC is unlikely to reach a deal to freeze production, its plans to hold informal talks in Algiers next month “were the spark” behind oil’s rally, according to Morgan Stanley. U.S. crude inventories dropped the most in five weeks through Aug. 12, while fuel stockpiles slid a third week, Energy Information Administration data showed Wednesday.

"It’s kind of a perfect storm that has rallied this market, but on the other hand it has nothing to do with fundamentals," said Bob Yawger, director of the futures division at Mizuho Securities USA Inc. in New York. "It’s really a short-covering rally that’s been fueled by OPEC rumors."

West Texas Intermediate for September delivery advanced 30 cents to settle at $48.52 a barrel on the New York Mercantile Exchange. The contract gained 9.1 percent this week, the most since March. Total volume traded was in line with the 100-day average.