EghtesadOnline: Even if OPEC strikes a deal with Russia next month in Algiers to freeze oil production, success will mean a lot less than when they tried and failed four months ago.

Oil has rallied more than 10 percent since the Organization of Petroleum Exporting Countries said that it will hold an informal meeting in the Algerian capital, fanning speculation the group could complete a supply agreement with rival producers that sputtered in April. Iran may now drop its refusal to join a freeze after restoring most of the crude output curbed by sanctions, a development analysts say makes a deal more likely, but also less worthwhile, reports Bloomberg.

“A freeze at 34 million barrels a day is not the same as one at 33 million barrels a day,” said David Hufton, chief executive officer of PVM Group in London, referring to the broker’s own estimate for total OPEC output. “It pushes the re-balancing process back at least a year.” 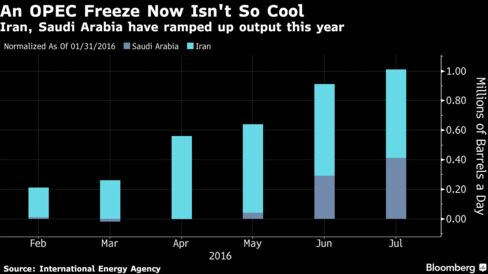 Saudi Arabia and Iran, whose political rivalry thwarted the previous negotiations, are together pumping about 1 million barrels a day more than in January -- the proposed level of the original freeze. That additional crude has prolonged a global oversupply, preventing the market from sliding into deficit this quarter, according to Bloomberg calculations based on International Energy Agency data.

Prices have struggled to go much higher than $50 a barrel. After the longest run of gains since March, Brent crude, the international benchmark, was down 0.5 percent at $50.62 at 2:40 p.m. in London on Friday.

Sixteen nations representing about half the world’s oil output gathered on April 17, but talksbroke down because of Saudi Arabia’s last-minute demand that Iran must also participate. Iran wasn’t at the Doha meeting because it refused to consider any limits on its production, which had only been released from nuclear-related sanctions in January.

Now that major producers including Iran are pumping at or close to capacity, they have little to lose by agreeing to a cap, Chakib Khelil, former OPEC president and Algerian energy minister, said in a Bloomberg television interview Aug. 17.

Iran produced about 600,000 barrels a day more in July than January as it restarted oil fields shuttered during almost four years of sanctions, according to the IEA. Saudi Arabia pumped an extra 410,000 a day, lifting output to a record as it met surging domestic demand and defended its share of global markets, the IEA said. 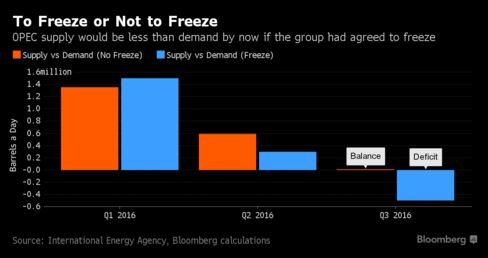 “All the conditions are set for an agreement,” said Khelil, who steered OPEC in 2008, the last time it announced a supply cut. “Russia, Iraq, Iran and Saudi Arabia are reaching their top production level. They have gained all the market share they could gain.”

There are still reasons to think Iran could be reluctant to join a freeze.

The nation will refuse to accept any limits as long as officials insist they can boost outputfurther, said Eugen Weinberg, head of commodities research at Commerzbank AG in Frankfurt. Iran is also trying to attract billions of dollars of investment from international oil companies to expand production capacity, which would conflict with submitting to a cap, said Harry Tchilinguirian, head of commodity markets strategy at BNP Paribas SA.

Iranian Oil Minister Bijan Namdar Zanganeh hasn’t decided yet whether to participate in the talks in Algiers, a spokesman said on Aug. 16.

Other OPEC members who supported an agreement in April may now be less keen, or seek exemptions, because they are suffering output losses, said Olivier Jakob, managing director at Petromatrix GmbH in Zug, Switzerland.

Nigeria’s production is near a 27-year low as militants attack oil pipelines while Venezuela’s output dipped to the lowest since 2003 amid an economic crisis. They may join conflict-hit Libya, who refused to freeze at reduced levels back in April, Jakob said.

Major producers have kept expectations low. Saudi Arabian Energy Minister, Khalid Al-Falih, said only that “there is an opportunity” to discuss “possible action that may be required to stabilize the market,” according to the Saudi Press Agency. Russia sees no need for a freeze at current crude prices, while leaving open the possibility for the future, Energy Minister Alexander Novak said Aug. 8.

Even with a deal, the extra oil OPEC is pumping means it would be less effective than the Doha proposal, said Algeria’s Khelil. Still, the demonstration of unity after a series of inconclusive meetings would improve the “psychology” of the market, he said.

“This time it’s more psychological because they will retain the surplus in the market,” said Khelil. “It would have been better before, but it’s never too late.”