EghtesadOnline: European stocks joined a retreat in emerging markets and oil fell for the first time in a week as investors awaited minutes from the Federal Reserve to better assess whether markets had become too complacent on the prospects for interest rate hikes.

The Stoxx Europe 600 Index fell for a fourth day, while MSCI’s gauge of developing-nation shares also declined, having halted an eight-day winning streak on Tuesday. Crude pulled back from a five-week high as the Bloomberg Dollar Spot Index rebounded from near a three-month low after two regional Fed chiefs indicated interest rates could be increased at least once this year. South Korea’s won tumbled by the most since Britain voted to leave the European Union and gold declined, according to Bloomberg. 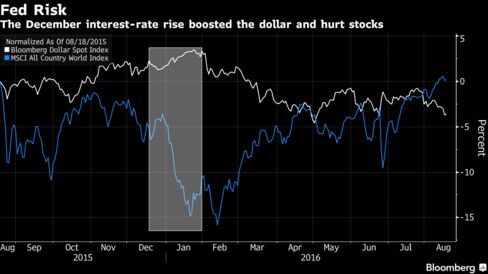 New York Fed President William Dudley and Atlanta Fed chief Dennis Lockhart jolted markets yesterday by indicating a rate hike in 2016 remained possible despite uneven growth in the world’s largest economy. Their comments helped push the probability of a Fed move above 50 percent in the futures market for the first time since June 23, when the U.K. voted to leave the European Union. Before their comments, global equities had climbed to a one-year high and the dollar index sank to levels last seen in May amid conflicting signals over the U.S. labor market and growth.

“A pull-back is following through in European stocks today after the Fed raised the possibility of a September rate hike,” said William Hobbs, the head of investment strategy at the wealth-management unit of Barclays Plc in London. “It seems like expectations had become too muted.”

St. Louis Fed chief James Bullard is due to speak Wednesday and the minutes of the U.S. central bank’s last policy meeting are scheduled for release at 2 p.m. in Washington. Tyco International Plc and Johnson Controls Inc. have shareholder meetings lined up to vote on their proposed $16 billion merger, while Target Corp. and Cisco Systems Inc. are among U.S. companies reporting results.

The Stoxx 600 slipped 0.3 percent at 10:25 a.m. in London, heading for a fourth day without gains. The volume of Stoxx 600 shares traded was 27 percent lower than the 30-day average. S&P 500 Index futures were little changed, after U.S. equities fell on Tuesday.

ASML Holding NV dragged technology shares to the biggest decline on the equity benchmark, dropping 5 percent after Intel Corp. said it won’t use the semiconductor-equipment maker’s lithography technology to make some of its chips. Carlsberg A/S slid 4.6 percent after the Danish brewer reported first-half profit that missed analysts’ estimates as the weakness of Russia’s ruble eroded earnings.

Company shares gave mixed signals on Britain’s vote to quit the EU. Wienerberger AG lost 7.4 percent after the world’s biggest maker of bricks said it’s had to cut production of clay products in the U.K. as demand slowed in the run up to the referendum. Balfour Beatty Plc jumped 7.6 percent after Britain’s biggest builder posted a first-half profit, reinstated its dividend, and said it hasn’t yet experienced any fallout from the Brexit decision.

The MSCI Emerging Markets Index was down 0.9 percent, trimming this quarter’s advance to less than 9 percent. In Hong Kong, small-cap shares were the brightest part of China’s stock markets after an exchange trading link between the city and Shenzhen was unveiled. The Hang Seng Composite Small Cap Index climbed 0.5 percent to four-month high.

The Bloomberg Dollar Spot Index rose 0.4 percent, after sliding 1 percent over the past three days.

“While Dudley was at least able to stem the bleeding for the dollar index, price action is not encouraging for the dollar near term,” said Sean Callow, a senior foreign-exchange strategist at Westpac Banking Corp. in Sydney. “Still, so long as a rate hike seems more likely than not as the Fed’s next move, we wouldn’t get super bearish on the dollar.”

The yen was down 0.5 percent at 100.76 per dollar, after strengthening beyond 100 on Tuesday for only the second time this year. The currency is still up 19 percent for the year and Japanese Vice Finance Minister Masatsugu Asakawa said policy makers are prepared to intervene if exchange-rate moves are extreme.

South Korea’s won slumped 1.5 percent, its steepest slide since June 24. The currency climbed to its strongest level in more than a year last week and its 14-day relative strength index ended the last session below 30, a sign to some investors that a retreat was likely. The MSCI Emerging Markets Currency Index lost 0.6 percent, headed for the biggest drop in seven weeks on a closing basis.

Following the Dudley comments, Fed funds futures implied 51 percent odds for a rate increase by year-end, compared with 42 percent at the end of last week, according to Bloomberg calculations.

The yield on Treasuries due in a decade was little changed at 1.58 percent, after climbing six basis points over the previous two days. A JPMorgan Chase & Co. survey showed Treasury investors held the most net long positions since June 20 in the week ended August 15.

“Benchmark 10-year yields around 1.5 percent show the market isn’t concerned about higher rates, and Dudley doesn’t want that situation,” said Kazuaki Oh’E, the head of fixed income at CIBC World Markets Japan Inc. in Tokyo. “The Fed wants to prepare the market for the next hike.”

West Texas Intermediate crude slipped 0.9 percent to $46.15 a barrel, ending a 12 percent rally over the preceding four days after Saudi Arabia said it is prepared to act to stabilize markets.

U.S. natural gas futures rose 1.1 percent to $2.645 per million British thermal units, a fourth day of gains and the longest rally since the start of June. Temperatures may be above average in the East and Northwest, boosting demand for electricity for cooling.