EghtesadOnline: Oil traded near $46 a barrel after the biggest three-day gain since April as Nigeria’s oil minister signaled the prospect of production cuts from OPEC was unlikely. 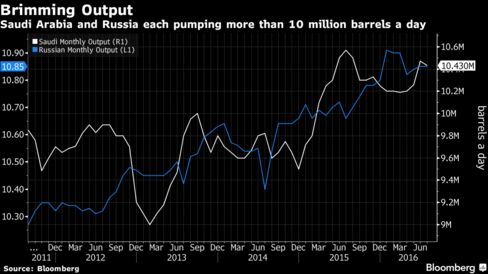 Oil has gained about 16 percent since closing below $40 a barrel and tumbling into a bear market earlier this month. Russia is open to talks to jointly freeze output “if necessary,” according to a newspaper report. A possible deal on capping production between members of the Organization of Petroleum Exporting Countries and non-member producing countries was first flagged in February but deal discussions in April ended with no final accord.

“The OPEC comments have caught the market’s attention, but history would suggest that nothing will happen,” said David Lennox, a resources analyst at Fat Prophets in Sydney. “While falling U.S. supply has helped to narrow the surplus, OPEC hasn’t helped. The group has continued to pump. It’s really only disruptions that have reduced supply.”

West Texas Intermediate for September delivery was 8 cents higher at $45.82 a barrel on the New York Mercantile Exchange as of 8:43 a.m. London time. The contract climbed $1.25 to $45.74 on Monday, capping the biggest three-day gain since April 12. Total volume traded was about 16 percent below the 100-day average.

Brent for October settlement was 11 cents higher at $48.46 a barrel on the London-based ICE Futures Europe exchange. Prices added 2.9 percent to close at $48.35 on Monday, the highest settlement since July 12. The global benchmark crude traded at a $1.95 premium to WTI for October delivery.

Russia sees no signals that Iran will change its position on a production cap and agree to an output freeze, Interfax reported, citing a diplomatic source close to the talks whom the news service didn’t identify. Russian Energy Minister Alexander Novak told Arabic-language newspaper Asharq Al-Awsat that the nation was open to cooperating to stabilize markets after Saudi Arabian Energy Minister Khalid Al-Falih said that talks in Algiers may result in action.

OPEC members will discuss the market when they gather for the International Energy Forum in Algeria next month, according to Mohammed bin Saleh Al-Sada, Qatar’s energy and industry minister and the group’s current president.