EghtesadOnline: World powers urged Russia and Ukraine to refrain from ratcheting up a confrontation over Crimea as President Vladimir Putin bolstered the disputed peninsula’s military with some of his army’s most advanced air-defense missile systems.

The European Union said there was no independent confirmation of claims that Ukrainian agents had killed two Russian servicemen in Crimea. Putin pledged a “very serious” response as he blamed Kiev for pursuing “terror” activities. The 28-member bloc called on both sides to refrain from intensifying what has led to the worst diplomatic standoff between the two countries since a 2015 truce eased hostilities in Ukraine’s separatist conflict. Germany said that Foreign Minister Frank-Walter Steinmeier will meet his Russian counterpart, Sergei Lavrov, next week in Russia.

“We reiterate our condemnation and non-recognition of the illegal annexation of Crimea,” European Commission spokesman Alexandre Polack said in Brussels on Friday. “There has been neither concrete evidence provided by Russia sustaining its claim nor any independent confirmation of the claims made by Russian authorities.”

The confrontation coincides with a surge in violence in Ukraine’s eastern Donbas region, where government troops are fighting rebels who Kiev says are getting cash, weapons and fighters from Russia. The flareup torpedoed plans to revive four-way peace talks at the September Group of 20 meeting in China and raised warnings from analysts of a potential military conflict before Russia’s September parliamentary elections. 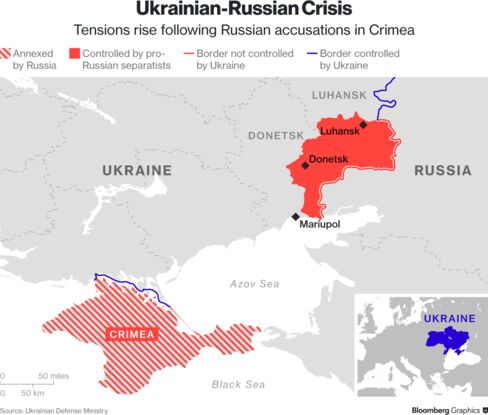 Russia deployed S-400 Triumph air defense systems in Crimea, the Moscow-based RIA Novosti news service reported on Friday. Putin may cut diplomatic ties with Ukraine if there’s no other option left, Prime Minister Dmitry Medvedev said, according to Interfax, another news service. The premier said there was a Ukrainian incursion into the territory, which he called a crime that needs to be investigated.

In a surprise move that raises more questions about Kremlin strategy, Putin dismissed his long-time ally and chief of staff, Sergei Ivanov, on Friday, after a large reshuffle of regional governors and envoys last month before the Sept. 18 elections. The Russian leader discussed bolstering Crimea’s defenses with his Security Council, where Ivanov is a member, on Thursday.

Poroshenko dismissed Russia’s accusations as “fiction” that could be an “excuse for further military threats” against his country. He put the military on alert along the contact line with separatist forces and the frontier with the Black Sea territory, where Ukrainian military officials say Russian troops are reinforcing their positions. 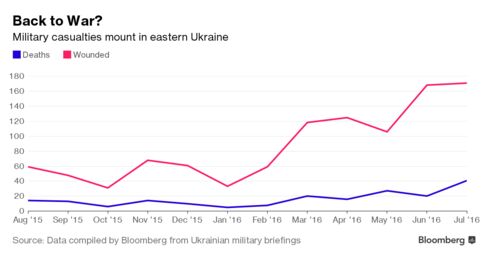 International monitors for the Organization for Security and Cooperation in Europe registered a sharp increase in cease-fire violations in the eastern Luhansk region, which along with Donetsk makes up Donbas. OSCE drones spotted multiple-launch rocket systems in both rebel-held and government-controlled areas, Alexander Hug, deputy chief of the OSCE mission in Ukraine, said in a conference call Friday.

Pro-Russian separatists attacked Ukrainian forces near separatist-held cites of Donetsk and Luhansk and the government-controlled Black Sea port of Mariupol overnight, Ukraine’s military said. One Ukrainian soldier was killed and four were injured, according to spokesman Oleksandr Motuzyanyk.

The U.S., the EU and their allies have refused to recognize Russia’s takeover of Crimea. They have imposed sanctions that have helped force the world’s biggest energy-exporting economy into recession in response to the annexation and the conflict in eastern Ukraine, the latter of which the United Nations estimates has killed almost 10,000 people.

Ukraine’s UN mission called for “urgent” Security Council consultations over Russia’s comments on Thursday. NATO said it was closely monitoring the heightened tensions, and both it and the U.S. said they had seen no evidence corroborating Russia’s allegations.

Putin has exhibited a tendency to use instability in the region as leverage in negotiations. He also has launched military operations while the world’s attention is on the Olympic Games and many leaders are on vacation. The annexation of Crimea came just after Russia hosted the Sochi Olympics, and Russia sent troops into Georgia during the Beijing Olympics in 2008.

“August is the best time for Moscow’s military action because Western decision makers are on holidays,” Anders Aslund, a senior fellow at the Atlantic Council, wrote in a blog post. “The Berlin Wall was initiated in August 1961, the invasion of Czechoslovakia occurred in August 1968, and the Moscow coup took place in August 1991.”