EghtesadOnline: Bonds advanced around the world, spurred by central banks’ commitments to boost growth and a dimming outlook for inflation as commodities declined. The pound fell for a fifth day as the Bank of England resumes debt purchases to combat the fallout from Britain’s Brexit vote.

According to Bloomberg, yields on benchmark 10-year debt touched all-time lows in the U.K and Spain and matched the least in seven years in China. They also dropped in India, following a central bank meeting. Sterling slipped to a four-week low after BOE policy maker Ian McCafferty said more easing is likely to be required, while copper reached its weakest level since July 12. European stocks rose on better-than-estimated results. 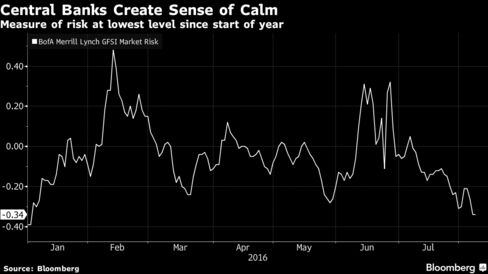 “There is so much demand for U.S. Treasuries that it is difficult for the Fed to raise longer-term rates substantially,” Philip Marey, a strategist at Rabobank International in Utrecht, Netherlands, said, referring to the Federal Reserve. Quantitative easing from central banks elsewhere means “there will be increased scarcity of safe assets, including U.S. Treasuries. This will limit the upside potential in yields.”

The yield on Treasuries due in a decade, the global benchmark, declined two basis points to 1.58 percent at 10:48 a.m. London time. While it jumped nine basis points on Friday after better-than-expected U.S. jobs data, it’s still below the year-to-date average of 1.77 percent.

U.K. 10-year gilt yields dropped to a record low of 0.59 percent and Spain’s reached 0.97 percent, having fallen below 1 percent for the first time on Monday.

Indian bonds advanced and the rupee weakened after Rajan left benchmark interest rates unchanged at his final review. The yield on sovereign notes due January 2026 dropped six basis points, the most since July 28, to 7.12 percent, prices from the RBI’s trading system show.

Chinese bonds advanced as foreign inflows increased and investors sought safety from corporate failures, with a shipbuilderbecoming the latest to renege this week.

The pound sank 0.4 percent to $1.2990, contributing to a five-day loss of 2.7 percent. As well as cutting interest rates for the first time since 2009, the Bank of England on Aug. 4 exceeded economists’ expectations with an announcement that it would increase its gilt-purchase program by 60 billion pounds to 435 billion pounds, starting this week.

“We could see some short-term weakness in the pound,” said Janu Chan, a senior economist at St. George Bank Ltd. in Sydney. “It was an extensive stimulus program that the BOE announced. The economy has been hit in the short-term, and could face a minor recession.”

Taiwan’s dollar gained as much as 0.4 percent to its strongest level in a year after trade data released Monday showed exports increased in July for the first time in 18 months. Global funds boosted their holdings of the island’s shares by about $400 million in the first two trading sessions of this week, according to data compiled by Bloomberg.

The Bloomberg Commodity Index, which measures returns on raw materials, fell 0.3 percent, dragged down by metals.

Copper declined as much as 0.8 percent, falling to the lowest in four weeks, while zinc retreated from a one-year high. Gold slipped 0.1 percent to $1,333.74 an ounce.

Crude was little changed at $43.06 a barrel in New York, after jumping 2.9 percent in the last session as the Organization of Petroleum Exporting Countries predicted the current bear market in the commodity would be short-lived. The group said Monday its members will hold informal talks next month and that there are “constant deliberations” over stabilizing the market.

“Nobody seriously thinks that OPEC will come up with anything that will tighten supply,” said Michael McCarthy, chief strategist at CMC Markets in Sydney. “Having bounced off the support near $40, and without any further supply coming online, we’re moving toward the middle of the trading range of about $44 to $45.”

The Stoxx Europe 600 Index added 0.3 percent. The benchmark has climbed more than 2 percent since the fresh stimulus measures were announced by the Bank of England.

Munich Re rose 3.7 percent after the world’s second-biggest reinsurer reported quarterly net income that was more than double the average analyst projection. Altice rallied 14 percent after its profit increased amid gains in the U.S. and Portugal.

S&P 500 futures were little changed. Investors will look Tuesday to data on wholesale inventories for June for indications of the strength of the world’s biggest economy and the likely trajectory of interest rates. Earnings will also be in focus, with Walt Disney Inc. among companies reporting.