Even Executive Pay Is Being Disrupted at Tech Giants Like Amazon

EghtesadOnline: Amazon.com Inc., Alphabet Inc. and Facebook Inc. have upended the establishments in retailing, advertising and media -- so it may not come as a surprise that their pay plans are unusual too.

According to Bloomberg, the three set themselves apart from other Standard & Poor’s 500 Index companies by paying bosses almost exclusively in stock grants that are free from any links to performance goals. The vast majority of the biggest U.S. companies tie most of their top executives’ pay to targets disclosed in regulatory filings, according to the Bloomberg Pay Index.

Paying in stock rather than cash helps boards align management rewards with performance and tying those grants to specific financial or operational milestones can reinforce that approach. Yet for businesses in hot industries like tech, boards may prefer plans that don’t reveal company targets and that help retain highly sought-after executives by guaranteeing their potential payouts.

“A pay program that isn’t strictly bound to a formula gives the board more latitude to adjust to situations in real time,” said Steven Hall Jr., a consultant at executive compensation advisory firm Steven Hall & Partners. “And how much detail do you really want to disclose in proxy filings and reveal to competitors?” 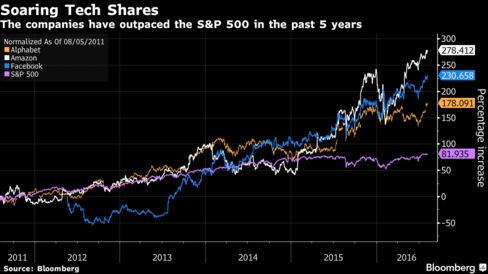 Amazon avoids linking compensation to performance criteria because doing so “could cause employees to focus solely on short-term returns at the expense of long-term growth and innovation,” according to a filing. The company typically grants executives biennial stock awards that vest over six years.

Google parent Alphabet also grants equity every other year, a strategy it has said “encourages executives to take a long-term view.” The payout isn’t contingent on performance objectives and typically happens over several years. Executives have previously been eligible for discretionary annual bonuses based on individual and company achievements. Those were eliminated this year for most participants, a filing shows.

In an industry where ideas are plentiful but talent is scarce, companies are racing to recruit engineers and executives able to upend existing business models with promises of equity-laden pay packages. That’s helped drive compensation at tech’s top echelon to levels rarely seen since the financial services industry before the 2008 crash. Examples include the $199 million grant awarded to Sundar Pichai after he was selected to run Google.

Big run-ups in share prices coupled with founders holding controlling stakes might have given some businesses leeway to use more liberal pay practices without upsetting investors, said David Larcker, a professor of accounting at Stanford Graduate School of Business.

“Talent makes or breaks a company -- that’s true everywhere but it’s especially true here,” Larcker said about the tech industry. “If the view is, ‘This person is going to put us over the top and create multiples of what we’re going to pay him,’ then they’re going to tailor that package to get that person.”

Facebook and Alphabet have latitude in pay decisions because their founders hold controlling stakes in the businesses, ensuring that they always pass advisory say-on-pay elections and secure approval to refill the supply of shares used to pay employees. Amazon founder Jeff Bezos owns a 17 percent stake in the online retailer. All three received more than 90 percent support in their most recent advisory shareholder votes on pay programs.

Shares awarded to Facebook founder Mark Zuckerberg’s four top lieutenants in 2015 made up more than 80 percent of their total pay, compared with an average of 60 percent for S&P 500 CEOs, according to data compiled by Bloomberg. They will be fully vested by 2021 as long as the four remain employed by the company, a filing shows.

The executives are also eligible for annual bonuses based on goals including user-base growth and progress toward long-term investments. Facebook said it anticipates to increase the share of cash compensation to “move closer to market” relative to its peers, without specifying if it’ll be tied to performance.

Vesting periods of at least four years are necessary for companies that rely exclusively on time-based stock awards to “gear individuals toward taking a longer-term view,” said Aalap Shah, managing director at executive pay firm Pearl Meyer. An absence of metrics from pay plans hardly means that executives don’t have goals they must achieve to get paid, he said.

While investors and regulators have pressed companies to be transparent with compensation decisions, granular performance goals can be a window to a management team’s plans. Avoiding that sort of disclosure can be a plus for tech companies that are navigating uncharted territory. International Business Machines Corp. ties Chief Executive Officer Ginni Rometty’s annual bonus and long-term awards to targets it didn’t list in filings because they could “signal IBM’s strategic focus areas.”

Performance-based compensation became popular in the 1990s after a change to the tax code allowed companies to deduct those amounts, a legislative effort to make boards pay bosses only if the company did well. That exemption doesn’t apply to restricted shares not linked to results, even though their value varies with the stock price.

As they mature, tech companies tend to revert to more traditional pay practices. Apple Inc., the world’s largest company by market value, granted CEO Tim Cook a $376 million stock award in 2011, scheduled to vest over the next decade. It was modified in 2013 at Cook’s own request to vest in part based on the company’s stock performance. In 2014, the company added similar conditions to equity awards for other executives as well.