Western Europe’s Top Oil Producer Has a Surprise for Markets

EghtesadOnline: For Norway, the collapse in crude prices has a silver lining: output has exceeded expectations every month for the past two years.

That’s likely to continue as oil companies boost efficiency and pump at full pace amid dwindling revenue, according to the head of Petoro AS, the state-owned oil company that owns more than a quarter of the petroleum output in Western Europe’s biggest producer, according to Bloomberg.

“Improvement efforts and the focus on profitability have led to very high regularity,” Chief Executive Officer Grethe Moen said in a phone interview on Friday from Stavanger, Norway’s oil hub. “There’s no sign this won’t last, at least thus far.” 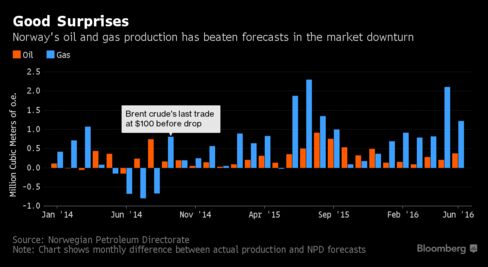 Companies, led by state-controlled Statoil ASA, which operates about 70 percent of the fields, have slashed investments and sought to increase efficiency to combat a rout that has left oil prices 60 percent lower than two years ago. But even as spending on future production dwindles, current output has risen thanks to more efficient operations and past investments that have just started delivering barrels.

Crude production in the Scandinavian nation has exceeded the Norwegian Petroleum Directorate’s forecasts each month since July 2014, while gas output has missed expectations in only three months over that time. The amount of oil pumped in the first six months of 2016 was 2.8 percent higher than expected, the NPD said in July.

If oil production continued to exceed at the same pace for the remainder of the year, it would rise to 91.5 million cubic meters from 90.8 million cubic meters in 2015, Bloomberg calculations based on NPD figures show. That would defy a forecast drop and mean output unexpectedly rose for a second year. It would also be a third consecutive annual increase, after output halved from a peak in 2000 .

While the efficiency improvements in production depend on companies keeping a focus on profitability, they haven’t come at the expense of maintenance work on offshore fields, Petoro’s Moen said. She was echoing comments from Statoil CEO Eldar Saetre, who said late last month that higher output was due to a dramatic reduction in unplanned production losses, higher well productivity and an optimization of maintenance activity.

“Overall, that amounts to strengthened production capacity,” he said. “We’re not pushing any maintenance activity into the future in order to maintain production.”

Higher-than-expected production is balm for the Norwegian government, which is this year being forced to dip into its $880 billion wealth fund for the first time to make up for budget shortfalls. Direct income from its oil and gas fields, the cash it gets from Petoro, fell to a 13-year low in the second quarter. 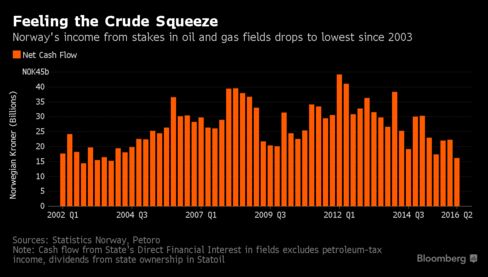 Production increases from Norway and the neighboring U.K. are adding to a global supply glut as Middle Eastern output is climbing to records amid OPEC’s battle to defend market share. The International Energy Agency said last month that while the market balancing is progressing, “the road ahead is far from smooth” as large stockpiles are forecast to keep weighing on oil prices.

For now, it’s hard to know how much of the companies’ cuts are actually lasting improvements, the Petoro CEO said. Savings need to be found in areas where they don’t only hurt the supply companies, which have been put under tremendous pressure to reduce the prices they charge for services and equipment from engineering and drilling to catering and platform construction.

“You also need to talk about real efficiency improvements,” Moen said. “It’s important to have a sustainable supplier industry in Norway, which can both deliver efficient products and develop the new technology that allows us to take the next step forward.”

Referring to the merger of Det Norske Oljeselskap ASA and BP Plc’s Norwegian unit, Moen said it wouldn’t be “unnatural” that the market downturn also led to a change in the industry structure through more transactions.

“What’s important to us is that we have a diversity of companies that have the ability to implement projects,” she said.