Insuring Against a Market Selloff Just Keeps Getting Cheaper

EghtesadOnline: In a world of overpriced assets there's one thing that keeps going on sale: volatility.

According to Bloomberg, the cost of protecting against a fall in the S&P 500 has dipped to a one-year low, according to equity derivatives strategists at Credit Suisse Group AG. It couldn't be better timing given that analysts at Goldman Sachs Group Inc. are sounding the alarm bell of a drop in stocks over the next three months, laying out a laundry list of investor worries, including stretched valuations, that could knock the recent rally. 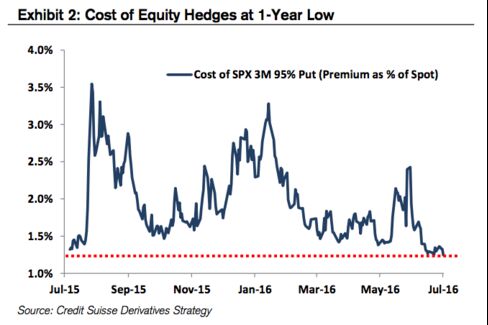 The seemingly contradictory combination of somnambulant markets in the face of a raft of headline-grabbing events has encouraged some investors to bet on a return in volatility, with exchange-traded products (ETPs) tied to the asset class seeing billions of dollars worth of inflows in recent months.

But going long volatility has generally proved unprofitable in recent years as the easy monetary policies of central banks have kept a lid on jittery market movements. The much-watched Chicago Board Option Exchange's Volatility Index, better known as the VIX, is currently languishing at 12.6 — far below its five-year average of 17.30 — despite a host of risk events that ostensibly could have spooked investors. Even when the VIX has risen, investors who put money to work in ETFs tied to VIX futures have seen disappointing returns because of the crippling cost of rollingvolatility futures.

The relative cheapness of volatility insurance in the face of macro risks suggests that sellers are in plentiful supply despite the risks that come with such a strategy. Selling 'vol,' usually through the use of derivatives, has often been likened to picking up pennies in front of a stream roller as those betting against big market moves may make a small but steady stream of money before being wiped out by an unexpected event.

Still, the population of willing volatility sellers has expanded, according to market participants. Companies seeking to repurchase their shares are said to have been selling puts and calls on their own stock to facilitate buybacks of their shares. Meanwhile the prospect of generating outperformance in a world of pervasively low returns and high correlations has encouraged investors to sell volatility as a way of boosting yields with a much wider range of investors now in on the act across a wider range of assets.

Systematically selling volatility on products linked to the performance of corporate debt, for instance, "can be very profitable," Citigroup Inc. strategists wrote in research published last week. They urged their clients to "sell volatility, but in a smart way" as a way of creating outperformance known as 'alpha.'

The preponderance of investors willing to sell volatility protection on the cheap suggests a market that could be caught off guard in the event of a major sell-off, argues Peter Tchir, head of macro strategy at Brean Capital LLC. In such a scenario, cut-price volatility protection could quickly be elevated from the bargain basement.

"Basically people who sold vol — in all its various forms — have done well and are likely getting more capital and more power. Those who didn’t embrace the central banks and selling vol  — in all its various forms — are likely to have seen their capital and influence diminish," he said. "I cannot tell when this strategy will backfire, but we seem to be closer to a tipping point when everyone 'knows' vol will be low given central banks eagerness to help."