EghtesadOnline: If Mario Draghi intends to avoid a year of cross-talk about rising inflation among his European Central Bank colleagues, he might want to do some jawboning of his own.

Accelerating consumer prices have triggered a fit of murmuring, particularly in Germany, about the need to discuss tightening monetary policy soon. Draghi could choose to skirt those conversations until inflation shows the “durable” shift he’s looking for, or start the ball rolling toward a consensus on what an exit will look like, whenever it happens, Bloomberg reported.

It “makes a lot of sense to discuss the exit strategy in the early stages,” said Frederik Ducrozet, senior economist at Banque Pictet & Cie SA in Geneva. “There’s a lot of noise with inflation approaching 2 percent in Germany, which is understandable for a central bank whose mandate is indeed defined on the basis of headline inflation including energy and food prices.”

In the euro area’s current political atmosphere, with anti-integration parties gaining ground in a year of multiple elections, a single central bank whose policies are invariably out of whack for any individual country is an irresistible target for vote-hunters. That makes the path forward for the ECB as much diplomatic as technocratic.

Draghi is due to speak publicly twice next week, in Frankfurt and Ljubljana, though neither event is specifically focused on monetary policy.

At his last press conference on Jan. 19, the ECB president rebuffed questions on how and when the ECB would wind down its 2.28 trillion-euro ($2.4 trillion) quantitative-easing program. The plan to reduce monthly purchases to 60 billion euros from 80 billion euros from April does not, he said, imply a ‘taper’ toward zero.

“We will have to have a very deep and very careful discussion and analysis of the situation,” he said. “But we are not there.”

Economists’ views reflect the absence of much in the way of guidance. Anatoli Annenkov at Societe Generale SA in London thinks QE could be further slowed this year and stopped completely in early 2018. Others, like David Mackie at JPMorgan Chase & Co., see tapering starting only after that point.

Inside the ECB’s Governing Council, the tradition of setting policy by consensus appears to be going through one of its difficult phases. Executive Board member Sabine Lautenschlaeger and Bundesbank President Jens Weidmann, both German and both openly skeptical of QE, signaled this week that the time to discuss winding down the program is near.

German consumer prices rose an annual 1.7 percent in December and the Bundesbank says the January figure -- due on Monday -- could top 2 percent. Figures on Friday showed import prices climbed last month at the fastest pace in almost five years. 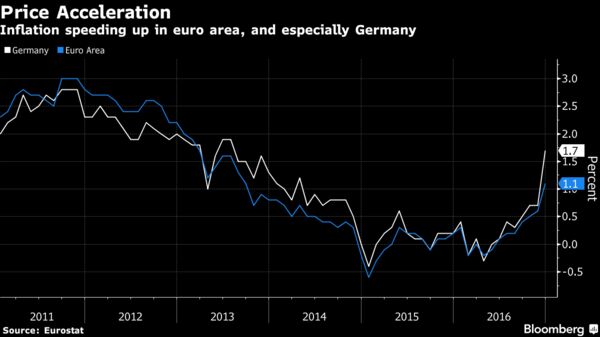 The euro area’s inflation rate is also picking up rapidly but, as in Germany, it’s driven largely by higher energy costs. And at just 1.1 percent, it’s still well below the goal of just under 2 percent.

That matters. Most of the Governing Council still lean toward avoiding any suggestion of removing stimulus, given that parts of the region still have as much as a fifth of the workforce standing idle. Spanish Prime Minister Mariano Rajoy made that point this week.

“There are some things that worry me, such as Brexit, what could happen in the U.S., the oil price, and what the ECB could do,” he said in an interview with Onda Cero radio on Thursday. “So far it is acting correctly.”

Draghi identified four features on Jan. 19 that give clues to what he thinks would justify withdrawing stimulus. Inflation has to be viewed over the medium term; it must be durable; it has to be defined for the euro area as a whole; and it has to survive the end of QE and negative rates.

Those are hard to measure though. In the meantime, the fissures on the Governing Council -- alluded to by the French central-bank governor -- may keep widening.

“Some seem to fear a resurgence of inflation; this is very exaggerated,” Francois Villeroy de Galhau said in Munich. “Contrary to what some critics suggest, our monetary policy is not some sort of Latin fantasy.”