European stocks are at the mercy of a slowdown in positive macro surprises, according to analysts at the German bank.

EghtesadOnline: Brace yourself. A slowdown in positive economic surprises may set the stage for a pullback in European equities in the coming months, warn analysts at Deutsche Bank AG, citing the close relationship between global stock-market performance and better-than-expected data across major economies since November 2016.

Firming economic data around the globe explains about 71 percent of the worldwide rally in equities, according to an analysis by the German bank. That means the unexpectedly strong economic indicators over the past six months — which have helped European cyclical stocks stage their sharpest rally since 2009 — may be paving the way for a correction, according to Bloomberg.

"Global macro surprises have only been higher 5 percent of the time since 2003 (when the data series starts)," European equity analysts, led by Sebastian Raedler, wrote in a note on Thursday. They typically falter at these elevated levels, he said, "and have shown first signs of softening over the past week."

Raedler and co. forecast the Euro Stoxx 600 will close 2017 at 375, implying a 2.2 percent upside from current levels, but reckon investors can snap up European stocks at more attractive levels as the boost from macro surprises diminishes mid-year. 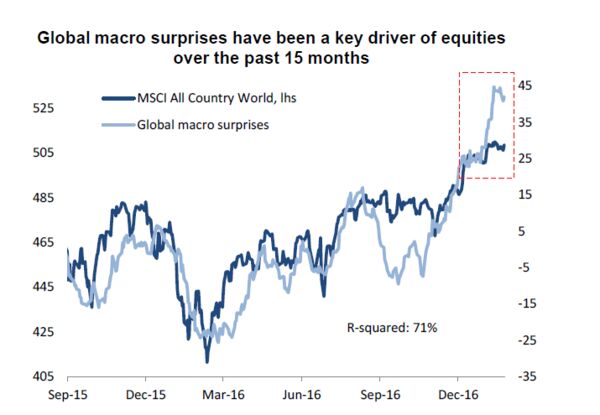 Macroeconomic surprises are now at their highest level since May 2010, according to a Deutsche Bank index. The more-widely used Citigroup Surprise Indexes also highlight the surge in better-than-expected data posted over the past year, with all four of the world's biggest economies in positive territory. Since November, only Japan has dipped below the line. 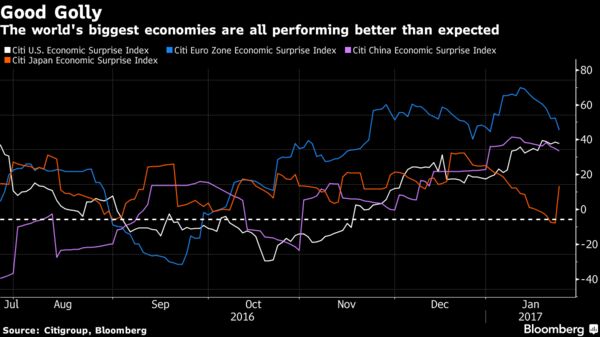 Accordingly, global stocks have been on a tear over the past six months as easier financial conditions have helped to power a surge in manufacturing output, combined with expectations for higher growth in the U.S. since the election. The Euro Stoxx 600 has notched a 9 percent gain since the November poll, while the S&P 500 Index surged to a record on Wednesday and the Dow Jones Industrial Average jumped past the 20,000 threshold.

Investors are paying greater to attention to economic surprise indexes, which measure the results of economic releases relative to analysts' expectations of them, and tend to be mean-reverting in nature given the propensity of economists to price-in conditions once they transpire.

The indexes have also garnered market attention for their correlation with company earnings. Analysts at Morgan Stanley wrote in a report last week that better-than-expected economic data in recent months should be a boon for European stocks this month, as fourth-quarter earnings season kicks off. 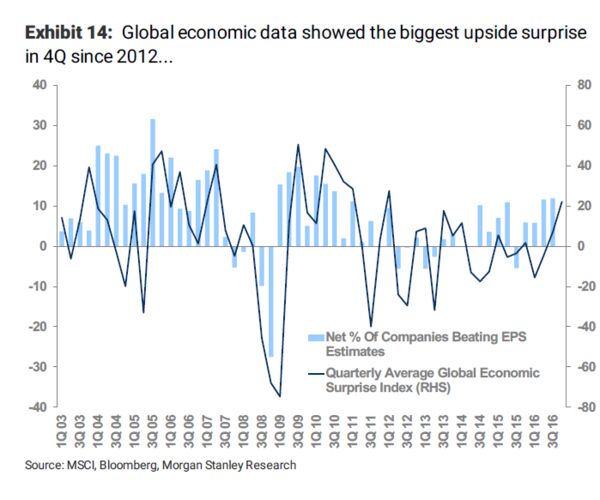 The counterpoint comes from Mark Tinker, head of AXA Framlington Asia, who is skeptical of the attention lavished on surprise indexes by investors, citing the lagging nature of economic data and the disproportionate weight attached to initial releases relative to revisions. "The market will herd in one direction on the back of data surprises, offering an opportunity to trade in the other direction," he wrote in a client note last week. "We don’t need to predict the move, just wait for the ‘new data’ to be priced in, then move the other way."