EghtesadOnline: The dollar fell for a fourth day as U.S. Treasury Secretary nominee Steven Mnuchin said a strong currency could hurt the economy. The yen fluctuated after the biggest jump since July and Asian stocks were mixed as investors assessed the impact from Donald Trump’s efforts to rework U.S. trade pacts.

The dollar traded at the lowest level since early December. The Japanese currency was little changed, erasing an early decline, while the MSCI Asia Pacific Index swung between gains and losses. Equities in Tokyo fell while Hong Kong and Australian shares climbed. Gold was steady after touching the highest since November and 10-year Australian yields fell a second day, according to Bloomberg.

While investors have been looking for details on campaign promises to boost growth and government spending, much of the incoming administration’s initial pronouncements targeted trade or pushed companies to invest more inside the U.S. President Trump promised a “very major” border tax and signed an executive order to withdraw the U.S. from the Trans-Pacific Partnership deal. 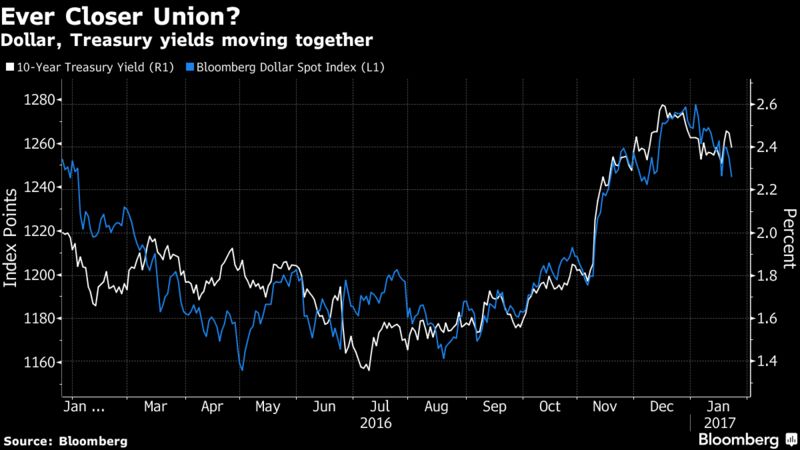 “The first couple of days of the new presidency have seen the rhetoric weighted toward protectionist policies while little detail is yet available on stimulus measures,” said Ric Spooner, Sydney-based chief analyst at CMC Markets Asia Ltd.

Trump’s pro-growth campaign-trail pronouncements helped drive a rally in equities after his November election victory, while the dollar surged. Those trades are largely unwinding this month as investors assess whether the moves had pushed prices too far, too fast. Meanwhile, money managers are turning their focus to earnings from some of the world’s largest companies, with Alphabet Inc. and Alibaba Group Holding Ltd. among those reporting results this week.