EghtesadOnline: Oil advanced to trade near $53 a barrel as Iraq said it’s close to implementing its share of pledged output curbs agreed with OPEC to trim bloated global inventories and stabilize the market.

Futures rose as much as 0.6 percent in New York after dropping 0.9 percent on Monday. Iraq, the second-biggest OPEC producer, has reduced supply by 180,000 barrels a day and will cut a further 30,000 a day by the end of the month, Oil Minister Jabbar Al-Luaibi said in an interview. In the U.S., crude inventories probably expanded for a third straight week, according to a Bloomberg survey before government data Wednesday, according to Bloomberg. 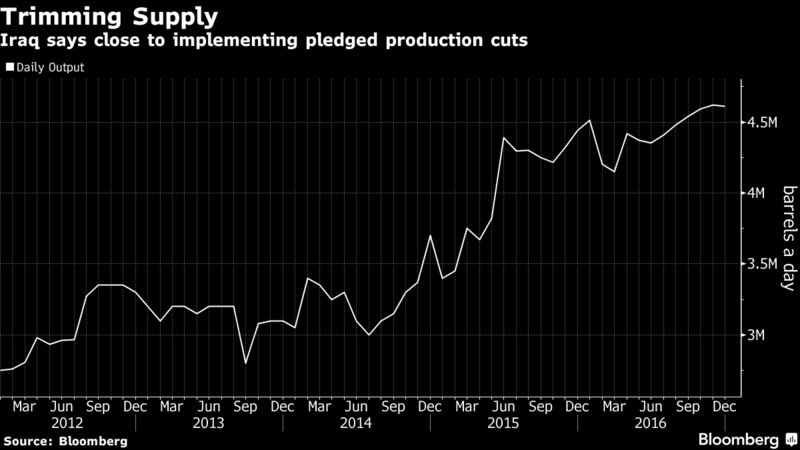 Oil has held above $50 a barrel since the Organization of Petroleum Exporting Countries and 11 other nations agreed late last year to curb supply by about 1.8 million barrels a day. While Saudi Arabia says more than 80 percent of the targeted reduction has been implemented since the deal took effect Jan. 1, the International Energy Agency predicts a rebound in shale output as prices rise. U.S. drillers last week added the most active rigs since 2013.

“The market is waiting to see how the OPEC cuts and U.S. supply situation plays out,” said Jonathan Barratt, chief investment officer at Ayers Alliance Securities in Sydney. “There’s a focus on producers and whether they are complying with their pledged cuts, but it’s a waiting game at the moment.”

West Texas Intermediate for March delivery gained as much as 29 cents to $53.04 a barrel on the New York Mercantile Exchange and was at $53.01 at 11:34 a.m. in Hong Kong. Total volume traded was about 56 percent below the 100-day average. The contract fell 47 cents to $52.75 on Monday. Front-month prices have averaged about $52 a barrel since the start of December.

Brent for March settlement added as much as 33 cents, or 0.6 percent, to $55.56 a barrel on the London-based ICE Futures Europe exchange. The grade dropped 26 cents to $55.23 on Monday. The global benchmark crude traded at a premium of $2.51 to WTI.

While 90 percent of Iraq’s output cuts have come from fields operated by companies run by the federal government, Baghdad is also coordinating reductions with the semi-autonomous region of Kurdistan and international oil companies, Al-Luaibi said in London. It’s too early to say if the cuts could be extended beyond the initially agreed six-month term, he said.