EghtesadOnline: The flight to haven assets eased following the biggest drop in the dollar since July with moves in the yen, Treasuries and gold steadying ahead of Donald Trump’s inauguration. Hong Kong shares rallied with emerging-markets assets.

Gold and the yen fell for the first time in eight days. Chinese equities gained amid speculation of state efforts to ensure market stability during President Xi Jinping’s appearance at the World Economic Forum in Davos. Hong Kong’s Hang Seng continued its run to the highest level since the start of November. Tokyo shares sank with those in Sydney and Taipei, following losses on the S&P 500 index, while stocks in Jakarta and Manila rose, Bloomberg reported.

Politics have impacted heavily on global markets in 2017 with traders assessing the significance of Trump’s comments that the dollar is too strong ahead of his inauguration on Friday. The U.S. currency rose after Federal Reserve San Francisco President John Williams said the U.S. economy has reached its maximum employment goal and gradual interest rate increases will likely be appropriate. Meanwhile, trading firms are reaping the rewards from stronger currencies and bond-trading in the wake of the U.S. election, with Morgan Stanley saying momentum from a strong fourth quarter continued into the first weeks of 2017. 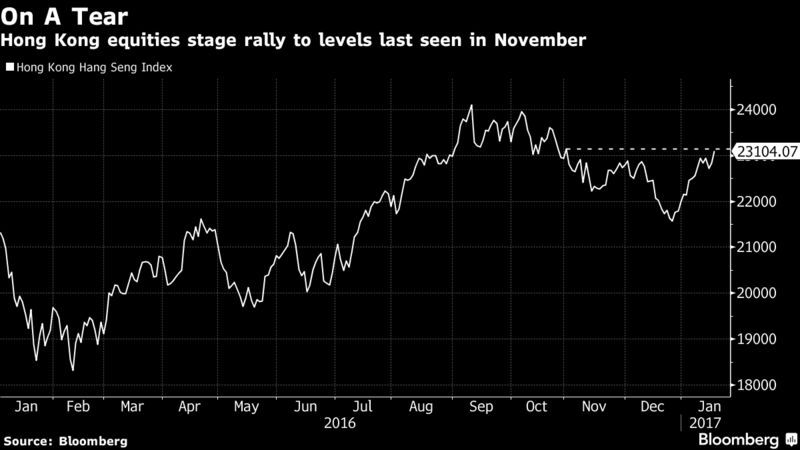 “Trump has made a lot of announcements but people are waiting for that to translate into implementation and some policy around that,” Paul Harris, a Toronto-based fund manager at Avenue Investment Management, told Bloomberg TV. “This is the time when you might have some slight volatility.”

The Chicago Board Options Exchange Volatility Index rose 5.7 percent on Tuesday to the highest level of this year. A similar gauge for the Nikkei Stock Average slipped 0.2 percent on Wednesday after jumping 15 percent over the previous two days.

Here are the main moves in markets.