EghtesadOnline: The new year has been kind to gold. Prices have advanced every day apart from a single session this month on a reappraisal of political and economic risks as the U.K. gets to grips with the Brexit process and investors await Donald Trump’s inauguration. 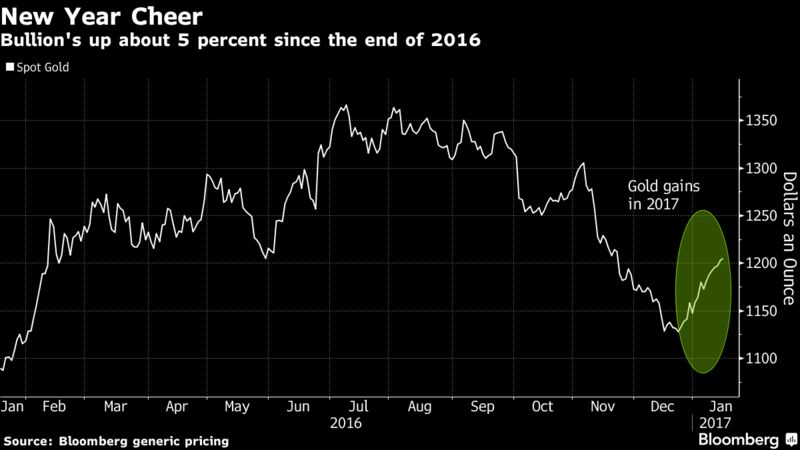 Gold has rallied about 5 percent this year as investors moved toward safer assets amid concern over Trump’s policies and the U.K.’s impending break from the European Union. Prime Minister Theresa May is due to deliver a major speech on Tuesday in which she may say that the U.K. is likely to pull out of the single market for goods and services and seek a completely new trading relationship with the bloc. Trump will be sworn in as U.S. president on Friday.

“There is a lot of uncertainty in the market,” Brian Lan, managing director of Singapore-based GoldSilver Central Pte, said by phone. “Gold is a good safe haven, especially in these types of periods of uncertainty, especially political uncertainty.”

Bullion’s advance has been buttressed by a pause in the dollar’s rally, as well as signs of increased demand. The Bloomberg Dollar Spot Index, which tracks the greenback against 10 peers, fell 0.2 percent on Tuesday, and has lost about 0.7 percent since the end of 2016. Holdings in exchange-traded funds backed rose 2.5 metric tons on Friday, the biggest jump since Nov. 9.

Shares of mining companies have traded higher in 2017 as bullion advanced. In Australia, Newcrest Mining Ltd., the country’s largest producer, rose as much as 2 percent on Tuesday to the highest since Nov. 11, while Evolution Mining Ltd. surged as much as 4.1 percent.