EghtesadOnline: Donald Trump’s first press conference as president-elect spurred a brief bout of volatility on U.S. financial markets before stocks, the dollar and Treasuries drifted back toward pre-event levels with investors still awaiting details on the Republican’s policy prescriptions.

Treasuries rallied, the dollar tumbled more than 1 percent from its high and U.S. stocks erased gains as Trump took the podium around 11:15 a.m. in New York. Health-care shares led equity losses on comments that he’d force the industry to bid for government business, while Mexico’s peso headed for a fresh low as Trump didn’t soften his stance on America’s business relations there. Haven assets advanced, according to Bloomberg.

While Trump addressed issues from Russian hacking allegation to drug prices and the fate of his family business, there was a dearth of details on the timing and scope of planned policies from infrastructure spending to trade pacts that will determine the direction for financial markets in 2017.

Once the president-elect concluded his remarks, stocks staged an afternoon comeback to close 0.1 percent below an all-time high, ending virtually unchanged from the level when Trump began speaking. A rally in crude helped, as oil and gas producers surged after oil jumped almost 3 percent. The dollar recovered much of its losses to finish little changed along with Treasuries. 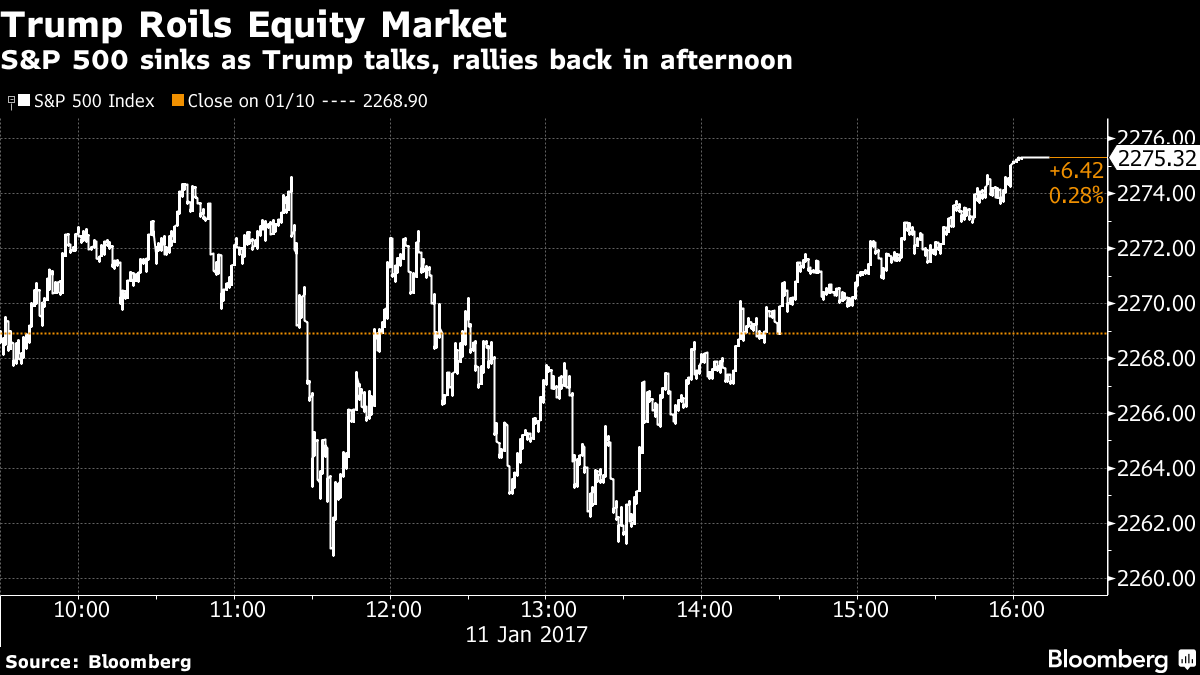 “The market didn’t get what it wanted –- details on stimulus to be provided,” said Bipan Rai, senior foreign-exchange and macro strategist at Canadian Imperial Bank of Commerce. “For now, today’s pre-Trump trades are being unwound.”

The dollar and stocks have been stuck in a monthlong rut since the Federal Reserve’s rate decision after speculation Trump will pursue a pro-growth agenda unencumbered by backlash from any protectionist moves sparked rallies that drove American equities to records and the dollar to a 14-year high.

“The market has been questioning this Trump trade,” said Priya Misra, the head of global rate strategy at TD Securities. “We were looking for specific details on tax reforms and other pro-growth ideas that people have been pricing in since the election. The burden of proof is on the policies, and we haven’t seen any of that. The big Trump trade is on pause, stuck at this ’show-me-the proof’ type of level.”

Donald Trump Dollar US Treasuries US stocks US financial markets