Oil Tumbles Most in Five Weeks Amid Iraqi Compliance Concerns

EghtesadOnline: Oil dropped the most in more than five weeks in New York amid concern about Iraqi compliance with OPEC production cuts.

Oil last year posted its biggest annual gain since 2009 as the Organization of Petroleum Exporting Countries and 11 other countries agreed to curb output starting Jan. 1 to trim a global glut. While Gulf producers say they’ve started to reduce supply, increases from exporters such as Libya, which is exempt from cuts, could put pressure on prices.

"The Iraqi headlines have raised concerns about compliance," John Kilduff, a partner at Again Capital LLC, a New York-based hedge fund that focuses on energy, said by phone. "We need to see compliance outside of Saudi Arabia, Kuwait and the other Gulf states."

West Texas Intermediate for February delivery fell $2.03 to $51.96 a barrel on the New York Mercantile Exchange, the biggest drop since Nov. 29. Brent for March settlement dropped $1.69, or 3.8 percent, to $54.94 a barrel on the London-based ICE Futures Europe exchange. The global benchmark crude closed at a $2.07 premium to March WTI.

Iraq’s production climbed in 2016 and it was initially reluctant to join the cuts, asking first for an exemption to help it fight Islamic State militants and then disputing OPEC’s baseline production data. Energy Aspects Ltd. doesn’t expect Iraq to comply with its output quota, the London-based consultant said last week in a note.

The output cuts already announced comprise between 60 and 70 percent of the total decrease pledged by OPEC and other producers, Kuwaiti Oil Minister Essam Al-Marzouk said to reporters at a joint news conference with OPEC Secretary General Mohammad Barkindo in Kuwait City.

"The rising flows from Iraq may be the first sign of a crack in OPEC compliance," Bob Yawger, director of the futures division at Mizuho Securities USA Inc. in New York, said in a telephone interview. "Compliance from the Gulf states is looking pretty good but there are a lot of questions about whether Iraq will follow."

A U.S. Navy destroyer fired three warning shots against four of Iran’s Islamic Revolutionary Guard Corps vessels on Sunday in the Strait of Hormuz, a U.S. Defense official said, asking not to be identified because the information isn’t public yet. About 20 percent of the world’s crude passes through the waterway that connects the Persian Gulf with the Arabian Sea.

"The market is overbought and under a lot of downward pressure," Yawger said. "The shots fired at the Iranian boats in the Strait of Hormuz didn’t do anything to the market. A few years ago that would have added a couple dollars to the price."

U.S. drillers boosted the rig count by four to 529 last week, according to data Friday from Baker Hughes. It’s the highest level since the week ended Jan. 1, 2016. Companies have added more than 100 rigs since the end of September.

"There’s concern about the rising U.S. rig count and what that will mean for production in the next few months," Michael Lynch, president of Strategic Energy & Economic Research in Winchester, Massachusetts, said by phone. "We’re getting confirmation of what was expected, the Arabian peninsula monarchies were expected to comply with the new targets. Iraq is the big question mark." 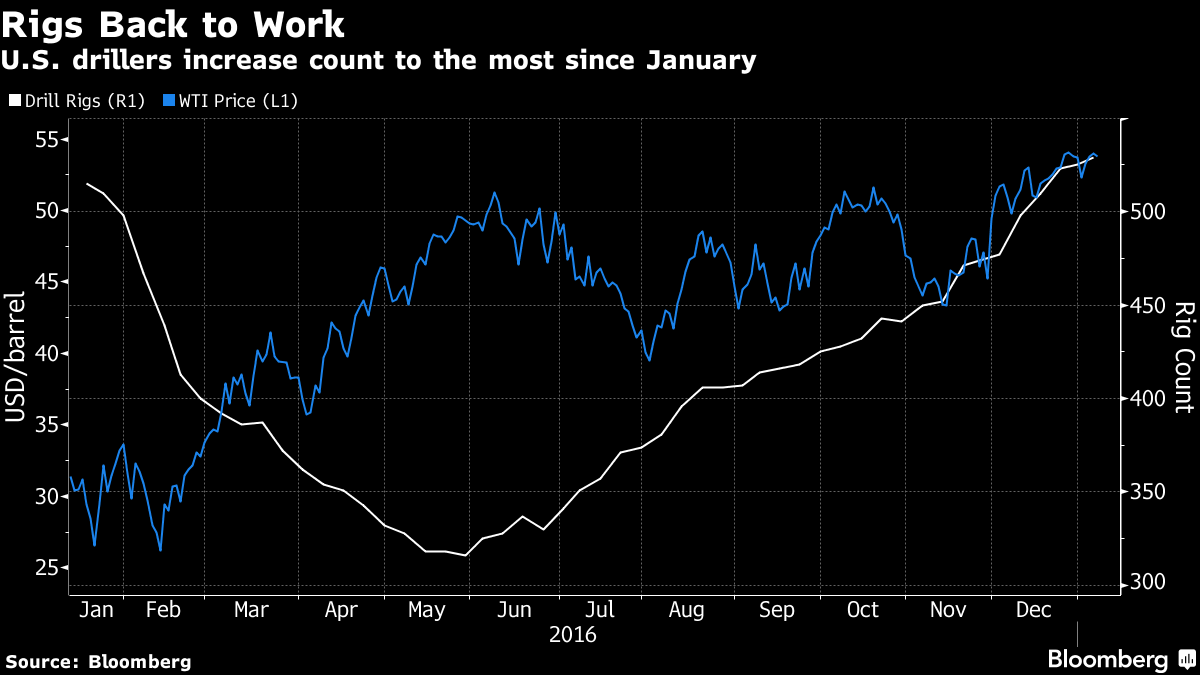 The market was also pressured as refiners are expected to reduce rates. Crude demand typically drops in the late winter as refineries plan maintenance programs after preparing for heating demand.

"As refiners prepare for spring maintenance, the crude oil market heads into the shoulder demand season and prices can sell off on little news," said Francisco Blanch, head of commodity markets research at Bank of America Merrill Lynch. "The low point of the Brent market last year was on January 20, while WTI hit a floor February 11. Seasonality plays a big role in the oil market, so any bad news tend to have an outsized impact on prices at this time of the year."