What the World Thinks About Trade After Brexit

EghtesadOnline: If the U.K. is to make a success of Brexit as Prime Minister Theresa May vows, it’s going to have to strike a string of trade deals with partners around the globe.

Whether it can was thrown into question last week by Ivan Rogers, who resigned as the U.K.’s ambassador to the European Union with a warning that “contrary to the beliefs of some, free trade does not just happen.”

According to Bloomberg, the U.K.’s commercial trade links with the other 27 nations of the EU will be the subject of heated debate once May triggers formal divorce talks sometime before April. May says she wants the “best possible deal,” but negotiations may be hindered by her ambitions on immigration, laws and the budget.

As for arrangements with nations outside the EU, the U.K. government’s ability to seal deals with them is for the moment limited by Britain’s membership in Europe’s customs union. That’s because the EU currently lines up accords on behalf of members, all of which agree to impose the same tariff regime.

Still, following June’s referendum, May’s government has already established working groups with some counterparts to get the ball rolling. Some countries are warning though that doing deals with the EU will remain their priority over engaging with the U.K. 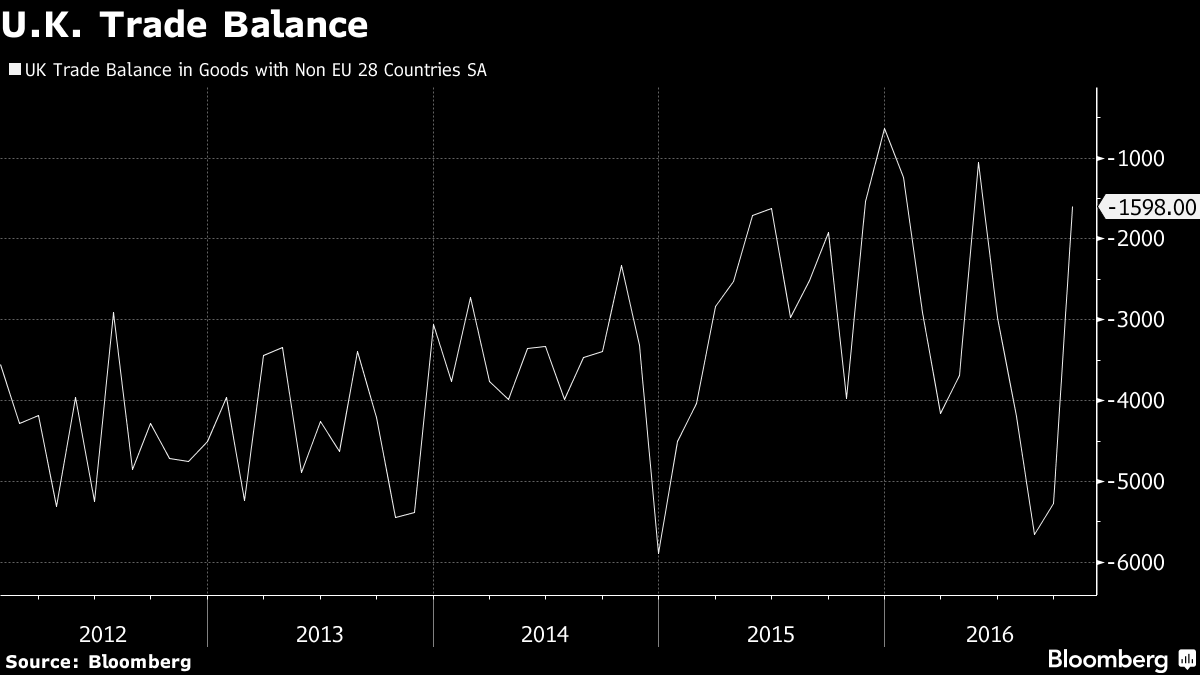 Bloomberg reporters conducted interviews and reviewed public comments for a sense of where other major trade partners now stand on their future trading ties with Britain.

Outgoing President Barack Obama said the U.K. would be at the “back of the queue” for a trade pact if it voted for Brexit, but President-elect Donald Trump may look more favorably upon Britain. Trump said before he won November’s U.S. election that the U.K. “would certainly not be at the back of the queue” and declared Britons were right to seize back control. Since then, his nominee for Treasury secretary, Steven Mnuchin, has said the Trump administration will favor bilateral trade deals.

Larry Kudlow, a potential chairman of Trump’s Council of Economic Advisers, said in December: “One of the things that’s gonna happen, I think very early, is the president-elect will wish to negotiate a free-trade agreement with Britain. He will move Britain from the back of the queue to the front of the queue and it will be a solid free-trade agreement.”

Trump advisers and congressional leaders reiterated that message when they met with U.K. Foreign Secretary Boris Johnson this week in the U.S., with Senator Bob Corker of the Foreign Relations Committee telling the BBC: “There’s no way that the United Kingdom will take a back seat -- they will take a front seat.”

The U.K. and China said in November they would establish a working group to enhance trade discussions “including options for the future trading relationship.”

China is studying a proposal for a trade agreement, Ministry of Commerce spokesman Shen Danyang said, adding that there is no concrete plan yet.

Geng Shuang, spokesman for the Foreign Ministry in Beijing, said: "Our position on negotiating and signing free-trade agreements or arrangements with foreign countries is clear. The Chinese side is ready to do that with interested countries on the basis of the WTO rules and in the spirit of mutual respect, mutual benefit, openness and inclusiveness, in a bid to promote trade and economic growth in the two countries, the region and beyond."

The Swiss government has created an advisory group that “will put forward suggestions” as to how to structure relations between Switzerland and the U.K. in future given they “will have to be redefined.”

Japan’s priority is to find a basic agreement on an economic partnership with the EU by the close of 2017 rather than focus on the U.K., Chief Cabinet Secretary Yoshihide Suga said in November.

“We will pay close attention to how the negotiations about Brexit proceed between the EU and the U.K., and deal with the issue appropriately,” Suga said. “At this point, we are not thinking of an agreement with the U.K."

Prime Minister Shinzo Abe said in May that broader trade agreements were more important to Japan than bilateral deals with individual countries.

Norway, the biggest exporter of natural gas to the U.K., will wait for clarity on the British government’s future relationship with the EU before cementing its own future relationship on trade with Britain, Norwegian Foreign Minister Boerge Brende said.

“I hope to see great cooperation between Britain and Norway and trade arrangements that are as good as possible,” Brende said in a Bloomberg interview in December. “It’s premature to discuss this in a formal way. It has to be informal dialogues before the formalities between the U.K. and the EU are decided on.”

The two nations agreed at a meeting in November to build on trade links and to establish a dialogue.

Canadian Finance Minister Bill Morneau said any pact with Britain would be based on the one signed recently with the EU, the Comprehensive Economic and Trade Agreement. “We have a long cultural and historical relationship with the U.K. and any eventual trading relationship I think will be positive and it will be founded on the basis of CETA,” he said.

Still, in an interview with the Financial Times, Morneau indicated a deal wasn’t a priority at a time when the U.S.’s Trump is criticizing the North American Free Trade Agreement, saying: “We’re not talking as much about Brexit as you are in the U.K.”

Poland, the biggest exporter of workers to the U.K., wants a future EU-U.K. trade deal to be “positive,” according to Deputy Foreign Minister Konrad Szymanski. The country’s surplus in trade with Britain rose five-fold over the past decade to 7.3 billion euros in 2015.

Turkish Economy Minister Nihat Zeybekci said in November that the U.K. and Turkey had agreed to “implement a wide-ranging trade agreement” post-Brexit. Britain’s Johnson said in September that he hoped for a “jumbo” pact with Turkey.

After Britain’s May visited in November, Indian Trade Minister Nirmala Sitharaman said her government was “happy to engage” with the U.K. about a free-trade agreement at some point. The Commerce Ministry said India would identify those sectors where it enjoys a competitive advantage. The two countries have established a working group on how to remove barriers to trade.

Britain and South Korea said in December that their officials would meet up to four times a year to discuss removing barriers to commerce and prospects for “future, ambitious trade opportunities” after Brexit. The U.K. government said South Korea is an especially promising market for luxury brands such as Burberry Group Plc, which has about 70 stores in the country, and high-end automakers like Jaguar Land Rover and Bentley. Other sectors with strong potential include renewable energy and nuclear decommissioning.

“We definitely want a bilateral trade agreement with the U.K.,” Kim Hak-do, deputy minister for trade negotiations at the Ministry of Trade, Industry and Energy, said in an interview in November. “Having a deal with the U.K. is important for us to have better access to the overall European market,” he said. “If it were a completely new deal, it would require a lot of resources until the final signing,” but it could be “relatively easy” if it mirrors South Korea’s current terms with the EU.

The U.K.’s May agreed to establish a working group to seek a trade deal when she attended a December summit of the council, which is composed of Saudi Arabia, Kuwait, the United Arab Emirates, Qatar, Bahrain and Oman.

Given the U.K. can’t negotiate deals, “there has been no initiative” from the British to start discussions, the economy ministry said by e-mail.

Two officials who spoke on condition of anonymity said Russia might eventually be interested in a free-trade agreement, but noted the relationship would need to be via the Eurasian Economic Union.

U.K. Chancellor of the Exchequer Philip Hammond visited South Africa in December and declared he would like to increase trade with the country. He assured his hosts of the U.K.’s “intentions and determination not to disrupt trade” during the Brexit process.

Australian Trade Minister Steven Ciobo and U.K. International Trade Minister Mark Price attended an inaugural meeting of a trade working group between the two countries. They discussed parameters of a future trade agreement. “At a time when the outlook for global growth is uncertain, it makes sense for us to seize this opportunity to put our future economic relationship on the strongest possible future footing,” Ciobo said.

A Brazilian official said the country is interested in a deal but cannot begin formal negotiations. As a member of Mercosur, Brazil would need to negotiate as part of that bloc, which has been in talks with the EU since 1999.

Thomas Lembong, an economic adviser to Indonesian President Joko Widodo, said the government intends to negotiate a trade deal with Britain after Brexit. It would be modeled on the agreement that the country is trying to complete with the EU, he said.

Argentina would be interested in negotiating a bilateral free-trade agreement with the U.K., potentially turning around often-testy relations between the two countries. Argentina already has been working bilaterally with the U.K. on a number of matters but, before launching trade negotiations, pending issues related to a long-standing dispute over the Falklands Islands need to be solved, Argentinian Foreign Minister Susana Malcorra said in Buenos Aires in December.

“You know very well that our relation with the U.K. has its special characteristics, and we need to resolve some things before advancing with a bilateral negotiation,” Malcorra said.

A deal with the U.K. would bypass the Mercosur trade bloc, which also comprises Brazil, Uruguay, Paraguay and the currently suspended Venezuela. Other members of Mercosur have also sought to make the bloc’s rules more flexible to sign their own bilateral trade agreements with other countries.

Luis Videgaray, then Mexico’s finance minister, said in June that the government had already drawn up a rough trade agreement with the U.K. when preparing for Brexit.

Iceland Foreign Minister Lilja Alfredsdottir said in October that she would make it a “priority” for the U.K. to join the four-nation trading bloc known as European Free Trade Association. The country is also studying areas of cooperation. President Olafur Ragnar Grimsson also has suggested joining his country, Greenland, Norway and the Faroe Islands in a group.

Britain and New Zealand have established regular talks on trade policy. “The U.K. is a major trading partner for New Zealand and we have signaled our interest in a free-trade agreement with them when they are in a position to negotiate one independently of the European Union,” Trade Minister Todd McClay said in October. “In the meantime, we hope this dialogue will allow us to develop a better understanding of one another’s trade interests.”