EghtesadOnline: Russia and Kazakhstan said they’ve met or exceeded their initial goals for trimming oil output, bringing cuts by non-OPEC nations in the first 10 days of this year to more than a quarter of the total pledged a month ago in Vienna.

Russia’s oil production has shrunk by around 130,000 barrels a day in the first week of January from a post-Soviet record of 11.25 million barrels a day in October, an official at the energy ministry’s CDU-TEK unit said Monday, asking not to be identified because of internal policy. The cuts from the world’s biggest energy producer go beyond its initial goal for a cut of at least 50,000 barrels a day this month, Bloomberg reported.

“The Russian side is fulfilling all articles of the agreement and all the obligations it took,” Kremlin spokesman Dmitry Peskov told reporters on a conference call Tuesday.

Russia and 10 other non-OPEC nations joined forces with the Organization of Petroleum Exporting Countries on Dec. 10 to end a global glut that’s crashed oil prices and shaken energy-rich economies. The pact -- the first between the two sides in 15 years -- involves a reduction of 558,000 barrels a day from non-OPEC countries starting in January.

Kazakhstan’s energy ministry said it has met its Vienna commitment of curbing production by 20,000 barrels a day in January. That reduction came after October’s start-up of the country’s $50 billion Kashagan oil field, which is set to increase production from 140,000 barrels a day in the first half of this year to 180,000 barrels in the second half, Energy Minister Kanat Bozumbayev said last month. 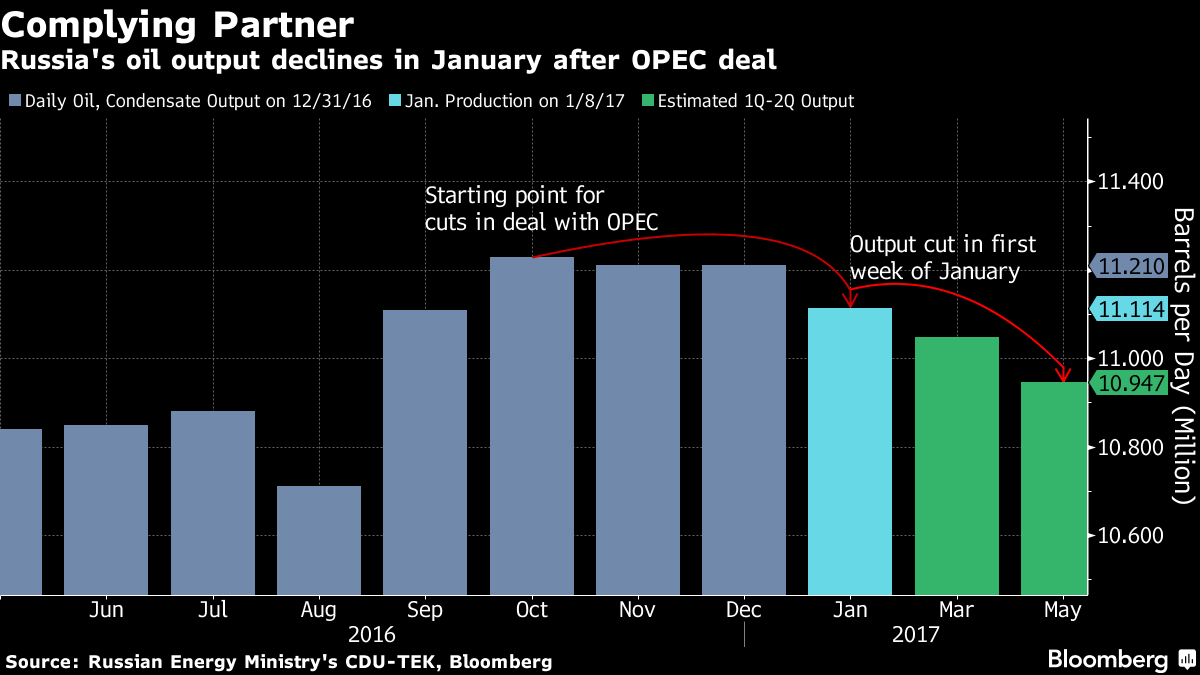 The combined 150,000 barrels a day cut represents 27 percent of the promised reduction by non-OPEC countries.

“If the cuts get confirmed, this is definitely positive, as compliance improves,” Giovanni Staunovo, an analyst at UBS Group AG said by e-mail. “We should soon see inventory draws materializing.”

Here are the other reduction announcements that have come out in the past month: