EghtesadOnline: Few countries have benefited from the oil market’s 2016 recovery like Iran. Since sanctions on its economy were eased in January, the Persian Gulf producer has doubled exports as prices rallied and won approval from OPEC last month to pump even more while other members cut. The key to continued growth will be attracting foreign investment to the energy industry.

Iran is definitely better off than they started the year,” said Carsten Fritsch, an analyst at Commerzbank AG in Frankfurt. “Further expansion plans for production have reached a plateau. They need foreign investment.” 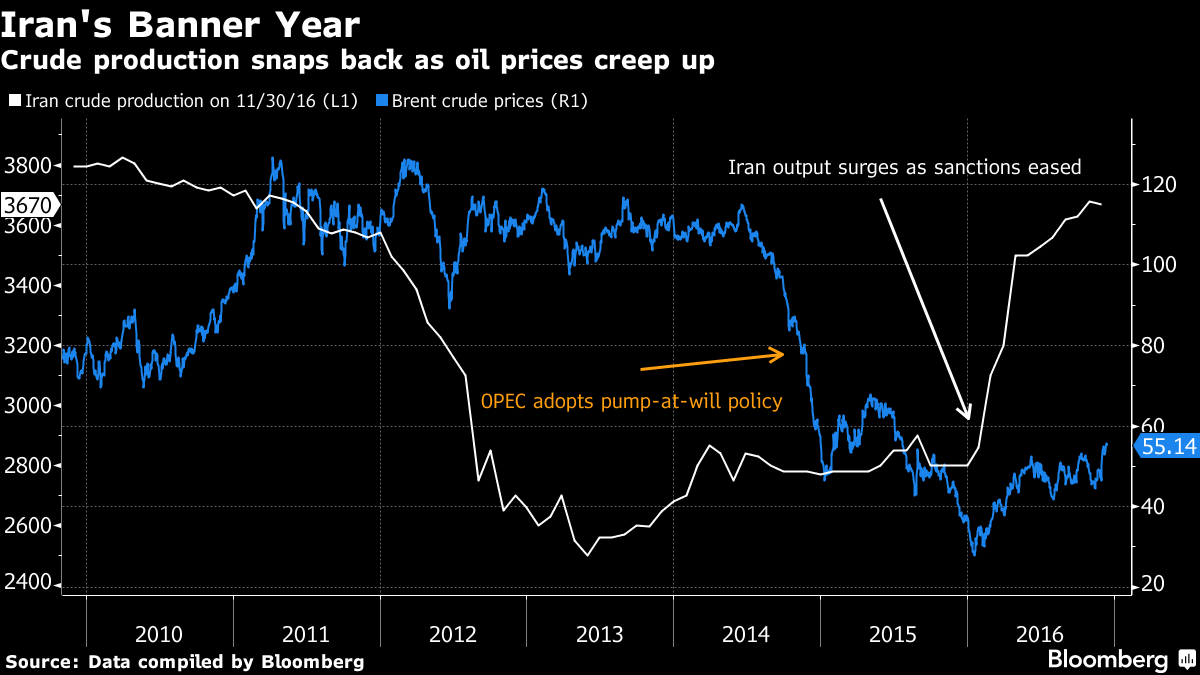 While most Gulf nations struggled with lower oil revenue after prices plunged to less than half of their 2014 levels, Iran, with a population about three times larger than Saudi Arabia’s and an economy less dependent on crude, accelerated its growth. To keep up the momentum, Iran is trying -- so far with limited success -- to attract more than $100 billion in foreign investment for an industry deprived for years of technology and funds, Bloomberg reported.

Iran has boosted production this year by 870,000 barrels a day. It pumped 3.67 million barrels a day in November, generating the equivalent of $172 million daily based on the average price for Brent crude last month of $46.98 a barrel, compared with $110 million a day last December, when Brent averaged $39.15. Iran has risen to become the third-largest producer in OPEC, according to data compiled by Bloomberg.

The country goes into 2017 strengthened by its achievement of avoiding output cuts after OPEC agreed in November to a collective reduction for six months starting Jan. 1. “That is a big success,” Fritsch said.

The group decided to pump less in an effort to buoy prices, and Brent is heading now for the biggest annual gain since 2009. Prices are up 49 percent this year, trading at $55.44 a barrel at 4:56 p.m. in Dubai. When Iran refused to cut and insisted instead on producing more, OPEC agreed to let it pump an additional 90,000 barrels a day to arrive at output of about 3.8 million.

“We need to reach pre-sanctions production levels,” Amir Hossein Zamaninia, deputy oil minister for international affairs, said in October at a conference in Tehran. The country pumped 4.085 million barrels a day before restrictions were imposed on its economy, he said.

Iran has been exporting more crude since April than it did under sanctions, and sales last month reached about 2.4 million barrels a day, the International Energy Agency said in a report on Dec. 13.

“There is a potential need for more crude by the end of next year,’’ Jaafar Altaie, managing director of Abu Dhabi-based consultant Manaar Group, said by phone from Abu Dhabi. “Iran will have to fight for those sales.’’

Iran was OPEC’s second-biggest producer behind Saudi Arabia until sanctions were intensified in 2012, but it lacks the expertise needed to add the roughly one million barrels of daily production capacity it’s targeting by the end of the decade, Fritsch and Altaie said.

“Oil production west of Karoun must reach one million barrels per day,” President Hassan Rouhani said last month, referring to three fields west of the Karoun River near Iran’s border with Iraq. “This is a realistic goal, and we need investment and technology.”

While the country has reached several preliminary agreements with international companies, it has yet to sign any concrete deals to boost crude production since Oil Minister Bijan Namdar Zanganeh outlined more than 50 potential projects at a Tehran conference in November of last year.

Iran also has the world’s biggest natural gas reserves, and in November it clinched a $4.8 billion gas development project with energy giants Total SA and China National Petroleum Corp. The country aims next year to bring companies such as Total, Royal Dutch Shell Plc and Russia’s Lukoil PJSC and Gazprom Neft PJSC back to its oil fields.

Zanganeh and National Iranian Oil Co. officials who pledged to offer oil-development blocks to potential investors and award the first contracts by March 2016 are now targeting a first tender in early 2017.

“There are positive signs with these recent deals,’’ Altaie said. “The big question is whether Iran can translate that into final contracts.”