How Global Oil Flows Might Look After OPEC’s Supply Shock

EghtesadOnline: OPEC’s quest to end a global crude glut already snapped a two-year slump in oil prices. Now attention is turning to how the group’s surprise decision to cut output will transform international trade flows of the world’s most important commodity.

The early signs are that Middle East suppliers will prioritize Asia, pushing competitors in Africa and the Americas to keep cargoes in the Atlantic region. Saudi Arabia has indicated it will initially maintain most flows to fast-growing Asia, while draining more heavily oversupplied Western regions. Kuwait is doing much the same, Bloomberg reported. 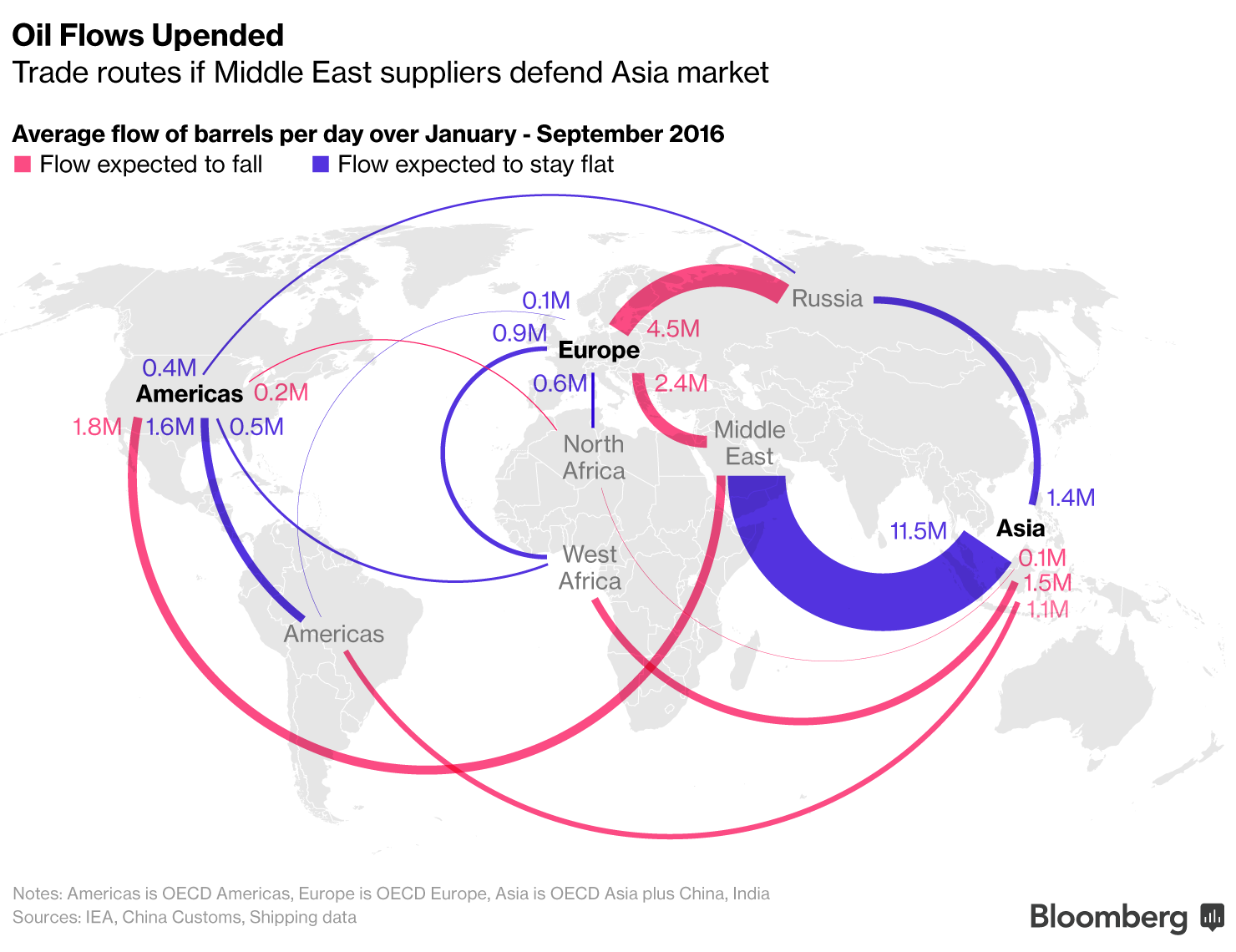 “They want to keep their market share to Asia,” Olivier Jakob, managing director at Petromatrix GmbH in Zug, Switzerland, said of Middle East suppliers. “The routes they will restrict the oil flow most will be to the U.S. and Europe.”

Understanding how and where oil flows matters to almost everyone in the supply chain. Crude traders need to know as they exploit regional price gaps, tanker owners depend on the cargoes being transported over long distances, while many refineries are configured to run most effectively using specific varieties of crude.

If Middle East producers do indeed fight to keep their Asian market share, then higher proportion of crude pumped in West Africa, the North Sea, the Black Sea and the Mediterranean could stay within that region, according to Erik Nikolai Stavseth, a shipping analyst at Arctic Securities AS in Oslo.

“The Saudis’ prioritizing growing Asian nations and leaving Western buyers more to themselves is an obvious negative for crude tankers,” since it would imply shorter-distance shipping and fewer cargoes, said Stavseth. Supertankers are already bracing for their worst year since 2013.

Still, there are many moving parts that dictate where barrels flow. Demand for tankers would take a hit if fewer cargoes were moved between from the Atlantic to Asia, a long-distance route. Cheaper shipping could then make such deliveries financially attractive. If one region gets a bigger cut than another, prices adjust, pulling cargoes from one area to another. Much will also depend on the grades the producers cut.

Much of the Middle East’s reductions will be heavy grades that are cheaper,says Eugene Lindell, a senior analyst at Vienna-based JBC Energy GmbH. If correct, then Venezuela and other Latin American suppliers could make up the shortfall, he said. By contrast, Sadad al-Husseini, an independent Dhahran-based analyst and former official at Saudi Arabia’s oil company, said he expects the bulk of Saudi cuts to be Arab Light because demand for Heavy is high.

Through the first nine months of this year, Saudi Arabia shipped about 3.1 million barrels a day to key Asian nations including China, Japan and South Korea, data compiled by Bloomberg show. Flows to the OECD Americas measured 1.2 million barrels a day, and 826,000 daily barrels to Europe.

OPEC pledged on Nov. 30 to cut supply by 1.2 million barrels a day, overcoming skepticism it would do a deal. Non-member nations said Dec. 10 they would curb 558,000 barrels a day. Brent crude has surged more than $8.50 to $55 a barrel since Nov. 29. West Texas Intermediate has rallied $6.40, making the U.S. grade potentially more attractive in international markets.

Nations participating in the curbs have begun to notify refiners of their plans for January deliveries, indicating trade routes that will be hit. Saudi Arabian Oil Co., the state oil company known as Saudi Aramco, plans to keep its full contractual supplies to at least five Asian refineries, according to officials at those facilities. Kuwait is also prioritizing Asia, according to an official from the state oil company.

While Saudi Aramco did curb January sales to parts of Southeast Asia, the nation also sold full volumes under long-term contracts for next month to North Asian nations including China and Japan -- key demand areas -- according to people familiar with the decisions. Keeping up supplies to China matters to the world’s biggest crude exporter, which has seen shipments from rival Russia growing steadily. 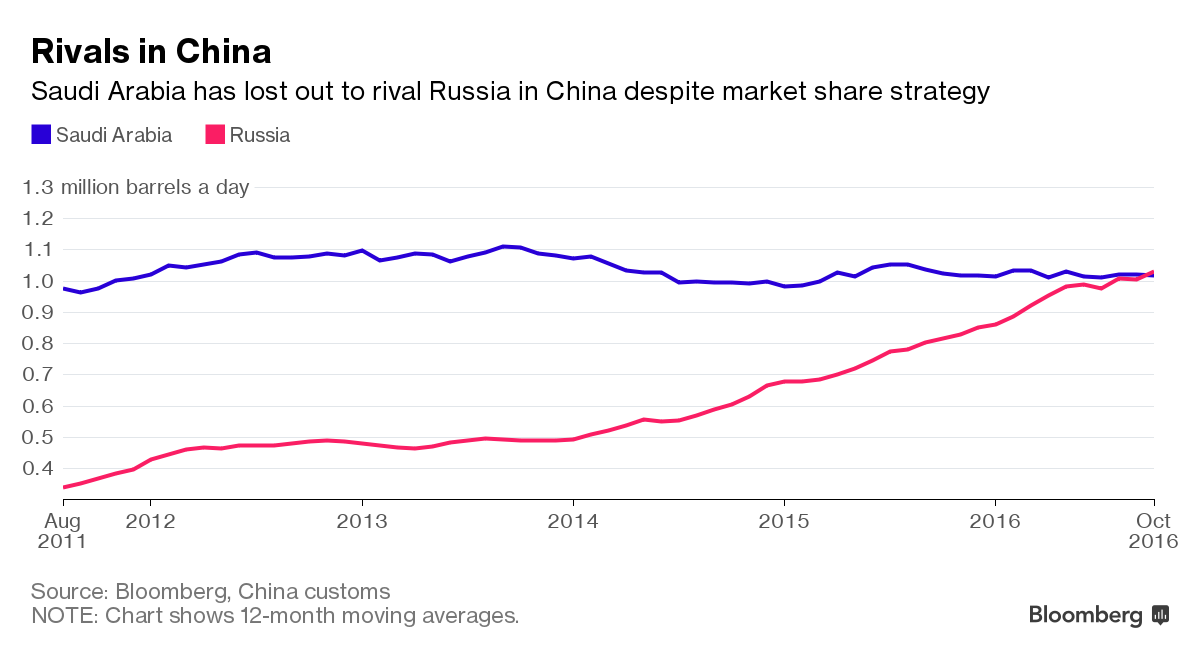 Meanwhile, Aramco has started to inform customers that it will begin to curb shipments to Europe and North America. One European refiner will see its portion of Saudi crude decline by 20 percent next month, according to a person familiar with the matter.

Consultants PIRA Energy Group and Energy Aspects Ltd. told clients the government in Riyadh has begun reducing the amount refineries receive under long-term contracts. Saudi Arabia’s initial approach is to keep crude that’s produced in the Atlantic Basin within that region, preventing it from flowing to Asia, according to a Gulf official familiar with the matter.

OPEC is aware of high inventories in “visible” markets like the U.S., which is another reason why it will target cuts there, according to Petromatrix’s Jakob.

“Crude oil inventories in the U.S. impact prices more than any other part of the world,” he said. If OPEC members “want to have a price impact, I think they will target lower flows to the U.S.”