OPEC Deal to Create Oil-Supply Deficit Next Half, IEA Says

EghtesadOnline: Global oil markets will swing from surplus to deficit in the first half of 2017 as OPEC and other producers follow through on an agreement to cut supply, according to the International Energy Agency.

Oil stockpiles will decline by about 600,000 barrels a day in the next six months as curbs by OPEC and its partners take effect, said the agency, which had previously assumed inventories wouldn’t drop until the end of 2017. Russia, the biggest producer outside OPEC to join the deal, will gradually implement the full reduction it promised, according to the IEA, Bloomberg reported.

Oil has gained about 17 percent since the Organization of Petroleum Exporting Countries agreed on Nov. 30 to trim output for the first time in eight years, an accord expanded on Dec. 10 with the participation of 11 non-members including Russia and Kazakhstan.

“Before the agreement among producers, our demand and supply numbers suggested that the market would re-balance by the end of 2017,” the Paris-based agency said in its monthly market report. “If OPEC promptly and fully sticks to its production target” and other producers cut as agreed, “the market is likely to move into deficit in the first half of 2017.” 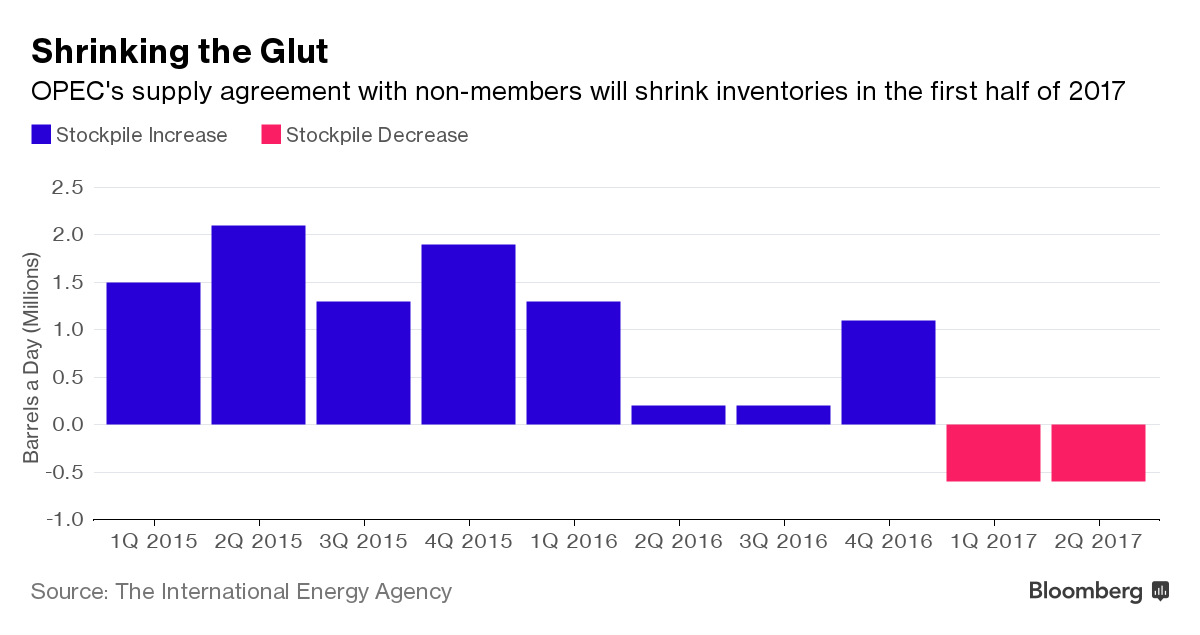 The stockpile declines will only occur if OPEC reduces supply enough to meet and maintain a target of about 32.7 million barrels a day, the agency said. The organization pumped a record 34.2 million a day in November, making the cut required to reach its target even bigger, according to the IEA, which advises 29 nations on energy policy.

“The move into deficit in the market comes with a big ‘if’,” said Harry Tchilinguirian, head of commodity markets strategy at BNP Paribas SA in London. “A number of moving parts will have to come together before this happens. In the end, the proof is in the pudding.”

There are some signs the market is already starting to tighten. While inventories of crude and refined oil in industrialized nations remain 300 million barrels above their five-year average, they dropped for a third month in October, the longest run of declines since 2011, according to the IEA.

The IEA reduced its 2017 forecast for production in Russia, which promised to deliver half of the total non-OPEC cut, by 140,000 barrels a day. Russian output of crude and condensate will fall to 11.3 million barrels a day in the second quarter from 11.6 million in the fourth as the country gradually implements a cut of 300,000 barrels, according to the report.

While Kazakhstan also agreed to make a minor reduction, the IEA kept its projections for the country unchanged following the government’s insistence that output from its three largest fields won’t be constrained. Kazakh production will grow by 160,000 barrels a day next year.