OPEC Deal Upends Everything in Oil Market, Not Just Prices

EghtesadOnline: No matter where you look in the oil market, key markers watched by traders have been going haywire since Wednesday -- and they show little sign of letting up.

Whether it’s a futures curve suddenly suggesting concerns that supply is shrinking or record trading of contracts designed to protect against price fluctuations, OPEC’s first output cut in eight years has sent the market into a spin, according to Bloomberg.

Look at the price of oil futures through 2019, and you’ll see that the shape of the so-called curve has changed dramatically in the last two days. Take the gap between the December 2017 and December 2018 contracts for West Texas Intermediate crude, the U.S. benchmark. On Thursday that spread moved into backwardation, a market condition suggesting concerns about supply constraints, for the first time since 2014. “It looks like OPEC saved the U.S. drillers, with 2018 likely falling on producer hedging and mid-2017 dropping on expectation of OPEC creating a tighter market,” Giovanni Staunovo, commodity analyst at UBS Group AG in Zurich, said by e-mail. 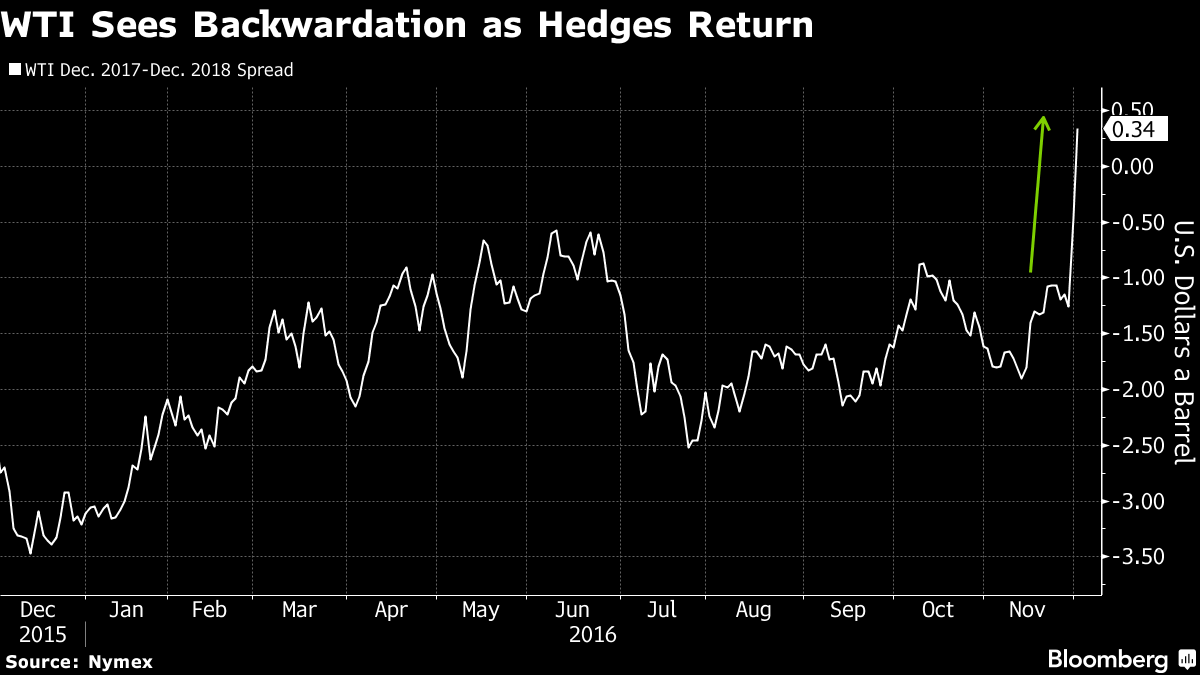 The so-called put-call skew measures the difference in demand for options used to protect against price drops compared those that insure against increases. The skew swung from its biggest bearish bias since July to the most bullish since June in the 24 hours before Wednesday’s close. “I’m not surprised that volatility was really high into the meeting because the outcome was so binary, but now I would expect it to come down a lot,” Societe Generale senior commodity strategist Jesper Dannesboe said by phone. He said he expects more demand for put options as U.S. producers lock in output at profitable levels. 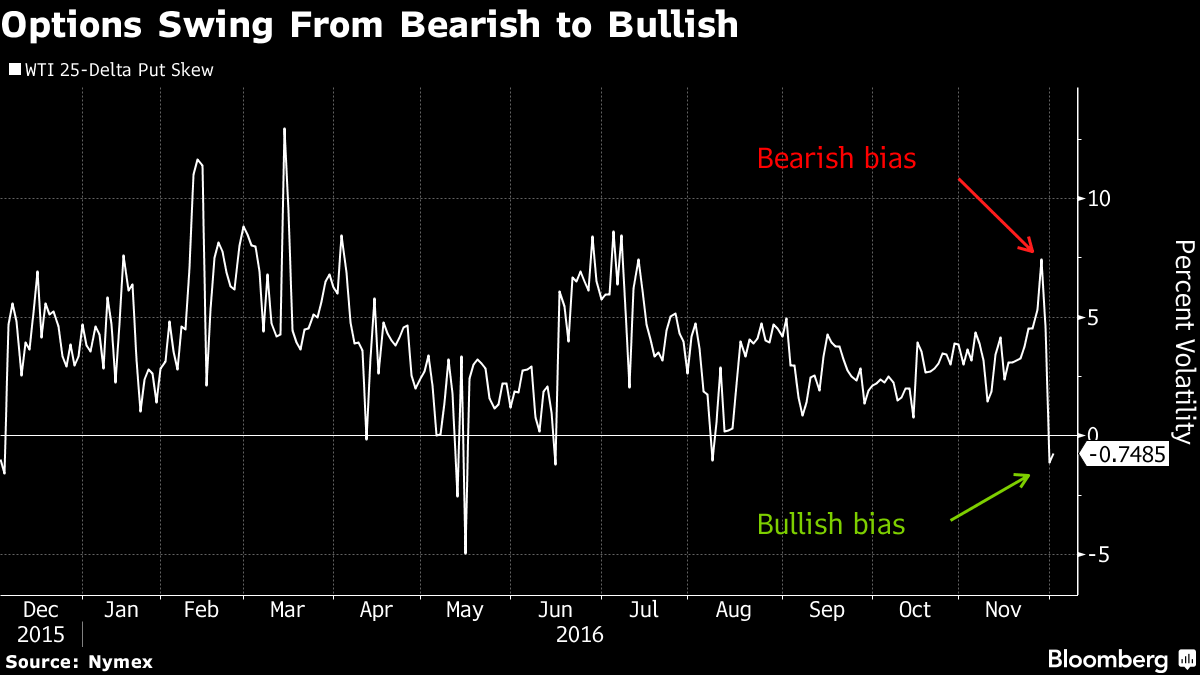 OPEC has also provided a boon to the world’s largest oil exchanges. Combined volumes of trading of Brent crude on ICE Futures Europe and WTI on the New York Mercantile Exchange surged past previous records. WTI volumes rose above 2 million contracts, equating to 2 billion barrels, for the first time ever. ICE Brent futures were just below the 2 million level, according to provisional data. The total amount of crude traded on both exchanges was the equivalent of about 45 days of global supply. 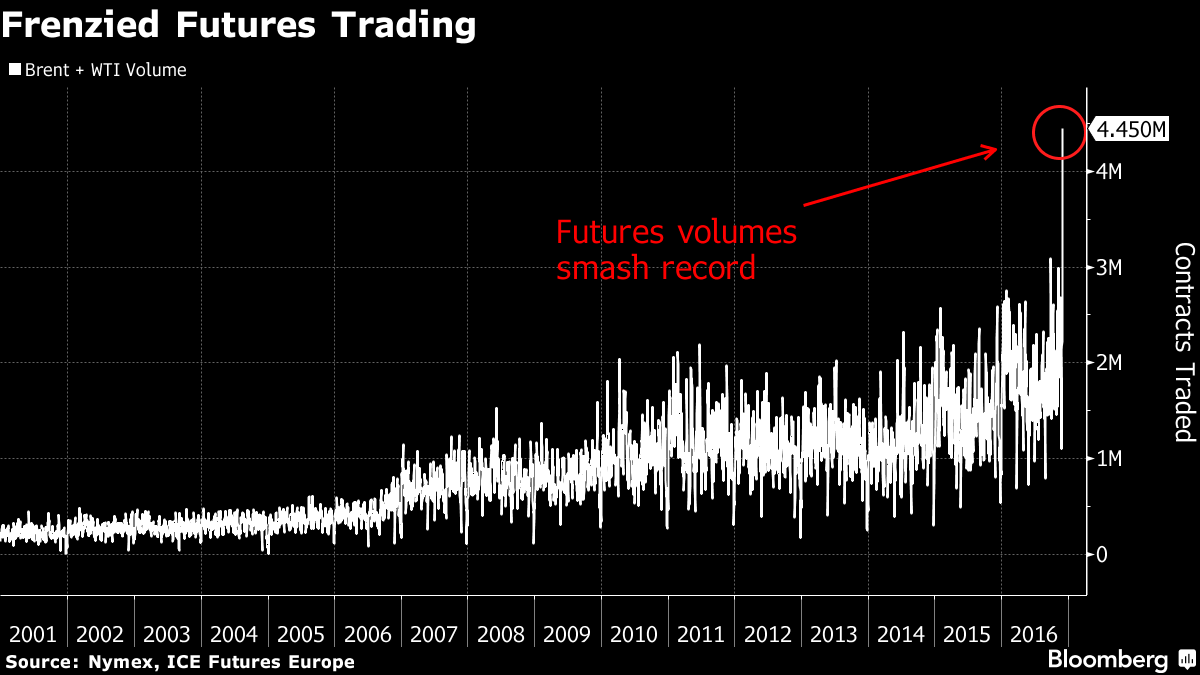 WTI options traders rushed to buy more contracts than ever, particularly those that profit when WTI rises above $60 a barrel. Olivier Jakob, managing director at consultant Petromatrix GmbH, said that “trading in WTI options has entered into a new dimension,” citing a “huge” addition of $60 call option contracts. There were also sizable trades of more than $10 million placed prior to OPEC’s decision. 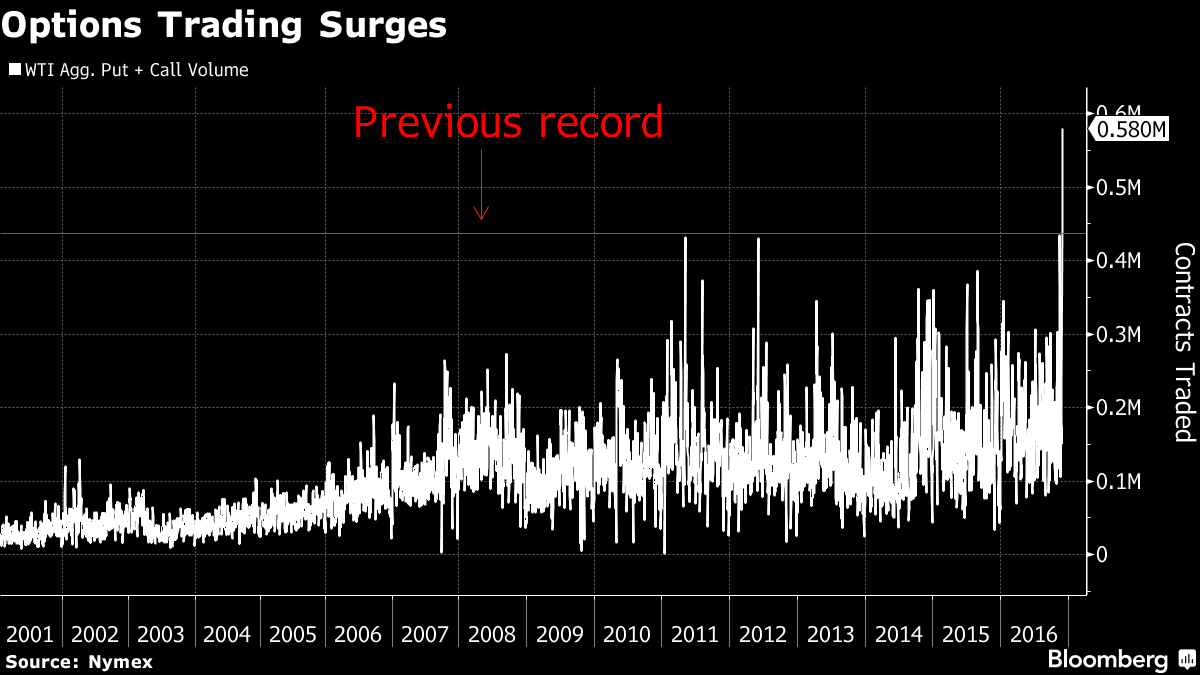 The gulf between Brent and WTI on Thursday hit its widest level since the end of September. That’s in part because an OPEC production cut affects global markets more than those in the U.S., according to UBS’s Staunovo. The gap between the two had narrowed markedly from last year, after the U.S. lifted its restrictions on crude exports. Cheaper crudes typically garner more buying interest. “The WTI-Brent spread should lead to increased U.S. exports,” Sarah Emerson, managing director of ESAI Energy Inc., a consulting company in Wakefield, Massachusetts, said by telephone. "The OPEC agreement helps U.S. producers.” 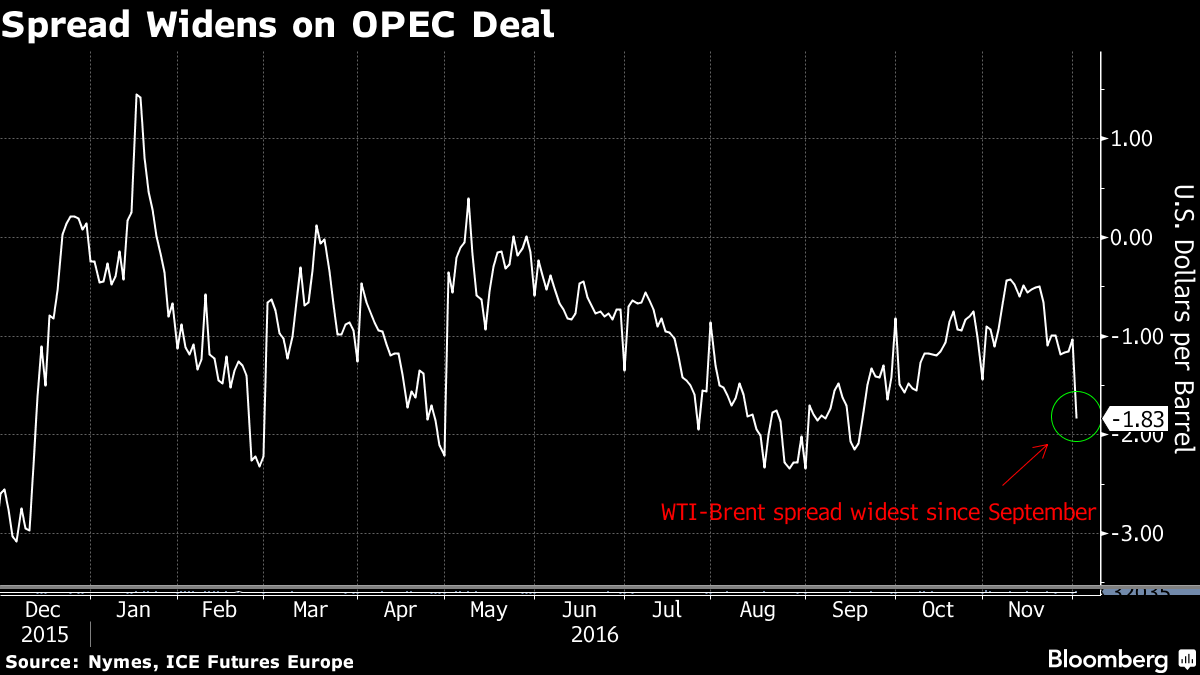