Oil Tanker Analysts Waiting on OPEC Plot Cuts of Their Own

EghtesadOnline: As OPEC discusses the deepest cuts to oil production in years, one group of people in the energy supply chain are preparing reductions of their own: analysts paid to monitor how much crude tankers can earn from hauling cargoes.

The producer club’s members are preparing for a Nov. 30 meeting in Vienna to limit their output to as little as 32.5 million barrels a day. While the measures would help prop up oil prices stuck in a 2 1/2 year slump, they could also remove enough output to fill five supertankers a week, just as a ballooning fleet of the vessels is starting to drag on freight rates, according to Bloomberg.

“Forecasts will be reduced,” said Erik Stavseth from Arctic Securities ASA in Oslo, in reference to the estimates that he and other shipping analysts make for tankers’ daily earnings. “It won’t be easy to replace the lost output in the Middle East. Lower production will mean higher oil prices that will push demand lower and hurt the shipping industry.”

The industry’s biggest ships, so-called very large crude carriers, are currently predicted to earn $31,000 a day in 2017, according to 13 analyst forecasts compiled by Bloomberg this month. While that’s not bad by historic standards, the estimated rate is more than 15 percent lower than anticipated in August. Benchmark earnings averaged about $40,000 a day so far this year, compared with about $68,000 a day in 2015. 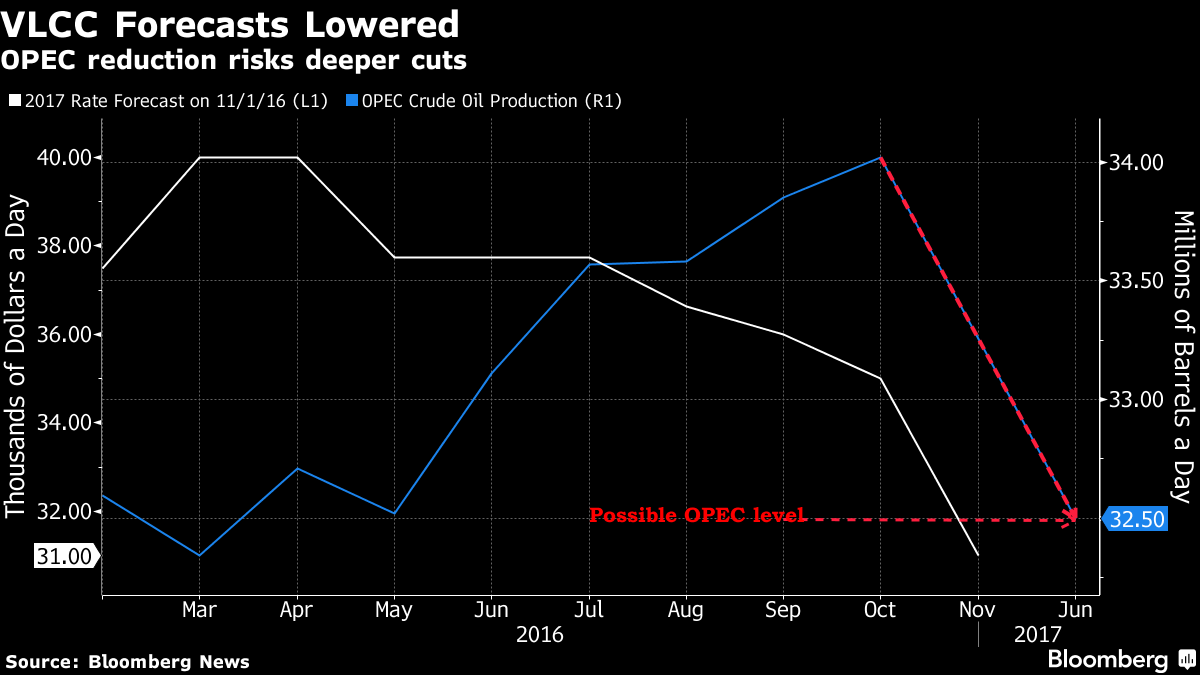 Shares of tanker companies so far stayed immune from the prospect of cuts by the Organization of Petroleum Exporting Countries, perhaps buoyed by a near tripling in daily rates since Sept. 28, when the group outlined its plan to cut output at a meeting in Algiers. Frontline Ltd. and Euronav NV, two of the world’s largest supertanker owners, gained by about 10 percent and 5 percent since late September.

Demand for their ships normally rises in the fourth quarter as oil refineries increase the amount of crude they process. Loadings from the Middle East also initially surged after the Algiers accord was set out.

“The cut will have a big impact on the shipping market,” said Magnus Fyhr, a managing director at Seaport Global Securities LLC. “The rates could be cut by $5,000 to $10,000 from the current forecast levels as it will remove demand.”

Goldman Sachs Group Inc. said in a Nov. 21 report that it expects oil prices in New York to rise to an average $55 a barrel during the first half of 2017 -- from $45 and $50 for the first and second quarters previously -- on an assumption that OPEC will agree to cut output to 33 million barrels a day and that Russia will freeze.

“A decision to cut output will mean higher oil prices, lower demand and trade and bad business for tankers,” said Per Mansson, a shipbroker at Affinity Shipping LLP in London .

Still, Mansson, who’s worked in the industry for more than four decades, doubts OPEC’s ability to implement its decisions. “We will see in time if they will really cut even if they decide to do it on the paper, because OPEC is not very famous for implementing everything it says.”

VLCC rates reached a seven-year high of $114,148 a day in December after OPEC embarked on a campaign of pumping as much oil as it could, sending crude prices tumbling while boosting shipments. The tanker market is now bracing for the reversal of that policy.

“Rate forecasts could be slashed to low $20,000s if OPEC cuts 1 million barrels a day,” said Frode Morkedal, an analyst at Clarksons Platou Securities AS, the investment banking unit of the world’s largest shipbroker. “The seaborne oil trade, including refined products, will average about 59 million barrels a day this year, OPEC’s cut would reduce it by 1.7 percent.”