The MSCI All Country World Index edged higher amid a rebound in emerging-market stocks, while the Dow average was little changed after rising to a record. Gold headed for its first back-to-back increase since Donald Trump’s election while copper paced gains in metals. Oil traded near $48 a barrel as OPEC members sought to reach a deal on output cuts. European bonds rallied on bets policy makers will extend their stimulus program, Bloomberg reported. 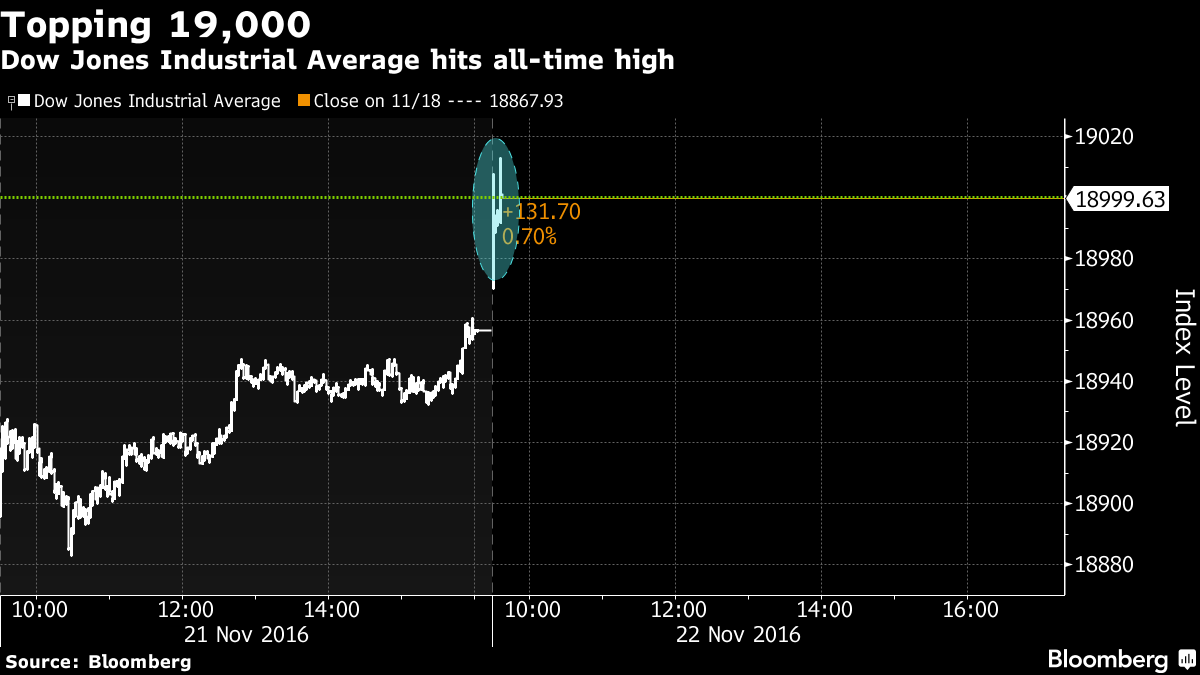 “We’ve finally broken through to new records,” said Heinz-Gerd Sonnenschein, an equity strategist at Deutsche Postbank AG in Bonn, Germany. “We can move on to pricing in the improving outlook: there are strong signs that the U.S. economy is in good shape and that bodes well for corporate earnings.”

Sales of previously owned U.S. homes unexpectedly climbed in October to the highest level since February 2007, a sign of momentum in the housing market a month before a jump in borrowing costs, National Association of Realtors data showed Tuesday. Reports on new home sales, durable goods and manufacturing are due Wednesday, as well as minutes from this month’s Fed meeting. U.S. markets will be closed Thursday for the Thanksgiving holiday.

MSCI’s global gauge rose 0.3 percent at 10:25 a.m. in New York, on course for its biggest monthly advance since July. 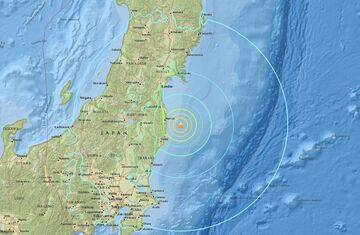 A magnitude 7.3 earthquake struck Japan off the coast of Fukushima.

The S&P 500 Index added 0.2 percent to 2,202.90, poised for a record high along with the Dow Average, the Nasdaq Composite Index and the Russell 2000 Index of smaller companies.

The MSCI Emerging Markets Index extended a two-day rally to 1.7 percent as benchmark gauges from Brazil to China and Russia advanced.

The Bloomberg Commodity Index is set for its biggest three-day advance since June. Goldman Sachs Group Inc. said Monday that investors should bet on higher prices in the next year as manufacturing picks up around the world, the first time the bank has recommended an overweight position for the asset class in more than four years.

Gold extended a rebound from the lowest in more than five months as a Bloomberg gauge of the dollar lost steam. Copper headed for the highest close since July 2015 while iron ore and steel in China surged to their daily limits.

Oil fell 0.5 percent in New York. The details of a supply accord will be finalized Tuesday and “everybody is on board,” Nigerian OPEC delegate Ibrahim Waya said in Vienna, where the group is meeting to discuss output quotas ahead of a summit next week. Libyan OPEC Governor Mohamed Oun said Monday that talks had gone well.

“An OPEC deal is not priced into the market yet, even if the confidence in a deal seems quite high,” said Bjarne Schieldrop, chief commodities analyst at SEB AB bank in Oslo. “I would be very surprised if we don’t see a cut next week and price moving to $55 a barrel.”

The dollar retreated from a near-six-month high against the yen as traders looked beyond the Fed’s December policy meeting in search of fresh impetus.

The greenback had tracked Treasury yields higher as futures traders fully priced in an interest-rate hike next month partly on speculation that Trump’s economic policies will fuel inflation. The weakness seen earlier this year will likely resume, according to Vasileios Gkionakis, London-based head of global foreign-exchange strategy at UniCredit SpA.

“The dollar is, probably on a trade-weighted basis, about 10 percent overvalued,” Gkionakis said in an interview on Bloomberg TV with Anna Edwards and Yousef Gamal El-Din. While the Fed is going to increase interest rates in December, the move higher in the dollar has “brought it way above of what real-rate differentials would suggest.”

China’s central bank raised its yuan fixing for the first time in 13 days as the dollar’s ascent eased. The rand climbed after the South African government said it would delay a plan to build new nuclear power plants, allaying concern that the cost of the program would strain fiscal targets.

Bonds climbed across Europe, finding relief after weeks of being whipsawed by political headlines and speculation about higher U.S. interest rates. With the next ECB policy decision due in December, investors are looking for clues in a series of recent remarks from officials who pledged to maintain current levels of monetary stimulus.

Officials from the ECB are signaling they “are not intending to reduce its monetary stimulus soon,” said Marius Daheim, a senior rates strategist at SEB AG in Frankfurt. “That points to divergence between monetary policy in the U.S., where we are looking for a rate hike in December by the Fed, and the ECB maintaining its steady hand and continuing with its ultra-loose monetary policy. That’s what is creating this payback.”

ECB President Mario Draghi said on Monday that the central bank is “committed to preserving the very substantial degree of monetary accommodation necessary to secure a sustained convergence of inflation toward” the target of just under 2 percent. This followed comments from Governing Council members Benoit Coeure and Francois Villeroy de Galhau on Monday signaling the time to start scaling down the QE program has not yet arrived.

The two-year Treasury note yield climbed three basis points to 1.10 percent, according to Bloomberg Bond Trader Data. An auction of two-year Treasuries Monday drew the highest yield since 2009 before a sale of five-year debt Tuesday.