Tesla Shock Means Global Gasoline Demand Has All But Peaked

EghtesadOnline: After fueling the 20th century automobile culture that reshaped cities and defined modern life, gasoline has had its day.

The International Energy Agency forecasts that global gasoline consumption has all but peaked as more efficient cars and the advent of electric vehicles from new players such as Tesla Motors Inc. halt demand growth in the next 25 years. That shift will have profound consequences for the oil-refining industry because gasoline accounts for one in four barrels consumed worldwide, Bloomber reported.

“Electric cars are happening,” IEA Executive Director Fatih Birol said in an interview in London, adding that their number will rise from little more than 1 million last year to more than 150 million by 2040.

The cresting of gasoline demand shows how rapidly the oil landscape is changing, casting a shadow over an industry that commonly forecasts decades of growth ahead. Royal Dutch Shell Plc, the world’s second-biggest energy company by market value, shocked rivals this month when a senior executive said overall oil demand could peak in as little as five years.

The IEA doesn’t share Shell’s pessimism. While the agency anticipates a gasoline peak, it still forecasts overall oil demand growing for several decades because of higher consumption of diesel, fuel oil and jet fuel by the shipping, trucking, aviation and petrochemical industries. 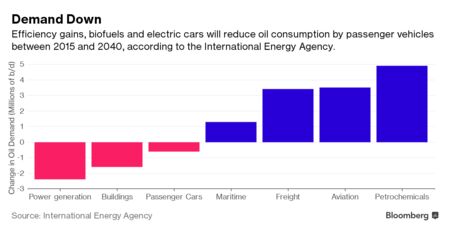 For Philip Verleger, president of the consultant PKVerleger LLC in Colorado and a veteran oil-market analyst, the IEA’s outlook is one of the more optimistic outcomes for the global industry.

“Refiners across the globe can only hope that this forecast turns out to be right -- because all the indications are today that consumption is going to begin dropping not in 2030, but probably in 2020,” said Verleger. “It’s the best news a dying patient can hope to get.”

The forecast is more pessimistic than the one released a year ago, when the IEA saw robust demand growth from now until 2030. 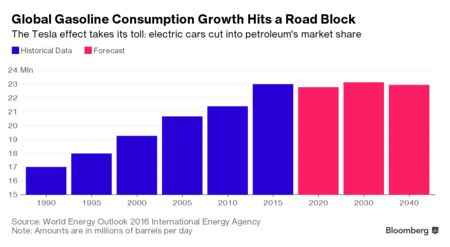 Gasoline has been the world’s choice to power automobiles. From the 1950s onward, when Henry Ford’s dream that every middle-class American could own a car became reality, gas stations sprung up next to drive-through restaurants and strip malls and transformed the landscape of America and economies across the globe.

Now, however, car companies -- most obviously Tesla, but also incumbents such as General Motors Co., BMW AG and Nissan Motor Co. -- are putting their money, and reputations, behind electric vehicles. With technology improving -- especially for batteries -- prices are falling. Tax breaks, particularly in China, are helping sales.

Global gasoline demand grew by nearly 20 percent between 1990 and 2015 despite competition from diesel in Europe, where the fuel benefited from tax breaks. In the next 25 years, gasoline consumption will drop 0.2 percent, according to the new IEA calculations. While the number of passenger vehicles will double to 2 billion by 2040, “the amount of oil we use for cars will be lower than today,” Birol said.

The biggest victim is likely to be refiners, which have spent billions of dollars over the last two decades to maximize gasoline output at the expense of other fuels. Birol said the changes in fuel-demand growth over the next 25 years will have “major implications” for the industry, which probably will have to re-tool their plants.

“Demand for gasoline will be much more affected than heavier fuels -- the refineries’ configuration will be affected," he said.

As gasoline demand sputters in advanced economies, middle distillates, fuels used to power trucks and jets, will continue to see growth in the next decade as economies expand. And new international rules will require that the heavy, dirty fuels currently used for marine transit be replaced with lower-sulfur diesel in 2020.

Refiners would be wise to target distillates such as diesel in lieu of gasoline as they grapple with fading consumption, said Michael Wojciechowski, vice president of Americas oil and refining markets research at Wood Mackenzie Ltd. in Houston.

"Diesel seems to be almost like a utility fuel going forward,” Wojciechowski said. “It’s got its ability to meet a lot of strategic objectives for refiners.”