Oil Bets Are Biggest in 9 Years Amid OPEC, Trump Volatility

Global markets were roiled after Donald Trump’s election as U.S. president and as OPEC continued negotiations on a deal to cap output. The U.S. dollar climbed to the highest since January. A measure of oil volatility surged last week to a seven-month high, a sign that traders were anticipating bigger price swings, Bloomberg reported. 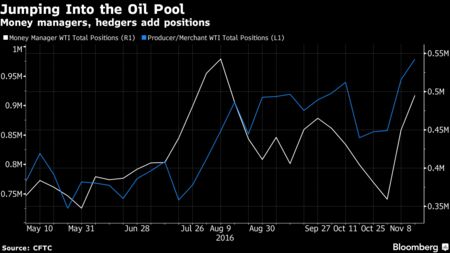 Wagers on higher and lower prices held by speculators and hedgers reached 1.47 million contracts in the week ended Nov. 15, the most since 2007, U.S. Commodity Futures Trading Commission data show. Trading volume of calls giving investors the right to purchase WTI futures surged to a record that day. The CBOE Crude Oil Volatility Index reached the highest since April.

“There’s tension in the market, with both producers and consumers worried about what OPEC does or won’t do on Nov. 30,” said Tim Evans, an energy analyst at Citi Futures Perspective in New York. “They want to be protected from surprising price moves.”

Investors are weighing the chances that the Organization of Petroleum Exporting Countries will complete a deal to cap output at its Nov. 30 meeting in Vienna. While Saudi Arabian Energy Minister Khalid Al-Falih told Al Arabiya television he’s optimistic a deal will be reached, only 7 of 20 analysts surveyed by Bloomberg last week expect the group to set output targets for its members.

OPEC agreed in September to cut their collective output to 32.5 million to 33 million barrels a day and has been trying to persuade other suppliers, notably Russia, to join the cuts. OPEC Secretary General Mohammed Barkindo said he’s confident the group can reduce record oil inventories and bring forward the rebalancing of the market.

“The Saudis are working hard to reach a deal,” said John Kilduff, a partner at Again Capital LLC, a New York-based hedge fund that focuses on energy. “You don’t fight the Fed in the bond market and when it comes to oil you don’t fight the Saudis.”

The September agreement marked the end of OPEC’s two-year long experiment with pumping at will. Saudi Arabia led the group in the effort to grab market share and curb the development of more expensive reserves such as U.S. shale.

While U.S. production has dropped from last year’s 44-year high, the decline is slowing. The Energy Information Administration this month raised its output forecast for 2017. Rigs targeting oil in the U.S. rose the most in 16 months last week, according to Baker Hughes Inc.

Producers and merchants increased short positions, or protection against lower WTI prices, to the highest level since March 2011. They added 66,613 bearish contracts over the past two weeks as prices retreated from last month’s peak at above $50 a barrel.

“The Saudis want higher prices but won’t sacrifice just to see a major competitor, U.S. shale, benefit,” said Sarah Emerson, managing director of ESAI Energy Inc., a consulting company in Wakefield, Massachusetts. “The Trump election changes things. In one day the U.S. shale business got better. The government will be more responsive to the industry.”

“I suspect that when the OPEC meeting is over there will have been a lot more smoke than fire,” said Michael Lynch, president of Strategic Energy & Economic Research in Winchester, Massachusetts. “If they don’t come up with a convincing agreement, they’ll be forced to revisit the issue before long.”