EghtesadOnline: Oil extended gains as Iran signaled optimism OPEC will agree to a supply-cut deal and Iraq said it will offer new proposals to help bolster the group’s unity before members meet next week in Vienna. 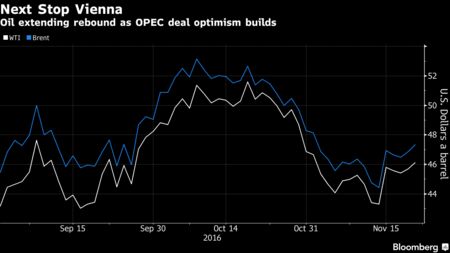 Oil has rebounded since hitting the lowest in almost two months last week as members of the Organization of Petroleum Exporting Countries began making reneweddiplomatic efforts before their meeting Nov. 30 to finalize the output deal informally agreed to in September. The group is seeking to trim output for the first time in eight years, a plan that has been complicated by Iran’s commitment to boost production and Iraq’s request for an exemption to help fund its war with Islamic militants.

“It’s pretty clear that some people are convinced in the market that this could lead to production cuts,” Michael McCarthy, chief market strategist at CMC Markets in Sydney, said by phone. “The potential for breaches of any announced agreement is very high, but it is a solid move and it is coming on pretty reasonable volumes.”

West Texas Intermediate for December delivery, which expires Monday, rose as much as 66 cents to $46.35 a barrel on the New York Mercantile Exchange and was at $46.24 at 3:07 p.m. in Hong Kong. Total volume traded was about 11 percent above the 100-day average. The more-active January contract added as much as 70 cents, or 1.5 percent, to $47.06 a barrel.

Brent for January settlement gained as much as 68 cents, or 1.5 percent, to $47.54 a barrel on the London-based ICE Futures Europe exchange. The contract closed at $46.86 a barrel on Friday, capping a 4.7 percent gain for the week. The global benchmark traded at a premium of 50 cents to January WTI.

It’s likely that OPEC producers will honor the output cut agreement and will try to put it into action, Iran’s Zanganeh said after meeting with OPEC’s secretary-general, Mohammed Barkindo, in Tehran on Saturday. Iraq’s “legitimate demands” shouldn’t be considered an obstacle to reaching a deal to freeze production, Al-Luaibi said.