Trump May ‘Dig’ Coal, But Industry’s Outlook Is Flat at Best

EghtesadOnline: He can roll back regulations, slash government jobs, pull out of global treaties and strip the tax benefits from renewable energy. But can Donald Trump make coal great again?

According to Bloomberg, coal’s share of the U.S. electricity mix has plunged to less than a third today from about half in 2008, the result of cheap natural gas and stepped-up efforts to curb carbon emissions. While Trump, promising to restore jobs, drew boisterous crowds in mining country under slogans such as "Trump Digs Coal," his best efforts may do little more than halt the industry’s steep decline.

“Donald Trump has the courage, the passion and the commitment to get it done,” said Robert E. Murray, the industry’s most outspoken champion and chief executive officer of Murray Energy Corp. “But I do not see an increase in the market for coal.”

In May, Murray endorsed Trump after meeting the then-candidate in New York. At the time, Murray said Trump cares "very much" about coal miners and coal-mining jobs. On Wednesday, Murray said that "nobody" worked harder to make Trump president than he did, adding, “and we’re not done yet."

Now Murray said he’s positioning his company, the country’s largest privately held coal miner, to compete in a U.S. market in which power plants consistently burn about 650 million to 700 million tons of thermal coal a year. That’ll be enough to keep coal’s share in the power mix stable, he said in an interview.

Maintaining that level, though, will take extra effort by Trump, Murray said. For starters, he wants the president-elect to roll back three big pieces of Washington regulation.

“Taking many of Obama’s coal regulations off the books would require a rewrite of the Clean Air Act, and there will be big legislative hurdles to achieving that,” Barnett said. Sixty votes are needed in the Senate unless the majority decides to "go nuclear" and end current rules on filibusters, he said.

Republicans “will certainly try hard to undo some of Obama’s energy rules,”  Barnett said. Then, “we’ll see how good Senate Democrats are at protecting certain policies that are near and dear to them.” 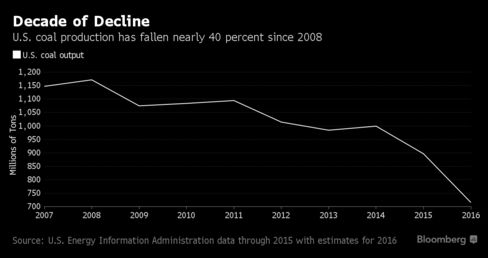 Beyond those steps, Murray wants President Trump to enact massive job-cutting in Washington. He would eliminate the Department of Energy, a Cabinet-level agency founded in 1977, and trim by roughly half some of the other regulators overseeing his industry. That includes the Environmental Protection Agency, the Departments of Interior and Labor, and the Mine Safety and Health Administration, he said.

Finally, the U.S. must pull out of any global agreements to limit climate change, Murray said, adding, "so-called global warming is a total hoax.”

Even if all that occurs, coal’s future remains daunting in the face of cheap natural gas and ever-cheaper solar and wind power, said Nick Akins, the CEO of American Electric Power Co., which owns utilities from Texas to Ohio and is one of the biggest U.S. coal burners.

Natural gas futures in New York have averaged $2.432 per million British thermal units this year, down more than 40 percent from 2014 levels.

Trump’s support doesn’t alleviate investor concerns about utilities that own coal-fired plants, according to Akins. “There’s recognition that we need to invest to continue to balance out our portfolio” beyond coal, he said by phone. “You don’t want to be married to any single fuel. You want to be balanced.”

“While coal had a very tough go during the Obama administration, a lot of that is due to natural gas and it’s unlikely that anything that Trump does will dramatically increase natural gas prices,” said Ted O’Brien, who recently stepped down as Chief Executive Officer of Doyle Trading Consultants LLC.

Trump himself has supported the benefits of both coal and natural gas. And he’s raised the prospect that his energy secretary might be Harold Hamm, the founder and CEO of shale explorer Continental Resources, and a pioneer of the fracking boom key to low gas prices.

Hamm’s take: "We need both," he said in an interview on Wednesday.

“We’re essentially the Saudi Arabia of natural gas,” said Rob Thummel, managing director and portfolio manager at Tortoise Capital Advisors LLC in Leawood, Kansas. “Will the energy renaissance continue? Will fracking continue? I think the answer is a resounding yes.”

What’s more, wind and solar operating costs have been falling even without government subsidies, Thummel added. “The most practical solution right now is two-fold: continue to use more and more low-cost natural gas as well as the continued research and development of renewable energy,” he said.

For his part, Murray acknowledges that gas will stay a formidable rival. While he sees U.S. thermal coal production remaining steady under Trump, he thinks his own operations will grow to about 100 million tons from 73 million tons. That suggests he’ll take market share from others with higher production costs.

For now, Murray’s hailing the arrival of President Trump as a “repudiation” of President Obama, the “liberal elitists on Wall Street and in Hollywood” and “radical environmental industries, such as the makers of costly windmills and solar panels.’’

In recent months, Murray joined the Evangelical church. He was dwelling on that change while he was watching the election results in the early morning Wednesday. He was sitting in his Ohio home, he said, reflecting on his family, his workers and Biblical figures.

“God picked the most imperfect people on the planet to carry out his will,” Murray said Wednesday. “If you want to pick an imperfect guy to carry out God’s will, who better than Donald Trump?”