EghtesadOnline: U.S. stocks posted their longest slide since 1980, while Treasuries rallied after data showing progress in the American labor market did little to soothe anxiety over the presidential election. Oil slumped.

The S&P 500 Index dropped for a ninth straight day, a gauge of equity volatility had the longest stretch of gains on record and Treasuries climbed the most since September ahead of next week’s vote. All the jitters sent the dollar down after a brief advance that followed data showing U.S. jobs rose at a steady pace in October, supporting a Federal Reserve hike next month. Oil sank as hopes faded that OPEC will be able to implement a deal to cut output, reports Bloomberg. 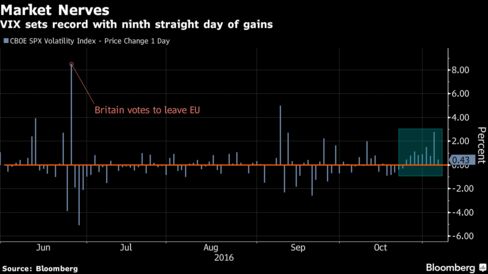 Traders have piled into relatively safer assets as opinion polls showed the U.S. presidential race tightening after Hillary Clinton seemed poised for victory. While American stocks have almost always risen in the days before a presidential election, anxiety about the outcome of the Nov. 8 vote has weighed on the market this time, overshadowing key reports such as the jobs data.

“The jobs number should increase rate-hike odds and push up the dollar further, but nothing is happening in the markets ahead of the election,” said Dennis Debusschere, a senior managing director and global portfolio strategist at Evercore ISI in New York. “All expectations of the rate outlook and by extension the markets are being muted by election uncertainty.”

A report today showed payrolls climbed by 161,000 last month following a 191,000 gain in September that was larger than previously estimated. Wages rose from a year earlier by the most since 2009, and the jobless rate fell to 4.9 percent. The figures are likely to keep the Fed on track to raise borrowing costs next month for the first time in 2016.

The S&P 500 fell 0.2 percent to 2,085.18 at 4 p.m. in New York, after erasing a 0.5 percent advance. The gauge fell to as low as 2,083, its average price during the past 200 days, and a technical level it hasn’t breached since the rout that followed the U.K.’s June vote to leave the European Union. The CBOE Volatility Index surged 73 percent in nine days.

“The U.S. elections are the elephant in the room for markets at the moment,” said Christian Gatticker, Zurich-based head of research at Julius Baer Group Ltd. “The best case is gridlock where Hillary wins and works with a Republican Congress, while a worst case is a hung vote.”

The Stoxx Europe 600 Index extended its weekly slide to 3.5 percent, the biggest since February. Erste Group Bank AG sank after Austria’s biggest bank forecast lower profitability next year. Commerzbank AG slipped after the German lender swung to a loss in the third quarter. Cie. Financiere Richemont SA jumped as the maker of Piaget jewelry unveiled a sweeping overhaul of top management and its board as it reported a plunge in sales.

The dollar fell for a sixth straight day, the longest stretch of losses since March, as traders kept their focus on the vote for the White House.

The Bloomberg Dollar Spot Index lost 0.2 percent, erasing earlier gains. The greenback fell 0.3 percent to $1.1137 per euro and was little changed at 103.07 yen.

"It would be difficult for the market to move much given the elections on Tuesday," said Andres Jaime, a foreign-exchange strategist in New York at Barclays Plc.

The pound posted its best week since 2009 as a flurry of news offered relief for the currency. Sterling climbed on speculation a High Court ruling will delay or soften the terms of the nation’s exit from the European Union and it received a further boost when the Bank of England said it’s no longer expecting to cut interest rates again this year.

China’s yuan dropped to a record low against a trade-weighted currency basket amid speculation policy makers are using recent dollar weakness to boost the competitiveness of the nation’s exporters.

The employment report "was on target, but it wasn’t overly strong,” said Timothy High, U.S. strategist at BNP Paribas SA in New York, one of 23 primary dealers that trade with the Fed. “Given that it’s out of the way, the focus is more towards the uncertainty next week, the election clearly. The uncertainty will bring in some buying.”

Global bond markets are coming off their worst month in two years amid investor concern that major central banks are preparing to gradually reduce unprecedented monetary stimulus. The Fed’s policy committee this week cited signs that inflation is accelerating as it said the case for higher borrowing costs had strengthened, even as it left its key rate target unchanged.

Futures traders assigned about a 74 percent probability of tighter policy by December, up from a 69 percent chance seen a week ago.

The Bloomberg Commodity Index fell 3.1 percent this week, the most since July 8.

Oil dropped 1.3 percent in New York, bringing the six-session decline to 11 percent. Prices closed Thursday at the lowest level since OPEC reached a preliminary accord in Algiers for the cuts, and extended losses Friday after Reuters reported that Saudi Arabia threatened to raise output if other members didn’t agree to cuts. Losses eased after OPEC Secretary-General Mohammed Barkindo said the kingdom didn’t make the threat.

"We’re not seeing any path for an OPEC agreement," said John Kilduff, a partner at Again Capital LLC, a New York-based hedge fund that focuses on energy. "There’s too much output growth in OPEC outside of Saudi Arabia. It’s asking too much of Saudi Arabia and its Gulf allies to make the cuts needed for this to work."

West Texas Intermediate for December delivery dropped 59 cents to settle at $44.07 a barrel on the New York Mercantile Exchange. Brent for January settlement fell 77 cents, or 1.7 percent, to $45.58 a barrel on the London-based ICE Futures Europe exchange.

Gold held near a one-month high as it was caught in the crossfire between haven demand and prospects for higher U.S. interest rates.