EghtesadOnline: Iranian steel mills produced a total of 19.31 million tons of crude steel during January-September, which indicates a 6% rise compared with the corresponding period of 2018, the latest report released by the World Steel Association shows.

The country's September output grew 6.7% year-on-year to hit 2.13 million tons, according to the Brussels-based international trade body for the iron and steel industry.

The country is placed between Brazil (9th) with 24.61 million tons of production and Italy (11th) with 17.62 million tons, the new report shows.

The world’s 64 steelmakers produced a total of 1.39 billion tons of steel over the nine-month period, up 3.9% YOY. 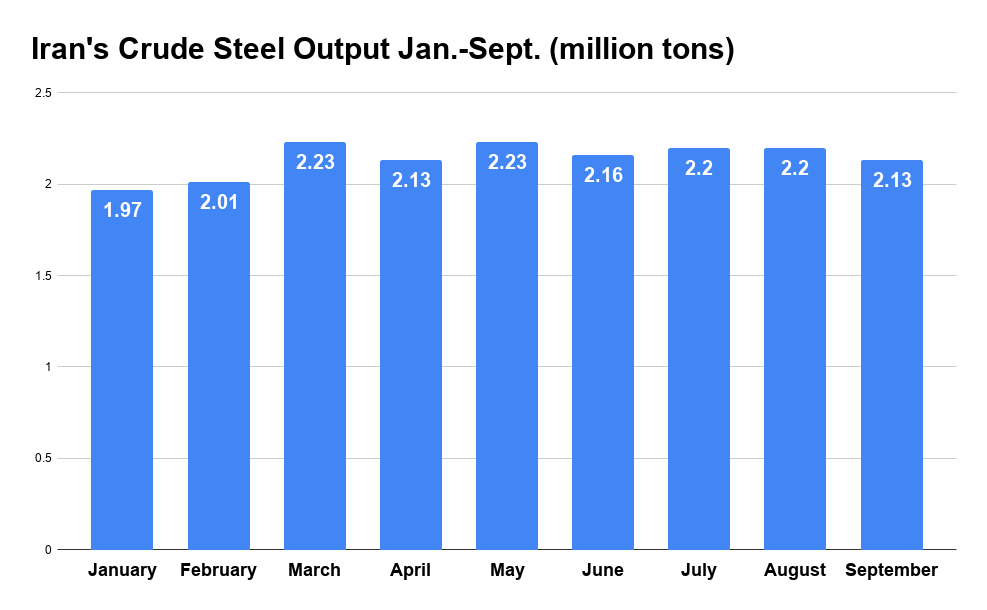 Crude steel is defined as steel in its first solid (or usable) form: ingots, semi-finished products (billets, blooms and slabs). This is not to be confused with liquid steel, which is steel poured.

Iran was the second biggest producer in the world with 21.52 million tons of DRI production during the nine months under review to register a 15.8% year-on-year growth.

Iran aims to become the world’s sixth largest steel producer as per the 20-Year Vision Plan, which targets annual production capacity expansion to 55 million tons and 20-25 million tons of exports per year by 2025. Iranian steel mills have so far realized 34 million tons of the capacity target.

The country has been working to increase its iron ore processing capacity, including both DRI and hot-briquetted iron production, to reach its steelmaking expansion target.

According to Deputy Minister of Industries, Mining and Trade Khodadad Gharibpour, Iranian steel industry is an export-oriented one and exports more than 40% of its steel output.