EghtesadOnline: A review of Iran’s commercial exchanges with African countries during the 10 years to March 20, 2019, shows Iran witnessed the highest level of trade in the fiscal 2017-18 at $1.2 billion.

According to Director General of Trade Promotion Organization of Iran's Arab-African Office Masoud Kamali Ardakani, Iran exported $642 million worth of commodities to Africa last year (March 2018-19) and imported goods worth $16 million from Africa in return.

With 54 countries, Africa is the second most populous continent in the world after Asia, according to Financial Tribune.

“Iran has embassies in 25 African countries and commercial attaches in Kenya, South Africa, Algeria, Tunisia and Nigeria,” he said.

According to Kamali, Iran has joint commissions with 15 African countries, eight of which are active (South Africa, Nigeria, Tunisia, Ghana, Kenya, Zimbabwe, Algeria and Niger). 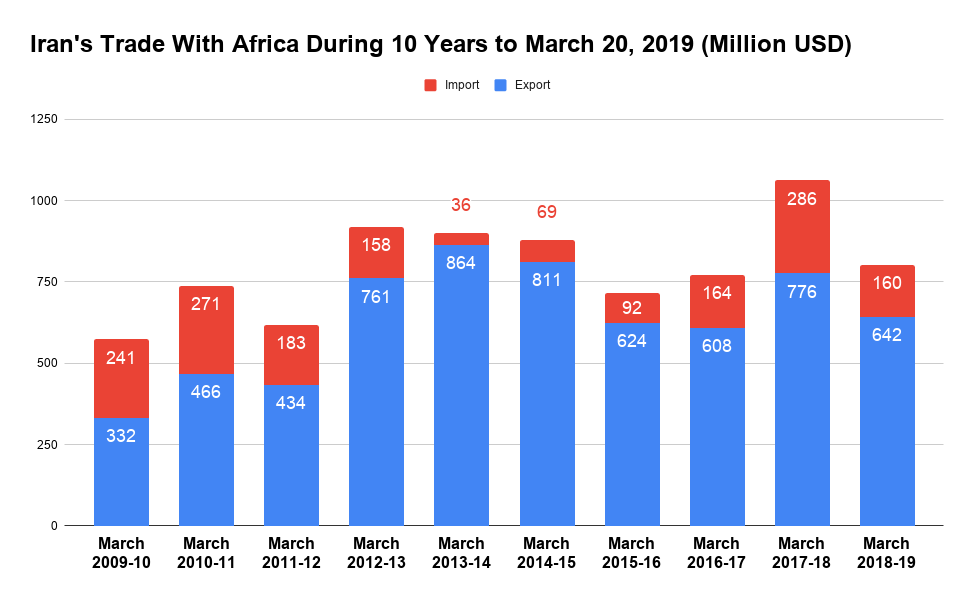 Iran’s total exports to African nations during the 10 years under review amounted to $3.6 billion.

The TPO official noted that despite efforts to promote Iran’s trade with Africa, economic cooperation between Iran and African nations are far less than the capacities and mutual interests of the two sides due to the lack of direct sea and air transportation infrastructures, high marketing and transportation costs, lack of banking relations, lack of information on mutual demands and capabilities and lack of political and economic stability.