EghtesadOnline: Iran traded 10.81 million tons of non-oil commodities worth $6.33 billion with the VISTA group of countries in the last fiscal year (ended March 20, 2019) to register a 42.85% and 27.33% decline in tonnage and value respectively compared with the year before.

VISTA is an acronym referring to the emerging markets of Vietnam, Indonesia, South Africa, Turkey and Argentina. The concept was first proposed in 2006 by BRICs Economic Research Institute of Japan.

As a result, Iran recorded a non-oil trade surplus of $420.95 million with VISTA nations.

In terms of total trade value, Turkey topped the list among VISTA countries with Iran trade standing at 8.15 million tons worth $4.98 billion, indicating a 49.54% and 30.61% decrease in tonnage and value respectively YOY.

Turkey was Iran’s top export destination among the countries under review and sixth in the world. 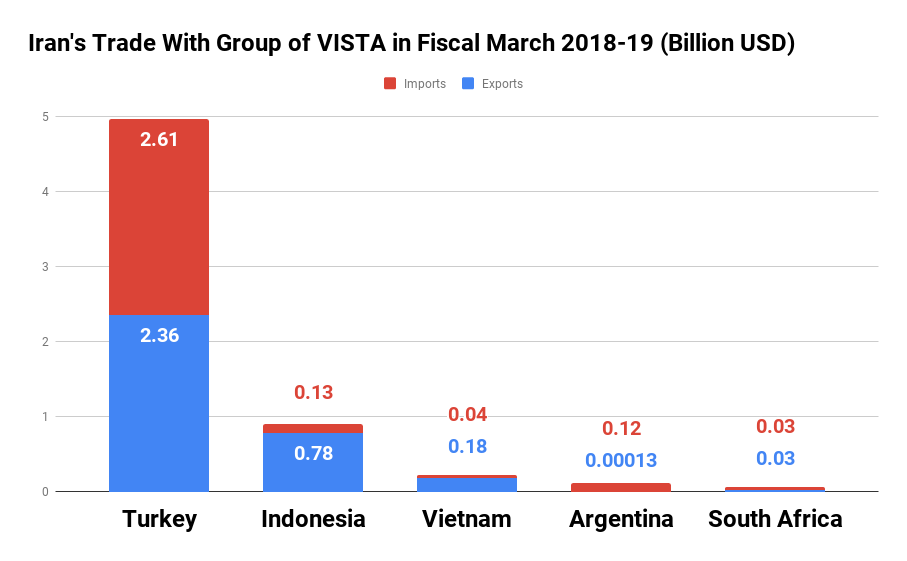 Turkey was the top exporter of goods to Iran among VISTA states and the third in the world after China and the UAE.

Indonesia was Iran’s second biggest trading partner among VISTA countries during the period, as two-way commercial exchanges stood at 2.24 million tons worth $917.86 million to register a 3.89% decline in tonnage and 0.52% increase in value YOY.

Indonesia was Iran’s second export destination among VISTA nations and ninth in the world during the 12-month period.

It imported 138,192 tons of commodities worth $131 million from Indonesia, down by 59.88% and 50.43% in tonnage and value respectively YOY, which mainly constituted paperboard paper, aluminum oxide, medium-density fibers, coconut and industrial alcohol.

Indonesia was the second exporter of goods to Iran among the states and 29th in the world.

Argentina was the third exporter of goods to Iran, after Turkey and Indonesia, among VISTA nations and 30th in the world, as Iran imported 161,405 tons worth $128.03 million during the 12-month period from Argentina to register a 26.86% and 28.02% increase in tonnage and value respectively YOY.