EghtesadOnline: Iran traded 4.84 million tons of non-oil commodities worth $7.24 billion with members of the Group of Seven during the last Iranian year (ended March 20, 2019) to register a 26.38% and 26.31% decline in tonnage and value respectively compared to the year before.

Latest data released by the Islamic Republic of Iran Customs Administration show Iran’s exports totaled 1.11 million tons worth $907.18 million during the year, indicating a 40.78% and 39.28% fall in tonnage and value respectively year-on-year.

As a result, Iran recorded $5.43 billion in non-oil trade deficit with G7 members, according to Financial Tribune.

The Group of Seven (G7) consists of Canada, France, Germany, Italy, Japan, the United Kingdom and the United States. These countries, with the seven largest IMF-described advanced economies in the world, represent 58% of the global net wealth ($317 trillion).

Germany was Iran’s second biggest export destination among the countries under review and 17th in the world. 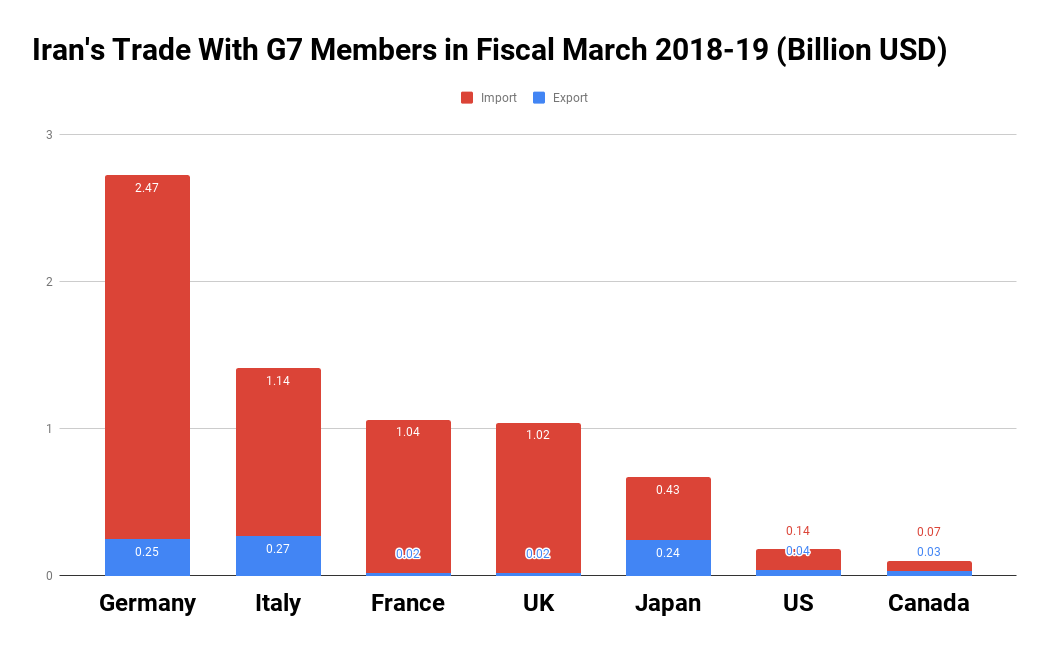 Germany was the top exporter of goods to Iran among the states and fifth in the world.

Italy was Iran’s second biggest trading partner among G7 members during the 12 months, as two-way commercial exchanges stood at 661,742 tons worth $1.42 billion to register a 36.35% and 23.56% decline in tonnage and value respectively YOY.

Italy was Iran’s top export destination among G7 countries and 16th in the world during the period.

Iran imported 148,609 tons of commodities worth $1.14 billion from Italy, down 27.26% and 20.31% in tonnage and value respectively YOY, a majority of which were screw air compressor, industrial furnace parts and baking machinery.

Italy was the second exporter of goods to Iran among G7 states and 10th exporter to Iran in the world.

Japan was Iran’s third export destination, after Italy and Germany, among G7 members and 20th in the world, as Iran exported 430,097 tons worth $241.28 million during the period to register a 56.64% and 42.79% decline in tonnage and value respectively YOY.