EghtesadOnline: Iran traded 4.39 million tons of non-oil commodities worth $1.81 billion with member economies of Asia-Pacific Economic Cooperation during the first Iranian month (March 21-April 20) to register a 29.41% growth in tonnage and a 24.24% decline in value compared with last year’s same month.

Latest data released by the Islamic Republic of Iran Customs Administration show Iran’s exports totaled 3.82 million tons worth $1.12 billion during the month ending April 20, indicating a 38.78% rise in tonnage and an 11.28% decrease in value year-on-year.

Asia-Pacific Economic Cooperation is an inter-governmental forum for 21 Pacific Rim member economies that promotes free trade throughout the region. Inspired from the success of the Association of Southeast Asian Nations’ series of post-ministerial conferences launched in the mid-1980s, APEC was established in 1989 in response to the growing interdependence of Asia-Pacific economies and the advent of regional trade blocs worldwide. It has 21 members.

APEC also aims to establish new markets for agricultural products and raw materials beyond Europe. Headquartered in Singapore, APEC is recognized as one of the oldest forums and highest-level multilateral blocs in the Asia-Pacific region and exerts a significant global influence.

The criterion for membership is that the member is a separate economy, rather than a state. As a result, APEC uses the term member economies rather than member countries to refer to its members.

In terms of total trade value, China topped the list among APEC member economies with Iran trade standing at 3.11 million tons worth $1.14 billion, up by 61.88% in tonnage and down 15.27% in value YOY.

China was Iran’s top export destination among the countries under review as well as in the world. 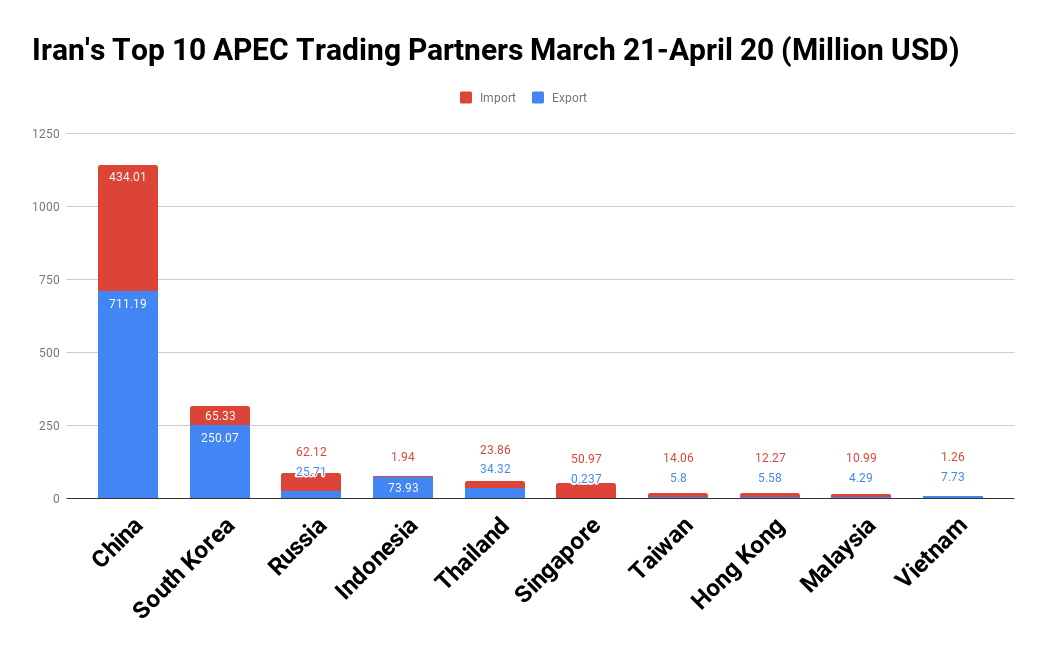 China was the top exporter of goods to Iran among APEC member economies and also worldwide.

South Korea was Iran’s second biggest trading partner among APEC member economies during the period under review, as two-way commercial exchanges stood at 511,565 tons worth $315.41 million to register a 19.8% rise in tonnage and a 8.84% decline in value YOY.

South Korea was Iran’s second export destination among APEC member economies and third in the world during the month.

It imported 27,057 tons of commodities worth $65.33 million from South Korea, down 52.34% and 54.75% in tonnage and value respectively YOY, most of which were auto parts, steel alloy rolled coil and transportation vehicles.

South Korea was the second exporter of goods to Iran among the states under review and ninth in the world.

Indonesia was Iran’s third export destination, after China and South Korea, among APEC member economies and ninth in the world, as Iran exported 190,664 tons worth $73.93 million during the period to register an 11.69% and 25.93% declines in tonnage and value respectively YOY.